While other kids his age were out cruising the streets of Karachi or hanging out at the local video game parlour, Shehzad Hyder was hailing buses to take him into the heart of the city to buy scrap metal, or he was holed up at home, hammering and moulding metal sheets and wires to fashion ancient suits of armour. An unusual hobby, to say the least, and a solitary one, but Shehzad’s passion for this craft has not waned since he cobbled together his first suit of armour at the age of 16.

The recently held exhibition at the VM Art Gallery showcased some 12 suits of armour, besides helmets, gauntlets and swords, meticulously crafted by Shehzad over the last many years. Ranging from Samurai armour to Turko Mughal, the display was a one-of-a-kind experience for Karachi viewers, and even those who do not frequent art exhibitions were lured by the romance and drama of these ancient recreations. Each suit of armour stands on its own, not only for its considerable aesthetic value, but also as a symbol of valour, of an ancient code of honour. Something of the collective unconscious seems to reside within these suits and history, imagination and sociology all impact us as we gaze at them. As a collection, these pieces seem to almost constitute a gallery of the dead, evoking awe and even a twinge of fear.

So what drove this young man to endure burns, injure muscles, even a slipped disc, to labour away at a hobby that did not till recently see the light of day? “When other kids were interested in GI Joe and Transformers action figures, I was always into knights in armour,” recalls Shehzad. “I remember watching movies and thinking that someone made this armour for the film so it can be done.”

Always good at working with his hands, Shehzad got a chance to put his ideas into practice for a school exhibition in his ‘O’ level year. He decided to make a suit of armour from the Ummayad period for a Pakistan Studies project. “That was a really bad piece of work,” he smiles self-deprecatingly. “I used a metal bowl for a helmet, steel wool to fashion chain mail and an old bathrobe on the sleeves of which I glued strips of metal.” But even though that schoolboy ingenuity did not measure up to Shehzad’s exacting standards of today, it won him accolades in school and encouraged him to continue on this path. 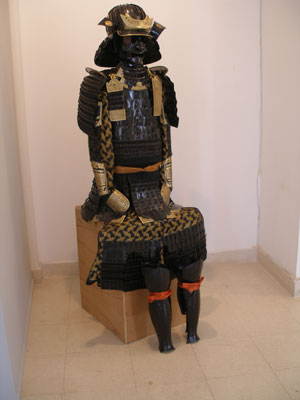 He had never seen an actual suit of armour, the only references he had at the time were through books and movies. “I was already into metal work. I would go to the welders and blacksmiths, knew where to get stuff. But I basically had to learn everything on my own, there was no one to guide me,” remembers Shehzad. “Today, I see people reaching out to me but at that time it was very frustrating. I couldn’t find books on metal smithing, couldn’t get the tools…I basically had to re-invent the wheel.” Shehzad explains how with chain mail, for instance, he managed to get a pattern but there were no instructions. “It was basically trial and error, I made many mistakes. Now I know that there are different formulas for chain mail — Indian, Spanish etc.”

The advent of the internet was a huge boon, of course, and allowed Shehzad not only access to information but to connect with other people who shared his passion. One such person is Steve Robinson, a certified Master of Artisitic Blacksmithing in the US who Shehzad has been communicating with regularly for many years now. In a testimonial written by him, which was displayed at the exhibition, Robinson describes Shehzad’s oeuvre in glowing terms. Today armour is made for films, to replace or repair museum pieces and by historical re-enactment societies. People like Robinson actually get to wear the pieces they make when they engage in re-enactments with others, but there are few enthusiasts like this young man from Pakistan who struggled in this arcane quest all alone. Over the years, Shehzad has honed his skills and this coupled with the meticulous research he pours into the work gives each piece historical as well as technical authenticity.

It comes as something of a surprise that although he has a bachelor’s degree in design from the Indus Valley School of Art, Shehzad subsequently went on to earn a veterinary degree. “I went to art school and took design, instead of say sculpture which may seem more logical for me, because it was the viable thing to do,” admits Shehzad. “I wasn’t a very good student,” he admits sheepishly. “But I was good at drawing so after ‘A’ levels, art school seemed like a good idea.” Although, Shehzad later abandoned design, he appreciates the time spent in art school. “It not only taught me to take my research more seriously but also encouraged me to challenge myself. Not to accept that something couldn’t be done, instead I had to learn to think out of the box to find solutions.” During his art school stint, Shehzad showed his work to an interested few and his final thesis was also based on a re-enactment society, of the kind that are popular in the West which use period costumes and armoury, but focusing on local history.

After graduating, he attempted to work in a design-related field but soon gave it up and turned his attention elsewhere. “My two abiding passions since childhood have been armour and animals,” explains Shehzad, who works with a local vet and is in fact leaving for Australia this summer to further pursue animal studies. This explains the exotic birds casually strolling in the garden and the pair of flamingos ensconced in a large wading pool. Shehzad’s workshop holds a few clues to the facets of his unusual personality. The carefully preserved skeleton of a flamingo rests on a shelf while the tools of his hobby, print outs and armour stencils cover the tables. A large poster of Tom Cruise resplendent in Samurai armour, donned for his film The Last Samurai, graces the wall. The machines and small furnace, the drawings and posters tell of the boyish fascination which grew into an abiding passion and serious skill. Besides suits of armour, Shehzad also crafts swords and other pieces of ancient weaponry by hand.

Although gratified by the response to his recent exhibition, Shehzad cherishes the experience more for his mother for whom it was a validation of her son’s efforts. “I could never have done any of this without the support of my parents,” says Shehzad. “At first they were confused. Most parents have other ambitions for their son; they don’t want to see him with a hammer in his hand all the time. But when they saw what I was making, they encouraged me, even though my mother thought I would get kidnapped, going off as I was in buses to Ranchore Lines.” For himself, at a personal level, critical acclaim was never a motivation. “I made these pieces for myself,” he explains. “I would say, ‘ok, I don’t have that one, let me make it.’ In fact, it is very hard letting go of them,” says Shehzad who has sold almost half of the pieces on display. “They have given me sleepless nights and blisters. They are like my children.”

When asked whether he considers what he does as art or craft, Shehzad says, “I don’t think one can really confine it. It overlaps many disciplines. But if I had to choose one category, I would say it is design because my work has both form and function. But it is closer to craft,” he claims, a little wary of contemporary art. “It’s a little annoying when a few brush strokes accompanied by an impressive statement or a conceptual idea get a lot of attention. It seems unfair that the craftsman who is labouring away does not merit the same appreciation.” As for Shehzad, much like the knights he idealises, he has persisted in his solitary quest to preserve an ancient lore and in doing so he has, inadvertently perhaps, rendered a unique service.