At least 95 Ahmedis were killed and nearly 100 injured in two dastardly attacks on their places of worship in Garhi Shahu and Model Town in Lahore. According to local police sources, around 10 terrorists, wearing suicide vests and armed with hand grenades and automatic weapons, attacked the worshippers who had gathered for Friday prayers. At the end of the five-and-a half-hour operation at the Garhi Shahu worship place and a relatively brief one at Model Town, two of the assailants were arrested while the rest blew themselves up.

The Ahmedis have consistently been targeted by sectarian outfits. They view themselves as Muslims, but following pressure from some Sunni religious parties, they were declared non-Muslims through a constitutional amendment passed in 1974 by the Bhutto government. Subsequently, the late president, General Zia-ul-Haq, introduced several anti-Ahmedi laws in the ’80s, including the controversial Blasphemy Law, adding to the miseries of the two million Ahmedis living in Pakistan.

Unfortunately, a certain section of the media, especially some Urdu newspapers and TV channels, have been actively engaged in instigating their audiences against the Ahmedis and other religious minorities, rendering their lives and properties insecure. Last year, well-known TV anchor Amir Liaquat was accused of inciting hatred against Ahmedis in his religious programme on Geo television, which allegedly resulted in the murder of two Ahmedis by fanatics in Sindh. Despite protests raised by civil society groups, Liaquat’s programme continues to be telecast. A few weeks back, Hamid Mir, another anchor from the same TV channel, was accused of using very irresponsible language against Ahmedis in a mobile phone conversation with a Tehrik-i-Taliban member — they are “worse than infidels,” he is reported to have told the TTP guy and accused Khalid Khwaja, a former ISI official who was then in their custody, of having links with the Ahmedi community, which allegedly may have led to his murder. (Mir disputes the claim that it was his voice on the mobile phone recording).

Shockingly, certain sections of the media in Pakistan appear to be more sympathetic to the Taliban and other terrorist outfits than they are to religious minorities.

In this carnage of Ahmedis, for instance, certain sections of the Urdu media were quick to accuse the Indian intelligence agency RAW and the Americans of being involved in the bloody incident. They continue to live in a state of denial. As does the Punjab government, which appears to be blind to the existence of militant outfits in South Punjab. Punjab Law Minister Rana Sanaullah told the media that the attackers had come from North and South Waziristan’s tribal belt where the Taliban have been running their self-styled government. What he failed to mention was that it was the Punjabi Taliban, who had trained in Waziristan and returned to the Punjab to carry out the deadly attacks. The Punjab branch of the Taliban comprises mainly the Lashkar-e-Jhangvi and Jaish-e-Mohammad, who have joined forces with the Taliban.

Last year, Ahmedis, Shias and Christians in various parts of the country had received threatening letters from various militant groups. Consequently, the Ahmedis along with the Human Rights Commission of Pakistan (HRCP) had requested the government to provide them security but their request was not taken seriously. The HRCP, in its last report, had stated that at least five members of the Ahmedi community were murdered in target killings in 2009, raising to 100 the number of murders since the introduction of anti-Ahmedi laws by the Zia-ul-Haq government in 1984.

The Pakistan Muslim League (PML-N) headed by an erstwhile Zia protegÃ©, which is in power in the Punjab now, is known to hold right-wing views and is often accused of having links with militant organisations.

Recently, his brother, the Punjab Chief Minister Shahbaz Sharif, drew a lot of flak when he publicly requested the Taliban not to attack the Punjab because they, like the Taliban, were opposed to the US drone attacks in Waziristan. And Punjab’s Law Minister Rana Sanaullah participated in an election rally with the leaders of a banned terrorist organisation in Jhang. Incidentally, many terrorists who attacked Christians in Gojra in 2009 came from that city.

In some instances, the police have succeeded in arresting the terrorists but the courts have released them “for want of evidence” much to the disappointment of the victims and their families. On May 25, the Supreme Court upheld the Lahore High Court’s decision to free Hafiz Saeed from house arrest by dismissing the appeals of the federal and Punjab governments for lack of evidence. Saeed is the notorious chief of the banned terrorist organisation, Lashkar-e-Tayyaba (LeT), which is now working in the garb of a ‘charity organisation’ called the Jamaat-ud-Dawa (JuD).

A question that still remains unanswered is, why didn’t the Punjab government take any security measures to protect the Ahmedis despite the federal interior ministry’s warnings of possible terrorist attacks on them? 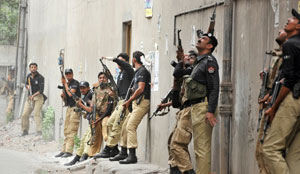 Police stand armed in their counter-attack against the terrorists in Lahore in May 2010. Photo: AFP

Following this latest attack on the Ahmedi community, other religious minorities living in the Punjab are feeling extremely vulnerable. And more so since the militants returned to Lahore’s Jinnah Hospital where one of the assailants was being treated, along with several other injured Ahmedis of the May 28 carnage.

There is no denying the fact that the Lahore attacks were the work of Punjab-based militant groups, and they need to be tackled just like the militants operating out of Waziristan in order to avert attacks of this nature in the near future.

Unless and until the establishment does not treat the country’s religious minorities as equal citizens and the media does not stop inciting hatred against them, the minorities will remain under constant threat from extremist forces.