Everyone is talking about an impending military operation in Pakistan’s North Waziristan tribal region — except those who are supposed to carry it out. The army high command and spokesmen have remained quiet, preferring a wait-and-see approach and calculating the next move without bothering about the unwanted attention that the country’s tribal borderland is receiving following Faisal Shahzad’s failed attempt to car-bomb New York’s famous Times Square.

It reminds one of the media hype prior to the big offensive by Pakistan’s security forces in Swat and the rest of the Malakand division from April to May last year and the subsequent military action in October 2010 in South Waziristan. The military certainly had plans to move against the Taliban militants in both these theatres of war, but the media became so obsessed with the issue that it seemed it wanted action sooner rather than later. On occasion it appeared that the military’s hand was forced to initiate action before time.

This is not the first time that the Pakistan Army command is letting it be known, without mentioning North Waziristan, that it would choose a timing of its own to open a new front in the war against militants. The military has made it amply clear that it would not take action due to pressure exerted by the US or any other power. This may not be wholly true, as there have been instances where US pressure has been so intense that Pakistan has been unable to resist it for long. However, the fact remains that the present command of the Pakistan Army has forged a close, trust-based relationship with US military commanders and the latter are willing to let their Pakistani counterparts decide the strategy and timing of their offensive in the country.

In the context of North Waziristan, Pakistan and the US have different sets of priorities. For Pakistan, the major threat is posed by the Mehsud and Punjabi Taliban militants linked to Hakimullah Mehsud’s Tehrik-i-Taliban Pakistan (TTP), who have taken refuge in North Waziristan after fleeing the October 2010 military operation in neighbouring South Waziristan. The foreign militants, affiliated with Al-Qaeda, the Islamic Movement of Uzbekistan (IMU) and other groups who are hiding in North Waziristan, also pose a threat to Pakistan and its security forces. The Afghan Taliban fighters associated with the Haqqani network are also foreign militants; who occasionally maintain a presence in North Waziristan after crossing over from Afghanistan, but they aren’t considered a threat to Pakistan’s security establishment — at least not at this stage.

Pakistan would have to decide whether to treat the Haqqani network as a friend or a foe once it firms up its policy towards the Afghan Taliban in the changing security situation in the region, particularly in Afghanistan. To a great extent this would depend on the US attitude towards the Afghan Taliban. Through its ongoing military offensives, the US and NATO forces are trying to defeat and weaken the Taliban to an extent that the latter agree to put down arms and seek peace on American terms. Failure on the battlefront would force the US to offer the Taliban a much better power-sharing deal and it would depend on the latter whether to accept or continue fighting for a decisive victory. The US would have to make up its mind by July 2011, the cut-off date announced by President Barack Obama for making a decision about the withdrawal of troops from Afghanistan. This would also be the time for Pakistan to choose its friends and foes from among the Afghan groups that are party to the dispute. 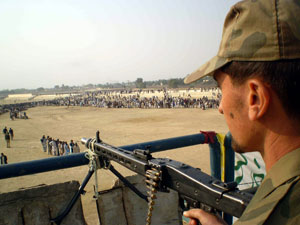 For the US, its choices in North Waziristan aren’t that complex. It considers all militants, whether Pakistani or those belonging to other nationalities, as enemies and would like Pakistan to adopt the same principle. No doubt the foreign militants belonging to Al-Qaeda, the IMU and the Haqqani Network are a bigger threat for the US and its allies, but the Pakistani Taliban and jihadis are no less dangerous because they provide sanctuaries to the foreigners. It doesn’t differentiate between the Pakistani and foreign militants while carrying out missile strikes from the CIA-operated drones in not just North Waziristan, but other Pakistani tribal areas as well. It definitely wants the Pakistani military to take on all the militants. The Haqqanis or the non-TTP militants, belonging to North Waziristan and commanded by Hafiz Gul Bahadur, won’t fully serve the purpose of the US-led coalition forces in Afghanistan.

In case the Pakistan military decides to initiate action in North Waziristan, it would first have to justify the move, as a peace accord between the government and the Hafiz Gul Bahadur-led militants is still in place. Reasons would have to be found to do away with the peace agreement. One such reason could be a violation due to the presence of outsiders, including the Mehsud and Punjabi Taliban militants are in North Waziristan. The end of the peace accord would also mean the coming together of all the militants, including those in and outside the TTP, on one platform to resist Pakistan’s security forces. The militants may not fight the superior Pakistani security forces and retreat in the same way that Hakimullah Mehsud’s TTP fighters did in South Waziristan last October. They would resort to guerilla attacks, acts of sabotage and the disruption of the army’s supply routes.

The Haqqani network would certainly not fight Pakistan’s security forces and prefer relocating elsewhere in the tribal areas and across the border in Afghanistan’s Khost and other provinces where the Afghan Taliban have a strong presence. Dislocation would certainly weaken the Haqqani Network, arguably the most powerful group among the Mullah Mohammad Omar-led Afghan Taliban, but it won’t mean the end of its fight against the NATO and Afghan government forces. 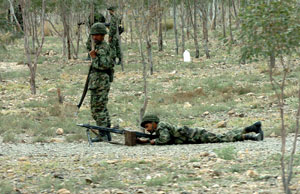 In terms of terrain and the militants’ strength, North Waziristan could be somewhat less of a challenge compared to South Waziristan. The military, which already has a considerable number of troops in North Waziristan, would have to make plans to control the three major population centres of Miramshah, Mir Ali and Dattakhel and keep its supply lines open. It could go for selective military operations against the militants who don’t belong to North Waziristan and try not to provoke Hafiz Gul Bahadur and his men, at least for the time being. It could attempt maintaining peace with one group of militants while fighting the other one, so that they don’t join hands to fight the security forces. This strategy worked last year when the Maulvi Nazeer-led militants in the Wana and Shakai areas of South Waziristan inhabited by the Ahmadzai Wazir tribe stayed neutral when the military launched its offensive against the TTP in the Mehsud-populated territory. The peace agreement with Hafiz Gul Bahadur at the time also enabled the military to keep him out of the battle as it took on Hakimullah Mehsud’s TTP fighters in South Waziristan.

Contrary to reports, any new military operation in North Waziristan won’t be the first in this tribal agency. There have been two big military offensive against the militants in North Waziristan and on both occasions the military failed to achieve victory and had to settle for unfavourable peace accords with the Taliban, including the one in September 2006 that drew strong criticism from the US and the Afghan government. In view of past failures, the new military operation would have to be larger in scope and better in strategy. It would be of a scale comparable to the operations undertaken in Swat and South Waziristan. And even then, there would be no guarantee that a successful military campaign in North Waziristan would result in a decisive defeat for the militants and end the conflict in northern Pakistan.