“I believe Gogi teaches you to laugh at yourself in the worst of situations”
– Nigar Nazar, CEO, Gogi Studios

Gogi is Nigar Nazar’s mouthpiece. A cartoon character, Gogi sounds off on every domestic issue under the sun.

Born in the ’70s from Nazar’s pen, the ageless Gogi has done the rounds of newspapers, magazines and TV channels in Pakistan and abroad. Nazar describes her as the symbol of the enlightened, energetic and adventurous Pakistani woman who refuses to kowtow to authority and finds humour in the most trying of situations — not unlike her creator, Nigar Nazar, the first woman cartoonist of Pakistan and CEO of Gogi Studios.

Q: What inspired you to address issues like social hypocrisy through an unconventional medium like Gogi, a cartoon character?

A: I read a lot of comics in my school days — and I still enjoy reading comic strips in newspapers. I’ve always felt that the art of cartoons is an appealing and powerful medium, and when used tactfully, it can bring about a change in our social fabric.

Q: What role do you believe Gogi plays in your readers’ lives?

A: When she was appearing in newspapers, many women could relate to her. She was a source of amusement to her readers.

I believe Gogi teaches you to laugh at yourself in the worst of situations. And we all need to do that.

Q: Who are the majority of Gogi’s followers?

A: I have been occupied with projects and storybooks for children for the past few years, so for the time being my readers are children. It’s nice to see the impact of these books on young children, especially the book on environment called The Garbage Monster. Children in public schools will soon be receiving schoolbags with eight fun books/comic books authored by me. They will be attending workshops in which they will be entertained with animated Gogi cartoon spots, live cartoons and tips on drawing cartoons. They will also receive sketchbooks and art supplies from Gogi Studios for this purpose.

Q: Have you ever been attacked for your cartoons?

A: Not really, but the sad part is that I haven’t received any encouragement either. For instance, the owners of the print media would rather use syndicated foreign comics instead of giving local cartoonists a chance.

Q: Your character’s image has been painted on seven buses in Pakistan. Where do these buses operate and what purpose do they serve?

A: These were nine Varan buses in Rawalpindi/Islamabad, three New Khan buses in Lahore, and two coasters which operated between Gujjar Khan, Gujrat and Pir Wadhai. These were part of a project that ran for a couple of years. 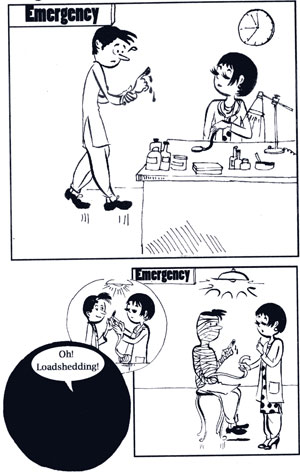 Q: You are involved with some charitable organisations as well. What sort of impact do your cartoons have on the under-privileged class in Pakistan?

A: A great deal of impact. They love the colourful cartoon books I give them, and every book conveys a message in a subtle manner. We would be quite happy if we were to succeed in changing the mindset of even two per cent of the children.

Q: You’ve attended many international conferences as a cartoonist. Have you ever faced any problems due to your nationality?

A: No. In fact, I feel proud to represent Pakistan as a woman for two reasons. Firstly, people overseas have a stereotypical image of Pakistani women. I would like to think that my being a female cartoonist dispels that image to a certain extent. Secondly, whether as a member of the international jury of cartoonists in Turkey, or as a founding member of APPACA (Asian Pacific Animators and Cartoonists Association) in China and the Congress of Cartoonists in Nepal and Malaysia, or as an invitee to the conference of cartoonists in Singapore, I almost always found myself to be the only woman cartoonist present. Interestingly, even the western countries were not represented by any women cartoonists.

It was a proud moment for me to be invited to the inauguration of the APPACA Congress in Quiyong and to be the first foreign speaker to give a presentation of my work. This was in August 2009. I have been extended another invitation for the Animation Conference in 2010.

Yes, I have been singled out many times, but only in a positive sense, as the first woman cartoonist from the Muslim world. Perhaps, I would not have attracted as much attention if I had not been from Pakistan.

Q: Using cartoons as a means of expressing oneself is quite uncommon among the Pakistani youth. Why is that so?

A: Somewhat, but if art colleges and the media can train and encourage more artists in this field, then perhaps one would witness a significant increase in output.

Q: Have you had any formal training in this field or did you just pick up a pen and start to draw?

A: For the first 10 years, I had no formal training. I worked hard, learning through books and manuals myself. Then I got the chance to do a correspondence course through a school in the UK. However, in my school days, I just doodled and drew a great deal.

Q: How have your cartoons impacted your own life?

A: They keep me committed to being optimistic and help me find humour in the toughest of situations. 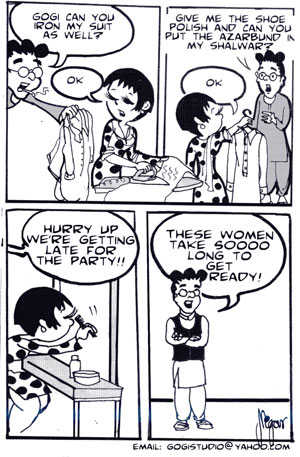 Q: Is Gogi’s character based on anyone or is she the product of your own imagination?

A: She is my mouthpiece and she represents the educated, enlightened and progressive women of Pakistan.

Q: What motivated you to draw Gogi?

A: I knew from the start that I would have a woman as the central character, so I conjured up a cute, young, lovable woman called Gogi.

Q: How would you describe Gogi?

A: In the words of a university student who has done a well-researched thesis on my work, “Gogi is the symbol of womanhood in Pakistan, with all her adventures and escapades in daily life.”