“Pakistani politicians have a tendency to enhance their own powers;
Zulfikar Ali Bhutto should have been different”
– Fatima Bhutto

Q: You say in your book “I am not my grandfather’s keeper,” yet you defend Mr Bhutto’s policies, unwavering in your support. Is this an accurate assessment?

A: I defend what I believe to be truly progressive about my grandfather’s politics — his independent bilateral foreign policy, his far-sightedness in launching land reforms and social justice initiatives and his imagination for Pakistan. But I very clearly criticise his government’s role in Balochistan and his tweaking of the constitution to enhance the powers of the executive.

Q: Was it difficult for you to detach yourself from family loyalties to write this book?

A: It was difficult to separate what I know of the people on whom I was researching and writing. They are not strangers to me, but nor do I pretend to treat them as such.

Q: You say in your book that “nationalisation was the only way forward.” Do you still feel our economy benefited from nationalisation, considering that most of the units are back in private hands?

A: History would say yes. Nationalisation took an economy run by oligarchs, 22 families who controlled the bulk of the nation’s wealth, and returned the resources and their profits to the people whose backbreaking labour our economy was, and is still built upon. It would not necessarily have been a permanent solution, but it was a step in the process of furthering more endogenous economic development.

Q: Some say Zulfikar Bhutto laid the groundwork for Islamisation with his ban on alcohol and his changes in the constitution with regards to the Ahmedi sect. What is your take?

A: I was very direct about my views on those issues. As I said earlier, Pakistani politicians have a tendency to enhance their own powers, Zulfikar Ali Bhutto should have been different. That he wasn’t was something I see as a mistake. The constant persecution of Ahmedis follows the same line — the Pakistani state has been intolerant of the Ahmedi community from the very beginning, as early as the 1950s. I wish that my grandfather had been different there too. And finally, to concede anything to the Islamists is a mistake.

Q: A prominent journalist described your book as a hagiography. How would you respond to that?

A: I would question the use of the word ‘prominent.’ Many others have defended Songs of Blood and Sword against that charge, including Imran Aslam who, as a journalist, was critical of the Bhuttos — all of them. It’s a personal and a political memoir. There are 15 pages of footnotes and everything in the book was thoroughly researched.

Q: How have your father’s political leanings affected the decisions you make today?

A: I learned alternative narratives from my mother Ghinwa and my father Murtaza. They were certainly never in line with establishment politics, and that opened up a world of political education for me.

Q: To remember our history and learn from it seems to be the purpose of your book. It seems like our country has, time and again, ignored its past, only to repeat the same mistakes. Do you think we, as a nation, are capable of democracy?

A: The Pakistani people are infinitely capable. The problem is the government.

Q: What do you make of President Zardari relinquishing the bulk of his powers by signing the 18th Amendment?

A: We need to read between the lines. I worry that as citizens we are not vigilant of the state. The president still retains the power to sack from parliament any member of his party. He has constantly bypassed the sanctity of the judiciary to protect his deputies, notably Rehman Malik. And we should remember that he came to the highest office in the land the same way that General Musharraf, a military dictator, did — by being chosen by his own parliament. Not through elections. 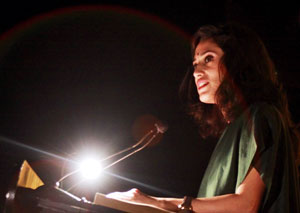 Q: What future do you see for yourself in Pakistan, politically or otherwise?

A: Currently? The longer this and all other corrupt and criminal governments remain in place, holding the country hostage to the will of foreign powers, we will see Pakistan continuing an unjust war against its own people, who have no voice and no rights to participation in government.

Q: Pakistan is faced with a plethora of problems today — which one of these should be prioritised by the government?

A: Corruption. The government’s inability to provide even the most basic services for its people — healthcare, education and justice — has created a vacuum filled by extremists and militants. The Pakistani Taliban exist today because they build madrassahs, offer alternative courts that dispense speedy ‘justice’ and control the law and order of the towns and villages they enter. If the state had done its job in those fields, we wouldn’t be in the precarious state we are in today.

Q: What impact has American policy had on Pakistan in the war on terror?

A: Disastrous. American influence in Pakistan today has subverted our sovereignty. We are at the mercy of Richard Holbrooke’s dictates and NATO’s plans for Afghanistan, while a foreign power invades our airspaces and kills our citizens. Never, never before in our history have we allowed a foreign power to bomb our people and never should we.

Q: The Bhutto name is akin to a political dynasty. Where do you stand on the issue of “rightful heirs” to lead the PPP?

A: The rightful heirs of the PPP, Zulfikar Ali Bhutto’s party, have always been and will always be the people of Pakistan. Anyone who believes otherwise never read the party’s original manifesto.