On May 26, Baitullah Mehsud made headlines again. The former Tehrik-i-Taliban leader was fingered by the Federal Investigation Agency (FIA) as the mastermind behind Benazir Bhutto’s murder.

The accusation was presented in a supplementary investigation report submitted to an anti-terrorism court hearing cases against five suspects allegedly involved in the assassination of the former prime minister in December 2007. The report is part of an investigation launched last year into the PPP leader’s death.

The FIA’s accusation came 881 days after Ms Bhutto’s death in Liaquat Bagh in Rawalpindi in late 2007.

Of course as most people will remember, the Ministry of Interior made the same assessment just one day after her assassination when Brig. (retd.) Javed Iqbal Cheema produced, as evidence, an intercepted telephone conversation of Baitullah Mehsud congratulating a man referred to as Maulvi Sahib for the kill.

So in the 880 days since, after millions of dollars spent and multiple investigations conducted involving various Pakistani authorities, Scotland Yard and most recently the United Nations, Pakistan has come full circle in the matter of the mysterious murder of Benazir Bhutto.

Of course, the UN commission’s report goes beyond Baitullah and “assesses hypotheses regarding possible culpabilities of individuals and entities that appeared to pose threats to Ms Bhutto.” Besides the Pakistani Taliban, these usual suspects include Al-Qaeda, other jihadi groups, the “Pakistani Establishment” (which includes the military high command, the intelligence agencies, certain political parties) and “those closest to her.” And in doing so, the commission was very critical of the Musharraf government’s knee-jerk reaction in blaming the former TTP chief. The government’s assertion “that Baitullah Mehsud and Al-Qaeda were responsible for the suicide bomber were made well before any proper investigation had been initiated.”

It went on to conclude that “other flaws in the JIT’s [Joint Investigation Team] approach to investigating Baitullah Mehsud’s alleged role in the assassination are also inconsistent with a genuine search for the truth.”

Moreover, the report states “The Commission finds it disturbing that little was done to investigate Baitullah Mehsud himself, Al-Qaeda and any individuals or organisations that might have worked on, supported or otherwise been involved directly or indirectly in the planning or execution of the assassination.”

The UN team, after writing extensively about Pakistan’s history of nurturing and working with jihadi groups, presents the idea that militant networks such as the TTP could have been used by intelligence agencies to carry out the attack on Ms Bhutto.

And in the final analysis the commission insinuates a big cover-up. “The Commission believes that the failure of the police to investigate effectively Ms Bhutto’s assassination was deliberate. These officials, in part fearing intelligence agencies’ involvement, were unsure of how vigorously they ought to pursue actions, which they knew, as professionals, they should have taken.”

Meanwhile, the recent FIA report presented to the court in May states that DNA evidence has been gathered from limbs of two alleged suicide bombers (Bilal and Ikramullah, who are mentioned by Maulvi Sahib in the infamous intercepted phone conversation) and matched with DNA found in the house of one of the five accused, Hasnain Gul.

It is an important development. But like all the facts presented in the UN Commission of Inquiry, the information and evidence needs to be applied to a competent criminal investigation with the intent of finding the perpetrators and bringing them to justice. But the perpetrators in this case go beyond the suicide bombers and their purported five accomplices. As the UN report implies, any investigation must focus on “investigating those further up the hierarchy [involved] in the planning, financing and execution of the assassination.”

The UN commission clearly states in its report that it hopes that their “report will help shed light on the truth behind this heinous crime and support steps toward ending impunity. It is solely up to the competent authorities to make this happen.”

The problem is that the 31,000-word report paints a picture of Pakistan where political violence is the norm, the police are not allowed to act independently, omnipresent “politicised intelligence agencies undermine democratic governance” and undertake clandestine actions that impede any independent search for the truth. In essence, the commission’s unflattering yet spot-on analysis of the country’s fatal flaws indirectly reconfirms the worst reality of all: determining the truth is impossible. In fact in Pakistan, truth has been made extinct. And by extension, so has justice. So even if Pakistan were to establish a “fully independent Truth and Reconciliation Commission to investigate political killings, disappearances and terrorism in recent years and to provide victims of political assassinations and terrorism material and moral reparations,” and undertake “police reform measures consistent with the principles of democratic policing” as suggested by the report’s authors, would the programmes work as designed? 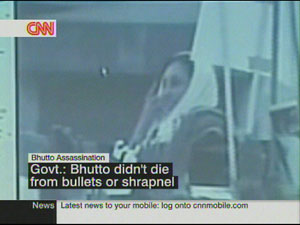 A still of TV news coverage in the wake of the murder of the former PPP leader. Photo: AFP

In fact, suspicions are already being confirmed. Within a month of the commission’s findings, a three-member fact-finding committee reportedly already cleared former Military Intelligence chief Major General Nadeem Ijaz Ahmad and the police officers, including CPO Saud Aziz, who were suspected in the UN report of being the key players responsible for hosing down the crime scene.

The UN inquiry may have allowed an independent third-party to confirm many details of events revolving around the murder and investigation of Benazir Bhutto (in addition to bringing forth some new information) but was it really necessary? Was it also necessary for outsiders to recommend a course of action full of democratic reforms everyone within Pakistan — by way of experiencing the country’s pathologies on a daily basis — already implicitly understands needs to be taken, many civil society groups currently work towards and, for that matter, seem like an impossibility given systemic corruption.

Moreover, was it necessary to go through this exercise if in our domestic investigations all roads lead to Baitullah Mehsud and stop there? Because if Baitullah Mehsud was an easy target to blame back in 2007 because of his increased profile following an unprecedented wave of TTP-led militant attacks that bloodied the country and shook the army, he is an exponentially easier target now: the trail grows cold and the man is dead.