Hillary Clinton’s throwaway remark, in the wake of the attempted car bombing of New York’s Times Square last month, that there would be dire consequences for Pakistan were there to be a successful terrorist attack in the United States that could be traced back to this country, prompted a fair amount of anger and angst. The reaction wasn’t particularly surprising. But then, nor was the US secretary of state’s open-ended “threat.”

Clinton was reacting, on a television talk show, to a fortuitously flimsy terrorist attack; she could hardly have been expected to say that her government would sit back and do nothing. She sensibly — and perhaps inevitably — steered clear of specifics. The Pakistani response, meanwhile, was related in part to the impression that as the alleged would-be perpetrator, Faisal Shahzad, was a naturalised US citizen, responsibility for his inclinations could not reasonably be sheeted home to his nation of origin.

There is something fatuous about that line of argument. There are, no doubt, many homegrown terrorists and would-be terrorists in the US, including Muslims, whose motivations and inclinations could not reasonably be related to Pakistan. Shahzad, however, does not fall in that category. And the category he does fall in — that of a Pakistani who successfully aspired to further education in the US and subsequently was able to settle down there — is inevitably disturbing for the American authorities, given that thousands of Pakistanis have followed a similar trajectory.

On the other hand, the fact that hardly any of them have betrayed any inclination to wreak havoc in their adopted homeland ought to be a source of affirmation to the effect that the trajectory between Pakistani origin and terrorist intent is decidedly not the path usually taken. It is not only an exception to the rule, but a remarkably rare one at that.

That does not, of course, lend credence to any of the conspiracy theories that have sprouted in the wake of the Times Square incident, most of them centering on the suspicion that the CIA or some other secretive agency concocted the entire affair. Their resemblance to the persisting insinuations that the US arranged for 9/11 in order to give itself an excuse to invade Muslim countries is no coincidence. Of course, the Bush administration did everything in its power to reinforce that fallacious impression, and Hillary Clinton’s vague but nonetheless ill-considered comment falls in much the same category. But it takes a mutilated mind to construe that as irrefutable evidence of anti-Muslim conspiracies.

Of course, one of the problems with Faisal Shahzad is that he does not conform to the jihadist prototype of a madrassa-educated, economically-deprived young man whose sense of alienation — quite possibly exacerbated by clerical propaganda in the local mosque — leads him to deeds of mass destruction. As the scion of a senior Pakistan Air Force officer, Faisal was accustomed to a relatively privileged existence, as evidenced by his dispatch to the US after he completed his schooling. There has been no indication that his journey thither was prompted by the desire to do harm to America. 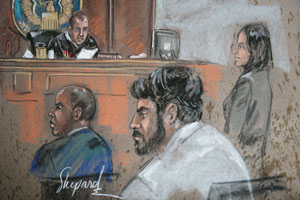 Much has been made of reported emails and conversations in which he apparently vented his anger at the invasion of Iraq, the situation in Palestine and so on. But that in itself is hardly remarkable. Plenty of Americans, regardless of their faith, have been appalled by their previous government’s mass murder in Iraq as well as by the continuing carnage in Afghanistan. A great many younger-generation American Jews are perturbed by Israeli behaviour and prospects for Palestine.

It could, perhaps, be taken for granted that the majority of Muslim Americans, particularly those of recent overseas origin — be it Indian Pakistani, Arab or Indonesian — are less than comfortable with aspects of their adopted country’s foreign policy. A certain proportion is likely to be angered by it. Sufficiently angered, perhaps, to take part in demonstrations, or to vent their thoughts in print or through online forums. But decidedly disinclined, nonetheless, to take the lives of fellow Americans.

Faisal Shahzad is therefore an exception, albeit hardly unique. And it certainly makes no sense to deny the relevance of his Pakistani origins, regardless of whether there is much truth in insinuations of his Pakistani connections. The American and Pakistani authorities, as well as ostensible Taliban sources, have been ambivalent in this regard. Some have indicated a connection — including lessons in putting together and setting off improvised explosive devices — with the Taliban in North or South Waziristan, while others have ruled it out.

What arguably matters most, however, is not whether Shahzad consulted the Taliban, but why he was evidently determined to take innocent lives at one of the busiest spots in New York. It would probably take a thorough psychiatric investigation to discover precisely what triggered his murderous intent, but it does not require a great deal of imagination to conclude that his upbringing in Pakistan played a role. This is not to suggest that his parents or the educational institutions he attended are in any way culpable, but the atmosphere in which he came of age certainly cannot be disregarded.

Many Pakistanis are repelled by the idea of their country being considered the world’s foremost terrorist hub. Their frustration is understandable, and there can be little doubt that the US played a crucial role in transforming Pakistan into this sort of entity. But America could not have achieved this on its own. Nor, for that matter, could General Zia-ul-Haq — even though his rule was in so many respects the worst thing that happened to Pakistan since its inception.

Whatever Pakistan’s pro-jihadist inclinations may have been prior to 1977, there can be no doubt whatsoever of their exponential growth in the wake of the jihad in Afghanistan (it was only the Soviet Union and a few of its allies who in those days dared to describe the mujahideen as terrorists), and among the first regions to be infected, following Moscow’s decision to withdraw from Kabul, was Kashmir.

Among the jihadists invigorated by the latter challenge was the British-born Omar Saeed Sheikh, who was arrested in India in 1994 for his role in the kidnapping of western tourists in Kashmir, and freed five years later as part of a deal with the hijackers of an Indian Airlines plane that was forced to land in Kabul. Saeed Sheikh, who was educated mainly in Britain (including at the London School of Economics) but also spent a couple of years at the elitist Aitchison College in Lahore, played a prominent part in the 2002 abduction of The Wall Street Journal’s correspondent Daniel Pearl. 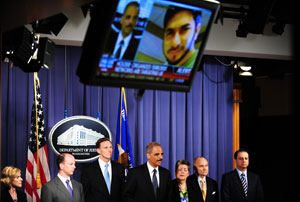 US officials talk about the Times Square incident. Photo: AFP

Pearl, who was evidently investigating the nexus between jihadists and Pakistan’s Inter-Services Intelligence agency (ISI), which was instrumental in the Taliban capture of Kabul, was cruelly executed after being compelled to “confess” his Jewish origins. When Saeed Sheikh’s arrest in this connection was announced, it turned out that he had surrendered to the ISI a week earlier. It was subsequently suggested that he was associated not just with Jaish-e-Mohammed but also with the British intelligence agency MI6, and possibly even with the CIA.

These charges were never corroborated, but a couple of years ago it was reported that, having smuggled a mobile phone into his cell, Saeed Sheikh came close to instigating a war between Pakistan and India by making a provocative phone call to President Asif Ali Zardari while pretending to be the Indian foreign secretary. He also attempted phone calls to Indian officials while pretending to be Zardari, but was thwarted by better screening systems.

The mass murderers who wreaked havoc late last month in two Lahore mosques frequented by Ahmedis were apparently not jihadists of the Omar Saeed Sheikh or Faisal Shahzad ilk, and their transgression naturally entailed no threat from Hillary Clinton. Fundamentalists who slaughter each other on the basis of sectarian differences do not substantially bother the US, which itself is pretty indiscriminate when it comes to mass murder. Guatemala, Vietnam, Nicaragua, Iraq and Afghanistan are the most obvious, albeit not the only, examples of this trend.

But Washington’s actions — indistinguishable in many ways from other terrorist transgressions — can hardly serve as an excuse for taking innocent lives. Two moral wrongs don’t make a moral right. It’s easy to say but impossible to prove that psychopaths such as Omar Saeed Sheikh and idiots such as Faisal Shahzad would give up their wicked ways were the US to change its counterproductive strategies. Both sides, however, would benefit from a cessation of indiscriminate violence, and from pondering both the motivations behind and the consequences of their unrewarding actions.