“I am not an activist or a feminist” 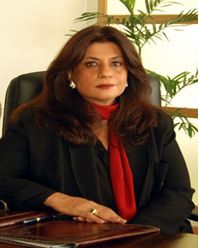 Q: What is it like being a single, successful career woman in banking — traditionally considered solely a man’s world?

A: During my schooling, college and university years, the 11 years at UBL, and the 15 years at the Women’s Bank, I don’t remember a single moment when I have not been very focused and striving for quality in my own work. It is tough making it to the top. More than anything, I think, it all depends on you and the decisions you make. When you take a direction in your career, you have to be focused. For me the most important thing was not that I’m a woman. I often say that I am not an activist or a feminist — for me my culture, my religious norms, my social values, my moral values etc., have been a critically important part of my life.

Q: Why do you say you are not an activist as the charter of your bank is to empower women?

A: There is a typical image of an activist…

A: No no, it’s being aggressive. The reason for my success is that throughout my life, I have received a lot of support from the men in my life — my father, my brothers, my son, who is now 26 years old. And then there has been support from people at my university and in the banking industry. You’ve got to learn to take that support and move forward. You cannot do it in total isolation.

Q: But don’t you feel that being a woman, especially as there were not too many women in the banking sector at the time you started your career, you have had to be very aggressive to move ahead in a male-dominated environment?

A: No, there were women around even at the time I joined banking in 1979. That was the time when women were being hired, especially at UBL, so there were women before me. I think the difference was that I have always been a perfectionist. Banking is very logical, but it’s an art and a science; it’s creative and it focuses on human relationships.

Yes, being in the position that I hold right now is lonely and it is tough. But then I think I’ve been very lucky with my support systems. As a woman banker I had to prove myself every step of the way. Working as a woman in banking is hard, but I was harder on myself than anyone else could ever be. There you are, standing very tall, very alone, scrutinised intensively. One little step in the wrong direction, one mistake, and you are out.

Q: Today you are the only woman president of a bank — but it’s only a bank for women. Do you think it’s as far as a woman banker could go? Or is there scope for women presidents in other privatised or national banks in Pakistan?

A: I am the only woman on the board of directors apart from the representation from the ministry of women. But in the future this may change. I would love to see that happening in other banks, but I don’t see it happening at this time. Apart from local banks, even when you look at foreign banks, there is a level that a women will get to — vice president, or senior vice-president, and nothing beyond that. But looking at the banking industry during the last three four years, you will see a lot of changes, like for example, in human resources. That is an area we have seen a lot of women come up. They are now holding positions in corporate credit, syndications and other things, and I think there is a growing respect for a woman’s mind. We have seen these new trends take place in Pakistan during the last five years, so I think the most important thing is to create an enabling environment.

Q: Do you feel it’s a burden being a role model for Pakistani women?

A: Sometimes these are the demands of the job. For example, I am a very emotional person by nature , but the demand of my work is financial discipline, it’s all about being the custodian of peoples’ trust and money. That’s a lot of pressure that you carry as a professional.

In the banking industry there has to be a code of conduct. That puts a lot of pressure on me, but it’s a way of life for me. I mean that’s a kind of discipline that is in me as a person, and it has to be further fortified to demonstrate to the people around me. You carry a burden when you become a role model — you are taking on a huge responsibility. There is a whole force of women that looks up to you and God help me, I can’t afford to let them down. So that’s the sacrifice, the price you pay for being in the position I am.

Q: Has your personal life suffered as a result of your devotion to your career?

A: I think you have to learn to manage to balance your life and that’s a lesson we are all trying to learn. You know if your career is a major focus for you, sometimes there is an imbalance and you neglect yourself. I do acknowledge the fact that there have been times where I have not been to kind to myself, but such are the pressures of juggling your personal life and your professional life. You have to pay the price. I may have suffered a little bit, but I’ve managed well.

Q: Is success worth the sacrifice of a personal life?

A: To a great extent I have sacrificed myself, to a certain extent I think I had to sacrifice time with my little son. But my little son is no longer little. Today when I see him — my greatest love — I see someone whose mind I love and respect, and it’s mutual and we’re friends. One of the biggest things I used to worry about was that when my son came home for holidays from Aitchison College, where he was a boarder, I was never there at lunch. That was a big guilt. After all, when I came home from school, I always I had a mother waiting for me. But I tried with all that was within me to make it up to Ali, and I think today he has no complaints. We have a beautiful relationship, and I am very proud of that.