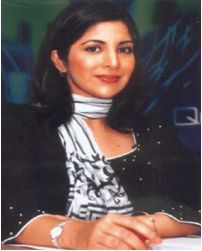 Q: You had a great job with the UN and had spent your entire life abroad. What made you decide to move to Pakistan?

A: My parents had moved back from London and, of course, the usual cultural concerns, that once a girl has graduated and gets to her mid-twenties, surfaced. The M word started popping up. So yes, they wanted me to move back.

Q: How difficult was the move?

A: I had been here only for vacations and people treat you a lot differently then from when you live here. It was very difficult. I didn’t have any school or university friends. I had relatives, cousins, but I hadn’t grown up with them. I hadn’t had any shared experiences, or memories. Being a Pakistani I felt different from other people. This was my country, but I somehow didn’t seem to fit in. But I was determined that I would give myself at least two to three years here.

Q: You did a news programme for Indus TV which took you out on the streets of Karachi. Were you the only woman there?

A: Yes, I was. I had my crew with me, and my director, but it was difficult, people staring and passing the odd comment. But because I was speaking in English, I think they just assumed that I was a foreigner and a reporter. So they didn’t bother me too much, I think Pakistani women get [hassled] much more. It was difficult because I realised that you have to strike a balance between what’s acceptable in this culture and what you would like the public to think about and debate. Changing attitudes is a difficult job. You have to do it in a way that keeps people receptive. You can’t offend or challenge them openly. I learnt a great deal.

Q: Following your stint with Indus TV you hosted Question Time Pakistan for BBC and did a series of Hard Talk Pakistan — all very upmarket and high profile. Did your gender help open doors?

A: In the beginning, yes, people might watch you, because they wonder, can she do it? But I think that the novelty wears off. It’s difficult for a woman to do a hardcore current affairs and politics show. Even in England I can’t think of anyone who’s had a long-standing current affairs show. I mean women might read the news…

Q: So do you think Pakistani women have more opportunities here in the media?

A: I feel they are getting more as the media is mushrooming so quickly… it can’t keep up with itself, and you just don’t have that many people. So if women do have the ability, they are going to get chosen because the openings are there. Also, I think the lesson has been learnt to some extent in Pakistan that the best print journalists aren’t necessarily men, so that’s going to give women more of an opportunity as well. The hard part is being doubted about your ability to handle [shows on] current affairs, which I find really patronising. I think it is shocking that people do this even with me when I’ve got the academic credentials to back me up, and yet they still imply that a male journalist would be better at the job.

Q: Being a woman do you think you have to push harder to get what you want?

A: As a woman, the odds are stacked against you. So the more assets you have on your side, the easier it is to overcome those odds. If I didn’t have my education it would have been harder because I would have had to somehow prove to people that I had the intellectual capacity to do the show. Because I had the education, they tried to look for another angle [to get at me] which turned out to be that I hadn’t lived in Pakistan. I think with men it’s a presumption that they are competent; with women people start off with the presumption that they are there because they have a pretty face.

Q: That notwithstanding, don’t you think though that with so many women on TV today and the mushrooming of the electronic media, women are becoming more empowered and that society’s perception of them is changing, however slowly?

A: It is changing, definitely. When I first told people in my famiy I was going to be on TV they were concerned because the image of a woman on TV was not good. Now it’s considered a profession, and a respected professional choice for a woman. And that came about because educated women started coming into the field, started taking themselves seriously and improving their skills.

Q: Do you think people have judged you in any way?

A: I am quite lucky in the sense that largely I have a reputation which is pretty solid. Within the short span of three years, people sort of count me as a brand name and they respect me. That has a lot to do with being an outsider and having no constituency, backing or affiliations. I have largely escaped the intrusion [into my life] that I know a lot of other women face in theirs, but they are more from the entertainment side, which is very glamorous and different.

Q: When you came here was there any cultural shock?

A: Yes, there was a huge cultural shock, because I went to a dinner party at somebody’s house, and I was the only one who wasn’t drinking or smoking. And I was the one who had come from abroad and grown up there. I was less westernised than people who had grown up here all their lives.

Q: Has your freedom been restricted in any way in Pakistan.

A: I do miss just being able to walk on the street, yes, just going for a stroll without being stared at, or feeling insecure about male attention, being anonymous. We have such an incestuous society, because everybody knows everyone, you have no anonymity. People are more concerned with other peoples’ business so that restricts your freedom. And they automatically make assumptions about you, which I don’t like, because I think that restricts creativity and innovation. What I miss the most about England is the intellectual stimulation.

Q: Do you think life would be easier for you in this society if you were married?

A: Yes, I think because people still view a single female with a certain amount of curiosity. There is a side to them that somehow can’t get beyond the fact that all women do not have to be married. You could say you have just won the Nobel Prize for literature, but they will still ask when you are getting married. It’s like you are doing other things only as a build-up to getting married. Just because you are in your late 20s and you are not married, it should not be looked at with suspicion.

Q: So are you worried about what people say?

A: No I have never been one of those people who think that I must get married. It’s not something that evokes any passion in me. Having a professional goal is something that excites me; it gives me a real adrenaline rush. I believe marriage is one of those things that is not in my control. It is like adolescence or coming of age — you can’t force it upon yourself.

Q: Do you think it has become more acceptable for women to marry later?

A: I think so, because all my friends are getting married post 25, whereas before, when I was a kid, my cousins got married at the age of 20-21. By the time you graduate and do your Masters and you work a couple of years, you are 25. And you need to travel and see the world. It opens your mind. I think you make better parents.

Q:A large number of successful professional women in Pakistan are single. What do you attribute that to?

A: I think part of it is because when you do rise to a certain level in your profession, you have to give more than the average, you need to put in a certain number of hours. So that time commitment is largely only possible if you do not have family responsibilities.

Q: Would you marry a guy who would want you to stop working?

A: No, because that means that person does not like me for me, because work is part of my personality, I cannot sit at home. Of course everybody needs an income, but I don’t do it because of financial gain. Even if I came into a hundred million tomorrow,I would do it. Because I am passionate about society, it is what makes me tick. And somebody who would tell me not to do that could not understand me as a person.

Q: Do you think men are intimidated by working women?

A: They are definitely intimidated, they are wary of working women. It takes a really secure and confident man to deal with the fact that his partner might be getting more attention than him or might be the centre of attention. Most men don’t have that confidence.

Q: Do you think it is harder to find men like that in Pakistan?

A: Yes, because it is a male-dominated society.

Q: In terms of your personal life, do you find it difficult living at home with your parents, as compared to being on your own?

A: I like it because it is comfortable, and I feel secure. And believe it or not, I have a curfew. It is quite embarrassing. I have to be home on the dot of 1:00 am, and so am constantly reminded that to them I am still a child. And that irrespective of the fact that I may be being seen on BBC World, and asking the President of the country anything, but when I come home, my dad is still worried. But that’s the part of our culture that I like. It’s really a blessing to have parents who love you so much, and support you and care for you.