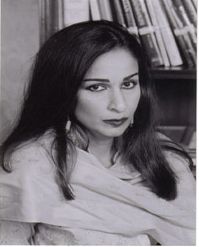 Q: Have the fortunes of women across all sections of society improved in any significant way over the past few years?

A: The statistics don’t tell a positive story, unfortunately. The first step to a woman’s empowerment is her degree of education, and girl children all over the country, especially Sindh, have high dropout rates from school and dwindling enrolment. On the other hand, more women come out to work than ever before, but that too is not always a clear index of how much control a woman exercises over life, her choices and the income she brings in. Social change is affecting women’s lives in many ways, but the outcome is not nearly as empowering as we tend to expect. Publicly and politically, women occupy more space than they ever did before in Pakistan, but at the same time there are higher numbers of women that are victimised on account of their gender, so it’s a mixed and not entirely pretty picture.

Q: Has the introduction of women parliamentarians made any significant difference in highlighting women’s issues? How do you feel about women opposing your bill on the Protection and Empowerment of Women Act 2003?

A: The increase in the number of women parliamentarians has significantly changed the nature of the agenda in the political mainstream, although there is a long way to go before women measure their success as politicians by what they have been able to achieve for other women. While it is true that many women colluded in opposing my Empowerment of Women Bill or even our Honour Killings Bill, they did so as members of political parties, bound by the regressive political culture of their organisations. Some did it out of misplaced ideological commitments, like the MMA women for instance, who seem to have little voice in their own parties’ decision-making bodies but are used as shock troops by their own male party leaders to attack progressive women and all the baggage of reform we try to bring with us into parliament. But what is most heart-breaking is to see educated women on the treasury benches twisting and turning with the political wind, using women’s rights language to get ahead in the world, but abandoning their cause in the pursuit of ministries and even a lot less. It is for this reason that we were never able to form a caucus that actually addressed issues head-on. No one, except men and women from the PPP, were willing to do that.

Q: Was it a difficult climb to the top — both as a woman editor of the Herald and as a woman politician?

A: I have always had to work very hard for whatever I have achieved, much like most women at the top who know that they will have to put in more hours, deliver twice as good as anyone else to even stand a chance. Opportunities do play a huge part in everyone’s life, of course, and I am privileged to have had a solid education and scholarships abroad. I would not valorise women like myself as having achieved a great deal by printing cover stories that endangered many of our lives, if not our jobs as editors, because in English journalism it is almost an advantage being a woman. You can work longer hours on less pay than male colleagues who typically have to support families by themselves. But, in politics, the backroom-old-boy culture is very, very hard to overcome. It is only my party, the PPP, where women are given senior positions in the mainstream, outside the women’s wings, without a feudal background necessarily. There is a grudging respect for one after a while, but even in my party a woman has to prove herself via the sheer hard work route, and often finds herself confronted by a glass ceiling.