“If one wants one can intellectualise and complicate the simplest things” 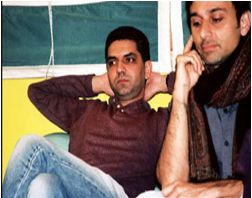 Q: Javaid Shampoo was shown recently at the Kara Film Festival in Karachi and at Matteela and Rafi Peer World Performing Arts Festival in Lahore. How do you think the audiences responded — did they “get” the movie?

A: I wasn’t present at the Kara Film Festival screening in Karachi. People who were there say it was well received. It was very well received at Matteela in Lahore where it showed twice. Very few people were able to watch it at the Rafi Peer Festival for which there seem to be several reasons but there is little point in going into those. It was the first time Rafi Peer Festival screened films and some problems were to be expected. I trust it will be a much better affair the next time

I don’t know if the audience “got” the movie, as you put it. I would like to think that the movie was fairly “gettable.” We were just trying to say a few things through a simple story without “intellectualising” or “arty-fying” anything. But then if one wants one can intellectualise and complicate the simplest things. If the film is able to keep a diverse audience interested for its seventy-one minutes then as far as I am concerned that audience is “getting” it. There are very few, if any, hidden and deeper “meanings” in Javaid Shampoo that we deliberately put there. Nevertheless, the arty types are welcome to their own fun and to explore depths that were not in the minds of the film-makers when they were making the film.

Q: How do you and Faisal Rehman split the writing/directing chores? Who does what? What is the creative process from idea to execution. I’m talking with particular regard to how the two of you work together.

A: Faisal and I have done three projects together. Two features, i.e World Ka Centre and Javaid Shampoo and an adaptation for Indus TV of Manto’s Kaali Shalwar. We don’t work together any longer and our partnership, “Turun Talky” is now dissolved. But while we did work together, a project got executed by itself with each of us doing what he did better. I can’t think of a formula but I can tell you with specific reference to Javaid Shampoo.

While looking for a certain outdoor location for Kaali Shalwar we met this boy who does what JS does i.e. make counterfeit shampoos. We thought there might be a full film there. At the same time we were thinking of making something around a party/get-together. We decided that neither concept was a full film but that both could be fused in a simple plot and enable us to say quite a few things. We met every second or third day in the evening after work to chalk out the plot. That done I started writing the scenes. Faisal would read them as I wrote and offer comments, if any. When we had the script we marked our locations and did shot divisioning. At shootings, I worked with the actors on their acting (though most actors were good enough as they were and fully understood what was required of them) and Faisal was behind the camera. He changed some of the original shot divisioning but I didn’t have any problem with that since it was for the better. Things did happen quite smoothly actually. The writing etc took about a month-and-a half and the shooting and editing another month. Since both of us have other full time professions, we did things slowly and at our leisure.

Q: Javaid Shampoo hinges on a crucial long scene at a get-together of friends. The acting by your cast in that scene was quite natural and the dialogues actually brilliant. How was that scene shot? Did it require a lot of rehearsal and/or was there a lot of improvisation? Did the actors stick to the script or did they ad lib?

A: We have always tried to work with non-actors as much as possible. Other than Saniya Ansari, everyone in that scene is a non-actor. It was a two-camera scene with pre-decided shot divisioning but some of it was changed by Faisal on the spot. Except rarely, these were long single takes. Non- actors never memorise their lines and that’s a pain. In Javaid Shampoo, as opposed to World Ka Centre, I was reluctant to allow much ad lib as the dialogues were tight and precise. However, if an actor had problems with a certain word or phrase, it would be OK to change it. We had to rehearse before scenes quite often, not so much to elicit the “right” acting as to ensure that the dialogues were remembered.

Q: Javaid Shampoo has been invited to the next Munich Film Festival. How does that feel? Any expectations?

A:It is a happy thing of course. I am clueless as to what to expect. For one, it will be very good exposure.

Q: What’s the next project?

A: One film a year or even every two years would be pretty good. I am writing a script presently for a feature film which I hope to begin shooting around October/November. It is to be produced by Mridu Chandra, a film maker from New York who is in Pakistan for a while to teach film-making at Beaconhouse National University. We are hoping it will turn out well.

Q: If one wants to buy/rent a copy of Javaid Shampoo how does one do that?

A: One can’t buy or rent JS. The reason is that we sold it to GEO six months ago. They are neither airing it nor releasing it in any other way. Now they say they will air it after Moharram. But I don’t really know. They aired World Ka Centre pretty quickly….I can only wonder about JS. Perhaps when they have aired it they may be amenable to making DVDs of it for sale. I really don’t know. If I knew they would just sit on it for ages, I would probably not have sold it.