“In another life, I want to be a man, because I want to sock everybody” 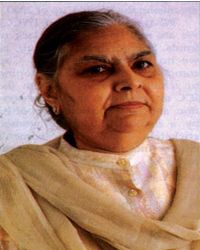 Q: Was being a woman an advantage or a disadvantage in your profession?

A: I think life is what you make of it. There are people who have everything and yet don’t do anything at all. I think that I’ve made good use of the fact that I could go places. I could get into places where my male colleagues couldn’t go. There was rarely a situation where I couldn’t get in because I never suffered from any kind of lack of confidence or diffidence. My advantage was that I had the backing of my family. Besides, I think no matter how macho people are here — and they are, I can vouch for that — if you are persistent enough and if you know how to handle them, they do become a little amenable. If you want to beat them, don’t join them, be faster than them.

Q: Were you ever treated differently because of your gender?

A: I often think about these things. Maybe I was treated differently, but because I didn’t have that kind of chip on my shoulder, I never felt it. I was very particular about how I dressed. The way you dress makes a very big difference, because this is one of the things in offices and kutcheris and thanas that they notice. You need to be dressed very conservatively. I would be with my male colleagues all the time and I did whatever they did. We went to chai shops and I would sit on the bench outside and have chai. But, I would not go to a paan shop and ask for paan although I used to eat 16 paans a day. Strangely in our society, women don’t go to paan shops. So I’m careful about those things.

Q: You agree that we live in a man’s world. What kinds of issues did you face as a female government employee?

A: We certainly live in a man’s world. The system is built keeping that in mind. They say there should be a Pakistani, European or Muslim bathroom in a new building, but where is the bathroom for women? These are the kinds of things you deal with. I have also said openly at forums that there is harassment, even at government offices. It’s very subtly done. They work in two ways: either they don’t take notice of you. You could be at a meeting and if you open your mouth, they won’t even look at you. I felt it even when I joined the cabinet. The bureaucrats would give you the impression that they were not listening to you at all.

The second way is that they hound you. They give you work and a time-line to finish it in that is not possible for anybody to achieve, let alone a woman. They’ll see that you are not sent on scholarships or conferences where you can make a mark for yourself. The government itself reinforces this. If you see training programmes for agriculture, who goes for the training for new machines for sowing or tractors? It’s the men. But who does the work? Sixty-eight per cent of the work in agriculture, all the back-breaking work, for which machines should be imported, is done by women. I make it a point, and did so even when I was in the ministry, to see that wherever, I could send women — not by depriving men of any training that they could take, but if a woman and a man could go, I would see that both would go.

Q: Has being single been an advantage?

A: I’m sure it has been an advantage. You don’t have to bother about getting permission from somebody. I was married but I got divorced after five years because the gentleman had an ego as large as life and he couldn’t bear to see that I was on radio and that I wanted to make a career. So I told my father to file a case for khula. I didn’t want anything from him, so I gave up everything and chose my freedom instead.

Q: Did you ever want to remarry?

A: No. After my divorce I got so involved in my teacher’s union and in my own career as a teacher that I never thought about it. It was a bad experience so I didn’t want marriage again. Again, family support is essential. If my family had said ‘you have done the wrong thing, go on and get married again,’ etc, I would probabaly have been in a quandary.

Q: Being in your position as a public figure, in a society where a woman is raised to be married, didn’t you face social pressures being divorced?

A: No. Nobody ever asked me. Obviously when I was younger, people must have thought about it, but nobody had the guts to ask me. The thing is that I’m never interested in people’s personal lives. Unless someone wants to tell me something, I would never ask anybody a personal question and that’s probably why I shut other people off from asking me personal questions.

But one does think about it, especially as one gets older. As a younger, tougher woman, people take you seriously. When you get older, they tend to treat you like a child. They try to imply that you are senile. I think it’s a question of personal circumstances and choice, definitely. If you are well off, don’t need financial support and can manage on your own, I suppose it’s fine. If I had to live on Napier road, maybe it wouldn’t be easy to live alone.

Q: Are you ever lonely?

A: No, I have so many friends. The day is too short for me, I don’t get to bed till about two or three in the morning. At one stage I was making animals out of clay. Then I started learning how to do miniatures, not human figures, only borders. I used to sit the whole night doing that. I’ve got something going all the time. I rarely get time. I’m engrossed in my work, and also the futures of the people who are working for me. You have to be interested in people and I really believe that if you’re in a position where you’re lucky enough not to have to think about your bread and butter too much, and you can fight for other people and can give someone else an advantage they didn’t have, then it’s your duty to do so. But I’m no saint, believe me, I flare up very easily.

Q: Do you think your being divorced affected your status as a teacher, given the ‘respectability’ factor usually associated with the profession?

A: As a teacher, I only had boys in my class at SM College, and it was a goonda college! We had boys from the lower middle-class, people who came from Landhi, etc. I was there from ’61 to ’85 and I never asked for a transfer from that college because I thought these were the boys who needed my help. They were late starters, so most of them were men, much taller and tougher than I was. I used to box their ears, I’d pull their hair, rip up their pockets! But I think this is the kind of communication skill that develops once you show them that you care for them.

Q: From a teacher to a minister, did you ever think you would be so successful?

A: What do you call success? Did I think I would become a minister? Well, I always did nurture the idea of being in politics and being in an assembly. I must have fancied myself and thought I could speak well, etc. I am not afraid of admitting things that I know are human weaknesses, and I loved being minister. Yes, when I became minister, I thought that was a level of achievement for a teacher. I thought it was a reward, a recognition, not as much of my capacity and capability, but of what we as teachers had been able to do. Of course, in private one also likes to think ‘I’m great.’ But I realise that not 10 percent of the people have had the opportunities that I have.

Q: In retrospect, is there anything you would want to change?

A: I don’t know whether I should say this… but in another life, I want to be a man, because I want to sock everybody! There’s one thing that one needs, and that’s physical strength. Perhaps I should see a therapist, but really, I’d like to be a man. I really wish I had gone into law or politics much earlier, not just as I did by chance. If I were born a man, I’d slug people left and right. I’m no pacifist. I’m sorry, I’m not one of those people who believes that in Pakistan, democracy, equality and this kind of thing is working very well. Either you’ve got to have a nation that is educated, and when I’m talking about education, I’m talking about awareness, responsibility, patriotism, etc. Unless you’re that kind of nation, there seems to be no other way that you can get justice for people, except by slugging them. You see old people in rags, with nobody to help them. What’s happening? Where is Islam? Where is humanity? I remember as a minister, I refused to have a gunman, mobile or protection. What kind of a person am I if I need protection from my own people? You know these people who go about with mobiles and hooters on their cars… I feel like going up to them and jabbing them! Those are the moments that I wish I had the strength to do that.