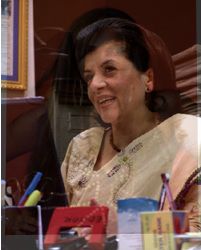 Q: Did you quit Libas because of professional rivalry, or the cliched ‘women can’t work together’ problem?

A: Sehyr Saigol is not the easiest person to work for. She was living in Lahore, I was in London and she would constantly be issuing orders without any consideration for the time difference. One day BBC called and asked me to come and talk about the magazine. Sehyr ordered me not to do it unless she was there. But it was free publicity, and we didn’t have the budget to spend on advertising. So, I did it and she became extremely negative. When you’re in your twenties, you’re rather intimidated by someone in their forties. I simply left of my own volition because I felt that working for her was no longer tenable. I started work straightaway with Ringier, the largest media group in Switzerland, and was posted in Hong Kong for the launch of their business magazine, Bullion.

Q: Given the problems single women face in society, why did you decide to come back to Pakistan?

A: I was in two minds about, but my parents had a house in Karachi, and the package The News had offered me included transport. So I chose to move to Pakistan. My family lived in East Africa, but my mother was very attached to her sister in Karachi, so we were always brought here in our youth and developed a love for Pakistan. As bureau chief, Pakistan, for the firm I worked with for a year long before joining The News, I had made contacts. I had also attended Grammar School while my parents were living here and remained in contact with friends from my class who are all in influential positions today. So that influenced my decision to move here.

Q: In a patriarchal society like ours, was being a single working woman restrictive or empowering?

A: I have every freedom here. Now I have independence as well, because I am of a certain age. When you’re in your twenties, you don’t have that. Nothing frightens me anymore, because my family and I have been through a lot. I have fought and survived and live to fight another day.

Q: You have reportedly had to battle a great deal of resentment from the staff at The News. Do you think part of this owes to your gender, and would a man have faced the same problems?

A: The resentment part is totally true. I was an unknown. I belonged to what they considered a foreign, privileged bracket. They thought I was an airhead without a complete understanding of social, cultural or political issues. Our society is very male-dominated. Whenever you go to government offices, or official functions, invariably I’m the only woman present. But that has never scared me because of the way I was brought up.

Q: Did you have to be more aggressive and work harder to prove yourself?

A: Initially, I was received very negatively. My first invitation, to the Governor’s house, was a luncheon. All the big-boss, old-fogey editors were in attendance and I could see a wall of blankness and resentment. I thought, ‘I can sink or I can swim.’ So I said in a very loud voice, “Good afternoon, gentlemen!” And it shook up everyone into gentlemanly politeness. You need to be on the ball and retaliate. [If people unfairly judge you]. At the office, the reputation that preceded me was of a fluffy, fashion journo, coming to run a newspaper. What would I know about The News? They didn’t know that I came from a news background or any of my other credentials.

Q: Did you manage to earn the respect of your colleagues?

A: You cannot demand respect from someone — they won’t respect you if they don’t. But you carry on and do your job as best as you can. I’m a boarding school child, so I have this jolly hockey sticks attitude! You play to win!

Q: And yet, The News has brought in a male editor to work with you. Have you been sidelined and fallen victim to office politics, or is it the gender thing again?

A: Do you think it is easy to run three stations with a huge staff and compete with other English language dailies and bring out a different product? Being an editor is a team effort. If your team is good, you win. The first two years, I worked really hard, as I was doing three people’s work. We are number one in the country, but we had to make improvements. So we are inviting the best to come and join us.

Q: Did you, as the editor, bring more women into the workforce?

A: There is a culture here, where parents do not want their daughters out at night, or putting themselves at risk, as journalists covering courts, jails, socially deprived areas, etc. Journalists are also not paid very well. Transportation is a problem. To get a young lady home at two a.m., when the paper is put to bed, is not palatable for many people. I have a woman at the publicity desk to cover women’s affairs. We also had a single girl who has left. But I do focus on women. We broke the Shaista Almani story on the front page. I insisted we highlight the issue and let Shaista have her day in court.

Q: A large number of women who have made it to the top of their professions are single, either having been unmarried or having gone through a divorce. Do men hold women back?

A: That’s a rather hypothetical question. Every marriage is unique. Because of economics, we have the joint family system. Women always have to play a dual role in this society. Men are considered the breadwinners. Those women who nurture their children to take on the world, and tell them that they are as good as their brothers and who encourage their daughters to work — those are the successful women. What we find in this generation is that mothers have changed. There is more equality, partnerships are equal. But you can’t forget the social and cultural context.

Q: Is it difficult being a single woman in the workplace?

A: It is undoubtedly tough in the workplace. I face it everyday. Do you know, that when I enter a room full of men, I still have to take a deep breath and think, “Right, let me go in there and tackle it.” At business dinners, where bankers and the financial community are guests, I am often the only woman present, as none of them have brought their wives along. I am there because I have to be there.

Q: How does that make you feel?

A: Unfortunate, because all the nice men are taken!

Q: Would you marry again, if you could?

A: Why not! But it would have to be someone who understands my nature. After all this time, I can’t be shut up in a box and be subservient to someone who tells me what to do. After a certain stage in one’s life, one becomes a whole lot more independent and not everyone can appreciate that. Very rarely do you find one partner that is not controlling.

Q: Do women have a harder time proving themselves?

A: Yes, I believe so. Because of the imbalance in the male-female ratio, women have to cope with double the workload, and their households and children as well.

Q: So being single can be an advantage at work?

A: It is very hard to juggle so many balls in the air. I can say that comfortably, because all my friends have children in their teens. I can compare, because I have no such responsibility, I can go off and focus on my career completely, but they can’t. They are seniors in their respective organisations, but there is always a split of focus. To go that extra mile you need that extra time.

Q: Does living alone scare you?

Q: And how about if your newspaper comes under threat?

A: The other day when the Jang offices were attacked, I had left the parking lot just two minutes earlier, where a lot of cars were smashed by the mob. That was a little alarming. But one can’t be afraid or think about risk if one wants to be a journalist.