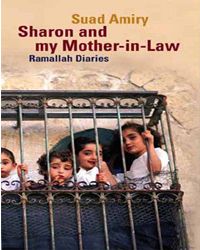 “Perhaps one day I may forgive you for putting us under curfew for forty-two days, but I will never forgive you for obliging me to have my mother-in-law with us for what seemed more like forty-two years.” When my friend Samar, who is from Jerusalem, handed me this book with the comment that really, nothing could be more trying than to have your mother-in-law live with you during a curfew in the occupied territories, I was taken aback. Amidst all the death and destruction, people are still able to have a relationship as irreverently funny as between mother-in-law and daughter-in-law. But then there are breathing flesh and blood people living in the occupied territories and they are not merely statistics. In spite of all the brutality they have been subjected to, they have not surrendered their humanity, human emotions and relationships. Reading Sharon and my Mother-in- Law was indeed an eye-opener.

The usual books on Palestine can be divided into two categories, the tedious political ones with dates and accords and UN resolutions, or the very lyrical, existential accounts of the diaspora. Sharon and my Mother-in-Law is different. In a place where the absurd is a feature of daily life, it must take a particular kind of sensibility to cope and even find some humour and irony in it. With all the violence around, it must be hard to keep one’s sanity intact, and for Suad Amiry the means to do so was to write her daily experiences in the form of a diary. “Writing my personal war diaries…started as a form of therapy during this period ( 17 November, 2001, to 26 September, 2002). Late in the evening I would often sit down and send e-mails to friends and relatives who were anxious to know what life was like for me during those terrible times. Writing was an attempt to release the tension caused and compounded by Sharon and my mother-in-law. I hesitantly shared these thoughts with some intimate friends.” The book was born out of these e-mails when her friends persuaded her to publish them.

The book spans the years 1981 to 2004 and begins with the journey Amiry makes away from her mother and Amman, the city where she grew up and lived most of her life, to Ramallah, a town under Israeli occupation. The trip was meant to be for six months, but it turned out to be a life-long journey. In Ramallah she lived, fell in love, married and acquired a mother-in-law. The diaries include accounts of her everyday life under the occupation and her frequent encounters with the Israeli civil administrator and soldiers.

From the book we learn the almost farcical situation under occupation where even daily chores such as buying food and visiting friends and relatives become tasks requiring mammoth mental and physical preparations. Getting groceries in a city of 70,000 people, with the mere hour-long lifting of a curfew, does not make shopping easy — especially when there is the mother-in-law, who will eat only at certain times, and off certain-sized plates. Amiry tells us about the life and gossip of her neighborhood in Ramallah, and the struggle to live a normal life in an insane situation — from the impossibility of acquiring gas masks during the first Gulf War, to her dog, Nura, acquiring a Jerusalem passport when thousands of Palestinians could not.

Amiry was awarded a Palestinian identity after battling for it for seven years. These papers, however, restrict her movement as she is not allowed to visit Jerusalem, which is only 10 kilometres away. Going to Nablus or Bethlehem, or for that matter any other West Bank town is all but impossible due to the vast numbers of Israeli checkpoints. The checkpoints make each town an isolated unit and a trip that should take 40 or so minutes can take up to three hours. Then there is always the risk of gunfire, from soldiers or from Israeli settlers, but, “it was a dear friend of mine, Bilal Hammad, who taught me once, as we were crossing the unbelievable crowded and chaotic Jordanian-Syrian border, how to step out of the frame and observe the senselessness of the moment. As the years passed, this became a valuable self-defence mechanism against the Israeli occupation of our lives and soul. Only through taking ‘ one step to the side of life’ could I observe and recount the absurdity of my life and the lives of others.”

Totally devastated by the construction of the infamous wall, Amiry writes, “I could not tell whether it was the image of the high concrete wall, or the image of Abu Mohammad planting olive trees against the wall or the deathly sad look of the lioness in the zoo, or the Palestinian being beaten up in the military cage at Qalandria checkpoint, or the tears quietly running down Leila’s cheek as we drove back, that caused my stomach ache to continue for the whole of Thursday…..as I lay there I recalled what Ariel Sharon had said in 1973….[on] how Israel will deal with the Palestinians: “We’ll make a pastrami sandwich of them. We’ll insert Jewish settlements in between the Palestinians, and then another strip of Jewish settlements right across the West Bank, so that in twenty-five years, neither the United Nations, nor the USA, nobody, will be able to tear it apart.’ (Water and Land Grab Report, 2003)…it had taken Sharon an extra five years to make a concrete wrapper around the pastrami sandwich.”

Suad Amiry is the founder and director of the ‘Riwaq Centre for Architectural Conservation’ in Ramallah. After growing up between Amman, Damascus, Beirut and Cairo, she went on to study architecture in Beirut, Michigan and Edinburgh. Since then she has lived in Ramallah. Rights to Sharon and my Mother-in-Law have been sold in 11 countries so far, including Germany, Spain, Portugal, Brazil, Denmark, France, Italy and Israel and it recently won the prestigious Viareggio Prize in Italy.