The Seamy Side of Justice

Last month the Indian media was buzzing with news of the recent flak received by the police for releasing a rape victim’s name in New Delhi’s satellite city, Noida. The police went on to add that the 17-year old victim of the gang-rape, though still a minor, had gone out with the rapists for a drink, “making her perhaps more pliable and liable to the crime.” India is still stunned about the late night rape like this one in Noida on February 24. It was right on the city road and, that too, in a moving car.

The state of West Bengal is also no stranger to assaults on women and a similar incident happened in Kolkata on February 5, a city not notorious for such crimes. The victim was put under unnecessary media glare and was asked to recount the horrific crime again and again. To protect her identity, the media chose to blur her face, most of the time. Even though a ratings-and-circulation obsessed media largely supported her, they extracted their pound of flesh by requiring her to be present at television studios, at their beck and call, to recount the incident with sufficient emotion.

The facts are as follows: a young Anglo-Indian woman was befriended by a group of young people at a club in the city’s night entertainment hub, Park Street. The young men, protecting themselves with false identities, offered the woman a lift in their car while she was looking for a cab and she walked straight into their trap. Later, she claimed she was raped at gunpoint by one of the men and beaten up inside the car. Finally, she was thrown out of the car at a crossing in the downtown area.

But what followed the rape was even worse. After mustering the necessary courage, the woman decided to lodge a complaint at the Park Street police station, two days later. The police behaved shamelessly and jeered at her mercilessly. Apparently one of the cops even asked her to accompany him for beer in the same night club where the attackers of the woman had befriended her. In India, a rape victim has to pay the price for a brush with the law.

Since the perpetrators had impersonated other men, the hapless victim initially identified the wrong men from Facebook rather than the real culprits, thereby complicating the case. She then approached the media, and, subsequently, various news channels ran the story of the woman’s horrific experience in her home city — once known for its chivalrous men-folk and now ruled by a woman chief minister.

Things were looking up when a feisty woman police officer, in charge of probing the case, was finally close to unearthing the truth. But the West Bengal chief minister, Mamata Banerjee, suddenly stepped in stating that the incident was fabricated to malign her government. It led to a government official casting slurs on the character of the victim and suggesting that she could be from an escort service. A minister of Banerjee’s Trinamool Congress party even asked what a mother of two girls was doing on Park Street at the dead of night. Allegations and counter-allegations flew thick and fast and the opposition communists, smarting from their ignominious defeat in the state elections, got a potent weapon to attack the government. In no time at all, the entire episode took a political colour while none existed at the onset.

So where in free, democratic India does a woman go if she is sexually assaulted and left with deep physical and mental scars? Does she go to the police, to opposition politicians or to the media? Ironically, the answer right now is the media. It seems that via a media-sponsored jamboree, her case would get publicity and could potentially pressure the government to take some action. It’s a shame that, even now, a woman in India cannot go to a police station alone to quietly lodge a complaint, undergo a medical test and then await proper investigation. She has to go to the media, give in to all their logistical requirements and then be heard. This is what you call rape in the time of the electronic media.

Why has India, with all its moral posturing and democratic institutions, failed to make a woman feel safe and confident at a police station? 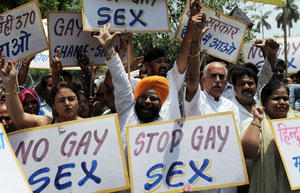 In 2009, a landmark judgement by the Delhi High Court decriminalised homosexuality in India. This was considered a giant leap forward for pluralism in society and an acceptance of those with an alternate sexual lifestyle. But what was most striking was the decision of the Congress-led government in New Delhi to tacitly support the judgement by not challenging it. Given the social, religious and cultural prejudices on the issue, this was perhaps a convenient, but laudable and understated stand that the government could take. But goofing up is the hallmark of governments in South Asia.

While the Delhi High court decriminalised homosexuality in Section 377 of the Indian Penal Code (IPC ) — Section 377 refers to that section of the penal code in several former British colonies that criminalises homosexual acts — India’s Home Ministry did a classic flip-flop on the issue. On February 23 this year, in an apparent contradiction of the ruling government’s earlier stand, the Home Ministry told the court, in an affidavit, that “gay sex is against the social order and is immoral.” Meanwhile, a division bench was hearing appeals filed against the decriminalisation of homosexuality by the Delhi High Court.

As the media started reporting the government’s contradictory position, the Home Ministry was quick to clarify that it had not taken any stand on homosexuality vis-a-vis its decriminalisation by the Delhi High Court in 2009 and that the affidavit was an old one. The ministry issued a press release to clarify its stand, saying it would not challenge the Delhi High Court verdict.

On February 28, India’s Supreme Court slammed the government for its prevaricating position on the issue and asked it to come clean instead of wasting the judiciary’s time. The government, much to the relief of the alternate sexual minority and all progressive thinking people, told the apex court that it supports the judgement of the Delhi High Court that struck down Section 377 and decriminalised same-sex ties.

Politicians in India tend to send confusing signals, ranging from opposition, to doubt, to support. Last year, India’s Health Minister, Ghulam Nabi Azad, drew flak from the press and the public when he called homosexuality a disease. It’s time the government came out of the closet. 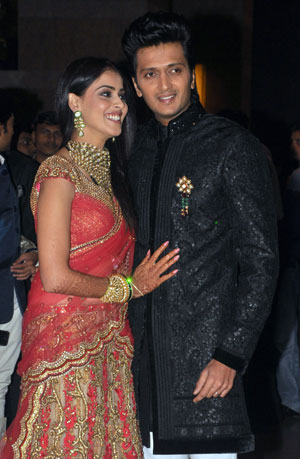 February witnessed a candy-floss wedding in tinseltown. Two Bollywood actors, who are not A-listers but have a good fan-following thanks to their charming screen presence and natural acting skills, finally got hitched. After dating for nearly eight years, Riteish Deshmukh and Genelia D’Souza tied the knot in Mumbai.

Genelia belongs to a Mangalorean Catholic family, while Deshmukh is the son of Vilasrao Deshmukh, the former chief minister of Maharashtra, and now a federal minister. The wedding saw an interesting mix of Bollywood actors and politicians, who all partied till the wee hours of the morning. The last to arrive was Shahrukh Khan —at 1:30 am.

The Genelia-Riteish romance blossomed on the set of their debut film Tujhe Meri Kasam in 2003. Subsequently they were seen together in the Indra Kumar multi-starrer comedy, Masti, and their latest flick, Tere Naal Love Ho Gaya, was released in Pakistan in the first week of March.

This article was originally published in the March issue of Newsline under the headline “The Seamy Side of Justice.”