Before the US Congressional hearing on Balochistan took place, nobody who matters in Pakistan wastalking about the widely misunderstood and much maligned nationalists of that territory. Now everybody is talking about them and as aimlessly as ever.

The government has been indicating its plans to build half-way houses; political parties in the opposition are promising to redress the grievances of the Baloch as soon as they come to power; the army is exchanging notes with the prime minister in secret and the electronic media has found a live issue for debates, with all its wise men in attendance. But it is doubtful if the mountain of words expended since the first week of February 2012 has facilitated a wholesome appreciation of the Balochistan issue, or brought us closer to a resolution.

In its first response, the government floated the idea of an All-Parties Conference, but it was not clear whether the moot was meant to evolve a consensus among the so-called national parties on the degree of accommodation to be offered to the Baloch dissidents, or whether a serious interaction with the latter too was contemplated. The move got a cold reception from the main opposition party, the Nawaz Sharif League, and a complete rejection by the Baloch leaders in exile, which reduced the chances of the participation of genuine political parties from Balochistan.

The government’s second move was the interior minister’s announcement that all cases against Baloch nationalists were either being withdrawn or had been withdrawn. This step could have produced some effect if it had been presented as a policy decision to grant a general amnesty to Balochistan’s dissidents. It could have possibly yielded good results if Prime Minister Gilani had formulated a policy package in the parliament, including amnesty and some concrete offers to the Balochistan people and issued a white paper on how far the government was prepared to placate the “angry brothers.” The interior minister’s overture, too, failed to have any dramatic impact.

Since the army has been in the driving seat in Balochistan for 50 years, and more so since 1999, it was expected to join the fire-fighting operations, especially in view of the fact that it has started expressing its views on political and legal issues. All that it was required to say was that while it would submit its security concerns to the policy-makers, it would follow and carry out the decisions of the constitutional authority. Its reluctance to say this in so many words prevents Balochistan nationalists from putting their trust in the government’s capacity to accommodate them adequately and fairly.

At the same time, both the foreign and interior ministries have continued harping on their favourite theme that foreign hands are formenting all the trouble in Balochistan. Apart from condemning a resolution moved in the US Congress as unwarranted interference in Pakistan’s internal affairs, no evidence of foreign support to the Balochistan dissidents has been shared with the public. However, assuming that external forces are fuelling unrest and insurgency, they can only be accused of exploiting a situation created by indigenous factors. By no stretch of imagination can foreign hands be blamed for sowing the seeds of the Baloch’s alienation from an oppressive regime maintained by force alone. And when it comes to exploiting public grievances in neighbouring countries, Pakistan ’s own hands are not exactly clean.

Moreover, it is impossible to ignore the fact that Islamabad has consistently added to its own difficulties by failing to acknowledge the democratic aspirations of Balochistan’s politicians. Leave aside the Kalat Assembly’s independence resolution of 1947, or the military operation against the Khan, or the Pakhtuns’ lament on the extinction of the separate identity of British Balochistan, or the grand intrigue for the creation of the One Unit, or even the shameless manoeuvres carried out to sack the NAP government, and look at the contemptuous manner in which Balochistan’s rejection of authoritarianism has been disposed of not only by Islamabad, but also by the country’s mainstream parties.

No Balochistan leader strove harder than Ghous Bakhsh Bizenjo to defend the integrity of Pakistan, even at the risk of annoying his friends and followers. When he asked the MRD leaders in 1981 to add a provision to the constitution to the effect that if military rule was again imposed in the country, Balochistan would have the right to secede (the concept of secession as a constitutional right did not frighten politicians, who were familiar with the rise of federations as voluntary associations of political entities and the debate on the Cabinet Mission plan of 1946 as a means to resolve India’s constitutional problem), Bizenjo revealed not only his ability to read the mind of the young Baloch generation of the day, but also his capacity to foresee the consequences of Islamabad’s continued repudiation of democratic federalism in favour of keeping Balochistan within a spurious federation by the sheer force of arms.

Bizenjo’s warning was ignored by the parties that had come together to resist Zia’s military regime. Subsequently, Ataullah Mengal was driven out of politics, Khair Bakhsh Marri was wrongly imprisoned, Balach Marri was eliminated in extremely suspicious circumstances and Mohammad Akbar Bugti, the most easily manageable of all the Baloch hardliners, was foolishly liquidated. Finally, the operations were extended to the second rank of Baloch politicians, the killing of student leaders and activists and the desecration of their corpses, which alienated a large number of conscious citizens of Balochistan from the state. Clearly Balochistan’s alienation had its origin in Islamabad’s decision to run the federation as a unitary state, and in its exclusion from the race for post-independence gains. 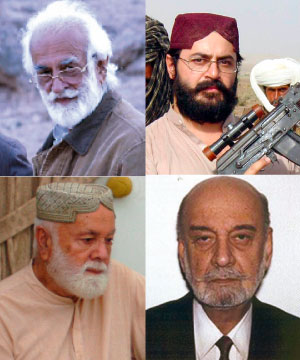 And yet the chorus about every trouble in Balochistan being the foreigners’ handiwork continues. Even the proverbial ostriches might feel embarrassed at being superseded. The powers that be need to realise that by their present actions they are internationalising the Balochistan issue. This does not mean the denial of a new power game around Balochistan. But Pakistan cannot defend itself against the new super-power rivalry by pushing Baloch nationalists into one camp or the other.

Meanwhile, the electronic media found it possible to introduce Harbiyar Marri and Brahamdagh Bugti to their large Pakistani audience. Some notice was also taken of the Kalat prince who is reported to have drawn up his Unilateral Declaration of Independence (UDI) letter quite some time ago. The position taken by the young Marri and Bugti leaders in exile suffers from no ambiguity. As a consequence, those of Balochistan’s political actors who are still associated with Pakistani political institutions will find negotiations with Islamabad more hazardous than ever. Now PEMRA has jumped into the fray and is threatening local TV channels with dire consequences if they telecast ‘seditious ideas.’ But the link between the Baloch leaders-in-exile and their followers/sympathisers cannot easily be broken. PEMRA has no power to stop the international channels from allowing Baloch nationalists to have their say and it cannot put a lid on the internet either.

Further, the government policy, especially the free rein allowed to security forces in the province, has thoroughly eroded the position of the Balochistan wing of the establishment. The president is asking Governor Magsi to use his influence with his community, while the latter is known to have protested (and offered to resign) repeatedly against being reduced to a governor in name only. That the Balochistan chief minister is at the sufferance of bureaucrats in Islamabad is no secret. Stories of the Balochistan Assemblys becoming an all-ministers’ club, or about the huge payments made to keep the MPAs in line are no longer dismissed as harmless jokes. It is becoming increasingly difficult to find, among the pro-government actors in Balochistan, persons capable of engaging the citizens in a serious political dialogue. You may talk to them but they can deliver little.

True, all political issues can be, and ought to be, solved through negotiations. But in the case of Balochistan two obstacles bar the way to fruitful negotiations. First, the negotiation route is said to have been rejected by the country’s high command because it believes that Balochistan is not militarily as unmanageable as East Bengal was, and therefore the federal link can be preserved by force. Hence, there is no need to talk to the lowly Balochistan people. Those who hold this view draw strength from analysts who maintain that a majority of the people of Balochistan do not wish to break away from Pakistan. Even if that were true today it would be unwise to believe they will never change their mind. Secondly, as matters stand, negotiations are possible only with political elements that have little credibility with or power over the people.

The crux of the matter is that Balochistan has been alienated to an extent that is only a little short of the point of no return. The traditional palliatives will not work. If the government wishes to have meaningful talks, it will have to reach out to the Baloch leaders in exile. Islamabad will have to step out of its make-believe world and boldly face the truth. Any such initiative will require the services of emissaries of standing and authority, capable of engaging the other party in a serious exchange away from the glare of publicity. Even such mediators will not be able to get anywhere without a tacit understanding that Islamabad accepts Balochistan’s rights in principle and will respect the verdict of the people, and that talks will be on the steps necessary to ascertain their wishes.

This article was originally published in the March 2012 issue of Newsline under the headline “Point of No Return.”