On February 9, Mein — The Artist and the Selfexhibition at Koel marked the third anniversary of the art gallery. The show featured works by 85 artists who had previously showcased their work in the gallery and included big names such as Amin Gulgee, Asim Butt, R.M Naeem, Imran Mir, Mehr Afroz and Nahid Raza. The theme was simple: mein or me, and the works on display were of a wide variety, including everything from experimental videos to large oil paintings.

Organising an event of this nature is no ordinary feat and Noorjehan Bilrgrami shared the idea behind the show. The inaugural show at the Koel art gallery was White On White and the participating artists were instructed to work with a single colour. A year later, Koel held theBlack On Black group show and for the second anniversary of the gallery Noorjehan organised a Metal On Metalshow. However, Noorjehan soon realised that these themes were becoming gimmicky and even wondered if Koel should do a special show for its third anniversary when other galleries in Pakistan had been around for much longer. However, her friends and advisors at Koel insisted that the gallery should mark each passage of year and they then decided to celebrate the third anniversary by inviting all the artists who had previously showcased at Koel to come together for this large group show. 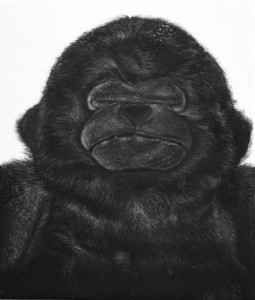 However, writing about a show featuring 85 artists poses its own difficulties and it is impossible to cover every artist, every theme or every style in a single review. There were the larger, more dynamic works such as the painting by Imran Mir ‘Picasso and Me,’ and there were the physically smaller, but no less powerful, works such as the thin strip of photographs by Newsline’s very own Tehmina Ahmed.

Many of the artists brought humour and wit to the show. Maliha Peracha, for instance, created a poster covered with images of medicinal bottles with captions such as ‘The Bitter Brew for the Bitter You’ and ‘Forget Your Troubles, Not Your Spouse.’ Placed right next to the poster was another pop-art creation: A gigantic Rubik’s cube featuring a posterised image of the artist, Arshad Faruqui. Sara Khan’s painting ‘The Knitter’ depicted a woman, dressed in a military uniform and a helmet, busy knitting and Khan pasted an actual spool of red yarn to the painting, which rested on the ground a few feet below the painting itself. Although the work has a playful quality, the red of the yarn is reminiscent of blood and the combination of masculine and feminine imagery is unexpected. 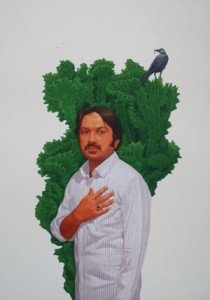 In some cases the humour went into macabre territory and the exhibition had its share of alligator heads with roses for eyes, courtesy Amin Gulgee, and voodoo dolls covered with pins, a creation entitled ‘Bad Prana’ by Saba Khan.

Considering the theme at hand, there were not many self-portraits and one that stood out was Ali Azmat’s painting ‘I.’ Standing before a green, vegetal form, the figure is dressed in a simple button down and stares back at the viewer, and it is hard to tell if he is looking at us placidly or questioningly. And then there was Adeel uz Zaffar’s piece ‘Primate,’ which was a portrait of a stuffed gorilla. There is a sense of humour here, but since the animal is depicted with its eyes shut, the piece also contains a morbid quality and makes one ask: Is the creature dead or is it sleeping? Is it even real? 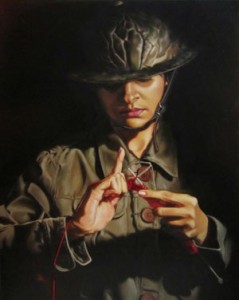 Zaffar, who teaches art at Karachi Grammar School, later brought his students to the show and this was not the only student excursion to the Meinexhibition. Noorjehan revealed that students came in busloads from various schools and colleges, and what is surprising is that even students from NED, an engineering school, came to see the exhibition. While Noorjehan was overwhelmed by the response, it is not hard to see why people in Karachi responed so favourably to the show. While Pakistan is home to a growing art scene, it is still rare to see artists both young and old, established and emerging, come together under one roof.

This article was originally published in the March 2012 issue ofNewsline under the headline “Collective Introspective.”