Who would have known that the musical genre coming straight from the African slums, composed in a one-drop beat, a genre made popular by proverbial reggae legends from the 70s and 80s, like Bob Marley and Peter Tosh, would one day come to represent present-day Pakistan.

Through their music Marley and Tosh spoke of the unjust and exploitative social conditions prevailing in Jamaica, and Max Romeo — another reggae star who worked his way up from irrigation ditches and sugar plantations — sang, critiquing the politicians and generals of his day and age in his hit single ‘One Step Forward, Two Steps Backwards.’ He was blunt and upfront with his assertions, asking pointedly:

“Are you a commercialised

Grabbing at the cash-backs?

This is a time of decision

Tell me what is your plan, yeah.”

Increasingly, a lot of Pakistanis have been at a loss: They wander through the maze of confusion rendered by the local policy matrix, a corrupt and petty political order and bewildering geopolitics, all of which have, over the last several decades, pushed the country to the edges of the clinical condition referred to as schizophrenia.

Note: It may not be entirely out of order to recall that schizophrenia most commonly manifests itself as hallucinations, paranoia, or disorganised speech and thinking, and as Wikipedia explains, “it is accompanied by significant social or occupational dysfunction.”

Certainly, the last few months have thrown up enough examples to support the thesis that government policy and the local, political and social narratives are a mess of contradictions, clawing into the very bone marrow of the body politic and the national psyche, driving the nation to the edge of psychological dysfunction.

Specifics render a clear picture. Let’s remind ourselves of what has happened in the last few weeks on the domestic and external fronts. The Defence of Pakistan Council (DFC), a cabal of ultra-right wingers and some banned terror outfits, staged rallies in various cities of Pakistan doing what they do best: Denouncing “US-India hegemonic designs” and warning the government against letting NATO supplies through.

Then, Cameron Munter, the US ambassador to Islamabad, dropped the bombshell that an air corridor through Pakistan had been available to the US-NATO forces for transportation all along, even while official quarters and televangalists vehemently and repeatedly denied all such claims. Next Prime Minister Gilani himself put official claims to the lie when he stated that the air corridor was never closed to the American-NATO alliance. So much for the anti-US-NATO hyperbole!

Following this, Pakistan and the United States jointly supported a resolution on Syria before the United Nations Security Council prompting China, our all-weather friend, and Russia to veto the same. All this, against the backdrop of the jingoistic official response to the OBL episode, and more recently, the Salala killings, which left 24 Pakistani soldiers dead.

And then, when there was a hue and cry over a predator strike which eliminated key terrorist, Badar Mansoor — whose group owes allegiance to the TTP and Al Qaeda and is held responsible for many attacks on security installations — the state feigned sympathy to such sentiments, even while the security apparatus almost certainly, but secretly, applauded getting rid of Mansoor.

Such is the state of the nation — contradictory policies, practices and assertions, half-truths and outright lies. Who is to argue then that only mass confusion, delusions and paranoia will stem from such a disjointed narrative and from the situation that prompts it.

Newsline interviewed some analysts for their input. “This confusion and contradiction in policies and the public perception of them stem from short-term policy choices and the acute absence of a long-term vision — both of which have become the hallmark of our civil-military policy making elite,” said Dr Hasan Askari Rizvi, a renowned expert on political affairs.

Dr Rizvi agrees with the assertion that the primary source of contradiction is the fact that the audience for policy actions is often not the people of Pakistan — who are fed on a staple diet of anti-American and anti-Indian diatribe — but patron states, in our case the US, with whom the government wants to leverage support to negotiate strategic alliances. 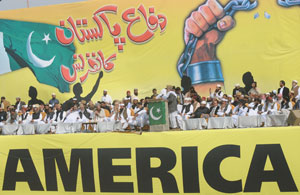 “Take the case of the Defence of Pakistan Council (DPC),” added Dr Rizvi, “which took to the streets stirring up public sentiment after the OBL, and later, the Salala incident. This far-right sentiment probably struck a chord with the military high command’s annoyance with US-NATO. But then economic and strategic compulsions set in, pushing the odd couple to resume cooperation. Now the military is finding it hard to justify the normalisation of relations with the same people it had agreed were virtually Enemy No.1, just a short while ago.”

Dr Rizvi contends that this is the sort of short-sighted policy posturing that has led the policy elite to get into the habit of selling different narratives to their international partners and their voters/citizens. “It is unfortunate that no one knows where the country is headed in the next five years. But certainly, this ignorance is no longer sustainable,” he cautions.

Another military veteran and expert on security matters, Lt General (retd) Talat Masood agrees with Dr. Rizvi’s analysis. “Different power centres, mismanaged priorities and a lack of coherence in the policy matrix are the factors which have landed us in this quagmire. The military has to maintain smooth relations with the US because of a range of compulsions. But that’s not what we’re telling the public. This lack of public buy-in on key policy matters is not workable.” The retired general believes the only solution lies in moving away from the narrative of the security state and into the realm of social security for the people and the country.

Senior psychiatrist Dr Muhammad Amin spoke of what such contradictions in the body politic could induce in the public mind: “If we keep saying one thing and doing another for long periods of time then such a condition could lead to cognitive dissonance.”

Dr Amin further explains that such psychological conditioning causes all sorts of stress disorders in public. “In extreme cases this can lead to various measures of social disintegration.” Asked for a way out of the situation, Dr Amin responded, “For reversing such a condition, it is imperative there is consistency of thought and action, practice and belief.”

The doctor also cautioned against the one-step-forward, two-steps-backward mindset. That’s exactly what Max Romeo, and other leading lights of Reggae wanted their listeners to understand.

This article was originally published in the March issue of Newsline under the headline “Reggae Comes Home.”