By I. A. Rehman | Bookmark | Published 6 years ago 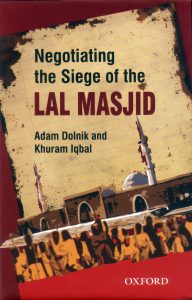 Negotiating the Siege of Lal Masjid is a must read for Pakistan’s policy-makers on internal security, and all those who have to deal with situations when armed groups make demands on the state from behind barricades, often after taking hostages. In many ways, the horribly mishandled Lal Masjid siege serves as a good lesson in how not to deal with a crisis and find more rational and effective ways of dealing with similar challenges in the future.

During the Munich Olympics in 1972, an organisation calling itself Black September abducted some Israeli athletes. Two athletes were killed in the Olympic village and nine of them were killed at the airport when security forces tried to recover them by storming the barricaded terrorists. This and several other similar incidents — involving the Israeli embassy in Thailand (1972), the Budyonnovsk hospital (1995), the Moscow theatre (2002) and the Beslan school (2004) — forced the international law enforcement community to find alternative ways to resolve barricade/hostage situations other than through the use of force which carries the risk of loss of life. By now, the art of resolving barricade/hostage crises through negotiations has been developed to a considerable degree.

The extent to which states have invested in this field is evidenced in the qualifications of the people who have written this book and those who have commented on it. Authors Adam Dolnik and Khurram Iqbal have specialised in counter-terrorism and the former, in particular, is an internationally recognised authority on counter-terrorism, hostage negotiation and kidnap response. The contributors to the blurb include: a former chief of the FBI Crisis Negotiation Unit; the head of the New York City Police Department’s Hostage Negotiation Team; the head of the South African Police Service’s Hostage Negotiation Team; the chief of Hong Kong’s Police Negotiation Cadre; and the head of Norway ’s National Hostage Negotiation Team. Obviously many advanced countries have realised the need for special units in their police and security apparatuses for dealing with barricade/hostage crises. Pakistan has good reason to learn from such initiatives.

The authors’ blow-by-blow account of the Lal Masjid crisis leaves no doubt in the reader’s mind about the Musharraf regime’s contribution to the rise of the Lal Masjid as a centre of extremist militancy. The prayer leader and his brother were helped in many ways by government representatives to the extent that they came to believe that they enjoyed blanket immunity and that the regime would never dare to attack their fortress.

The crisis began early in 2007, when Islamabad’s Capital Development Authority identified 81 mosques that had been erected on illegally occupied land, something Islam strictly forbids, and prepared for their demolition. A mosque on Murree Road, named after Amir Hamza, was actually pulled down. The officially-appointed Lal Masjid controllers assumed leadership of the protest against these demolitions because they had themselves illegally occupied a large tract of land upon which they had built a seminary for girls called Jamia Hafsa.

Subsequently the government caved in on the Amir Hamza mosque issue — in fact the Religious Affairs Minister personally laid the foundation-stone for its reconstruction — encouraging the Lal Masjid group to conceal their self-interest under a wider campaign for the instant enforcement of Shariah law in the country. They were able to secure the support of militant organizations, especially the ones operating in Pakistan’s tribal belt.

They also increased their bargaining chips by seizing a government building which was a children’s library, raiding neighborhood houses ostensibly in an anti-vice drive, setting up a shariah court, and abducting and detaining the staff of a massage parlour that included four Chinese citizens. Later on, they also abducted policemen more than once and held them hostage. After a protracted stand-off, Musharraf ordered the security forces to recapture the mosque. The younger prayer leader (after his elder brother had sought safety outside) preferred death to surrender.

From the outset, the government realised the risk posed by the use of force to flush the militants out of the mosque. It sought the help of ulema, especially of the Wafaqul-Madaris, who told the Lal Masjid commanders to give up their agitation, only to be denounced as government accomplices.

Under its stick-and-carrot policy, the government allowed negotiations with the Lal Masjid command through the head of the ruling party, Chaudhry Shujaat Husain, and at the same time dropped suggestions that it would use force to crush the militants. However, every time it backed out of its move to use force it convinced the Lal Masjid leadership that it could not attack the mosque. Finally, when the Shujaat team had found a peaceful solution, Gen. Musharraf’s arrogance intervened and the mosque was stormed. The rest is history.

The authors argue that the mishandling of the Lal Masjid crisis had a negative impact on the country’s politics. It further polarised society and fuelled militancy. The government alienated the general public by its lack of concern for the young students inside the mosque, and more so, by its callous treatment of those students who had obeyed the call to come out of the mosque.

More importantly, the authors have found the official attempts at negotiations with the Lal Masjid command completely flawed. They have argued that the sequence of threats and counter-threats was an “archaic zero-sum approach,” that “established a pattern of mutual threats and an escalatory rhetoric on both sides that was a sign of bad things to come.” On the basis of the international experience in negotiating an end to barricade/hostage incidents, they have discussed ways to persuade the hostage-takers to avoid killing their captives and forgo their demands. Instead of focusing on the issue of responsibility for the Lal Masjid affair, the authors have sought to “provide a critical valuation of the successes and failures of the negotiation approach, with the aim of deriving lessons that would enhance our ability to manage similar standoffs more effectively.”

The authors are realistic enough to admit “that many of the paradigms and presumptions on which contemporary practice (of negotiations) is based simply do not reflect the reality of incidents perpetrated by ideologically or religiously-driven militants…. Negotiating such sieges offer some additional challenges.” This clearly means that while developing special teams for negotiations to resolve barricade/hostage situations created by militants, who have resolved to embrace martyrdom it will be necessary to go beyond the international community’s experience. A piece of wholesome counsel, indeed.