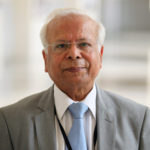 Ishrat Husain is a former dean and director of IBA and a former governor of the State Bank of Pakistan.

The China-Pakistan Economic Corridor (CPEC) has become the subject of an increasing number of conferences, talk shows, op-ed pieces and articles. The interest it has sparked is not limited to Pakistan, but has spilled over the border and into far distant places.

The basic thrust of the debate emanates from two different strands of thought. At the geopolitical level, the One Belt, One Road (OBOR), of which CPEC is an integral part, is seen as a manifestation of China’s ambitions to become a global power to be reckoned with. The existing power structure feels threatened by the rising influence of a newcomer on the scene. New alliances, such as the one between the US, Japan and India, are emerging to contain the ascendancy of China. South Asian arch-rivals, India and Pakistan, are realigning themselves. Pakistan, a long-time ally of the US, is drifting gradually towards China, while India — a traditional friend of the Soviet Union — is strengthening its links with the United States. Consequently, CPEC has been caught in the crossfire between these two rival camps. Some of the criticism and scepticism about CPEC originates purely from the fear of China possibly using Gwadar in the future as a strategic naval base in a critical sea fare lane in the Gulf.

As far as the geo-economics of OBOR are concerned, as many as 60 countries will be connected to China through a network of roads, highways, railways, pipelines, fibre optics and grids. This connectivity, at its peak, would further enhance the competitiveness of Chinese goods and services by reducing the transaction costs and expediting delivery time. China is already flooding the international markets with its relatively cheap goods and has become the top exporting nation of the world. Its comparative advantage would thus be sustained over time. And its position as a magnet for a global supply chain would be reinforced. 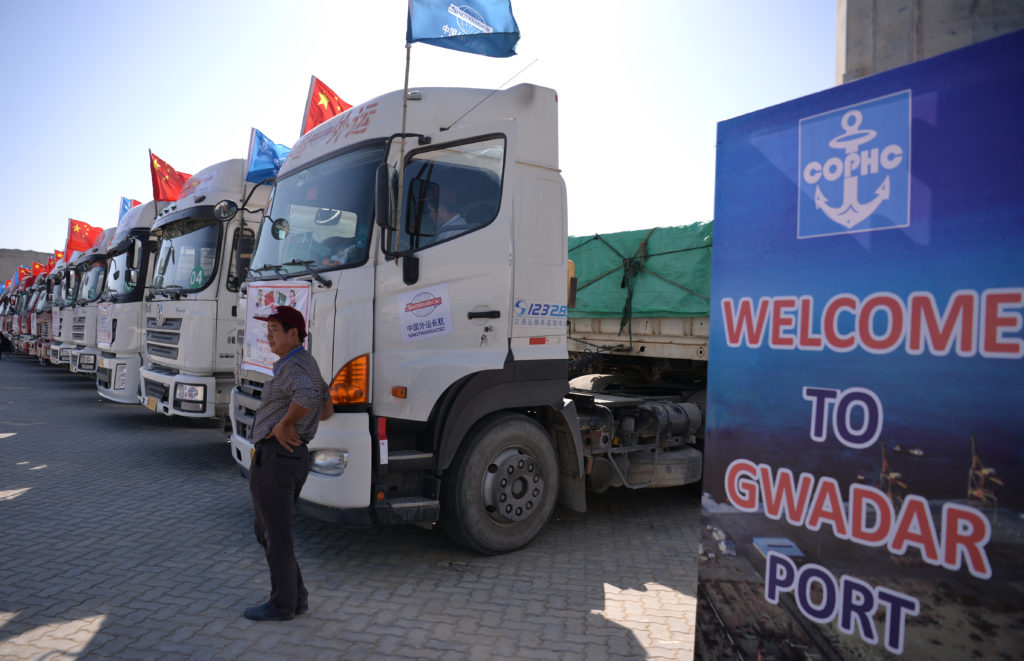 A Chinese worker stands near trucks carrying goods during the opening of a trade project in Gwadar port, some 700 kms west of the Pakistani city of Karachi on November  / AFP /Aamir Qureshi

It is in the above context that the opportunities and risks arising from CPEC should be examined dispassionately, in a holistic manner. The foremost singular contribution that has already made a significant and visible difference is the addition of 10,000MW to the generation capacity in Pakistan, in a span of four years. It has overcome chronic energy shortages, altered the fuel mix, and substituted plants with 61 per cent efficiency factor in place of those operating at 28 per cent, bringing down the cost to consumers. Electricity outages had cost the economy about 1.5 to 2 percentage points of the Gross Domestic Product (GDP). Export orders were cancelled and the buyers walked out of Pakistan as their traditional suppliers could not fulfil the orders on time, due to energy shortages. The value of exports took a dip, precipitating a balance of payments crisis. As new hydel, renewable, coal-based projects come on board, there will be a corresponding shrinking of imports of furnace oil and diesel.

The associated risk of an additional supply of power is that unless we restructure or privatise the distribution companies, or make the power distribution sector competitive, the circular debt would keep on rising. Distribution losses and non-recovery of dues have put enormous pressure on public finances, and the subsidies on this account may escalate if institutional reforms are not undertaken.

The second area that would benefit Pakistan is the construction of highways and the railway line linking Gwadar with Kashgar and the mass transit systems within big cities. The rehabilitation and upgrading of the main railway line with high speed trains, would relieve businesses of the high cost of domestic transportation of goods to and from Karachi (at present, the bulk of the freight is carried by a trucking fleet). The inner city mass transit systems in Lahore, Peshawar, Karachi and Quetta, would provide safe and affordable public transport to the citizens, who face inconvenience and spend a lot of time and money in commuting to work. The reduced travel time and saving in transportation expenses would increase their productivity and also augment the purchasing power of the lower income and the lower middle-income group.

The western route would open up backward districts in Balochistan and southern Khyber-Pakhtunkhwa (KP) and integrate them with the national markets. The communities living along the route would be able to produce and sell the output from their mining, livestock and poultry, horticulture and fisheries, to a much larger segment of consumers. Their transportation costs would become considerably lower, the proportion of perishables and waste would go down, cool chains and warehousing would become available and processing would become possible in the adjoining industrial zones. Access to a large trucking fleet and containers, with greater frequency and reduced turnaround, time may help in the scaling-up of operations. The fibre optic network would allow the citizens of these deprived districts access to the latest 3G and 4G broadband Internet connections.

The risk is that education and health facilities, drinking water and vocational training may not be available to the communities living outside the industrial zones in these districts. This may create resentment that the benefits are not accruing to the people-at-large in these districts. Careful planning should be carried out, as is the case with the Sindh Engro Thar Coal Mining project where the local population benefits in the form of employment, contractual services, rural roads and transport services, agriculture development and vocational and on-the-job training. A special multi-year fund, amounting to Rs 100 billion, should be set up for providing the basic services to the communities living in all districts, — from Gwadar to DI Khan — along the western route. This gesture would go a long way to spread the benefits of CPEC to a much larger segment of the population in these remote, disadvantaged areas of the country. It would also help in promoting social cohesion and allaying fears that the local communities will become marginalised. The detractors, who are propagating that CPEC would only benefit Punjab, would be exposed in their nefarious game of creating polarisation and discontent.

There is a systematic campaign orchestrated by some Pakistanis reverberating in other not-too-friendly countries, that CPEC is designed for the benefit of the Chinese and their eventual economic domination of Pakistan. It is argued that a fragile and highly indebted economy with weak exports, dependent upon foreign assistance and prone to periodic external payments crises, would not be able to meet the additional debt obligations and repatriation of profits created by CPEC. China is entrapping Pakistan by providing expensive loans and credits for projects of dubious economic value. If it is not able to repay, China will take over Gwadar port, land and assets in Pakistan, as they have done in the case of Hambantota port in Sri Lanka. This agreement between China and Sri Lanka has been widely touted as an example of China’s nefarious intentions to colonise poor countries. 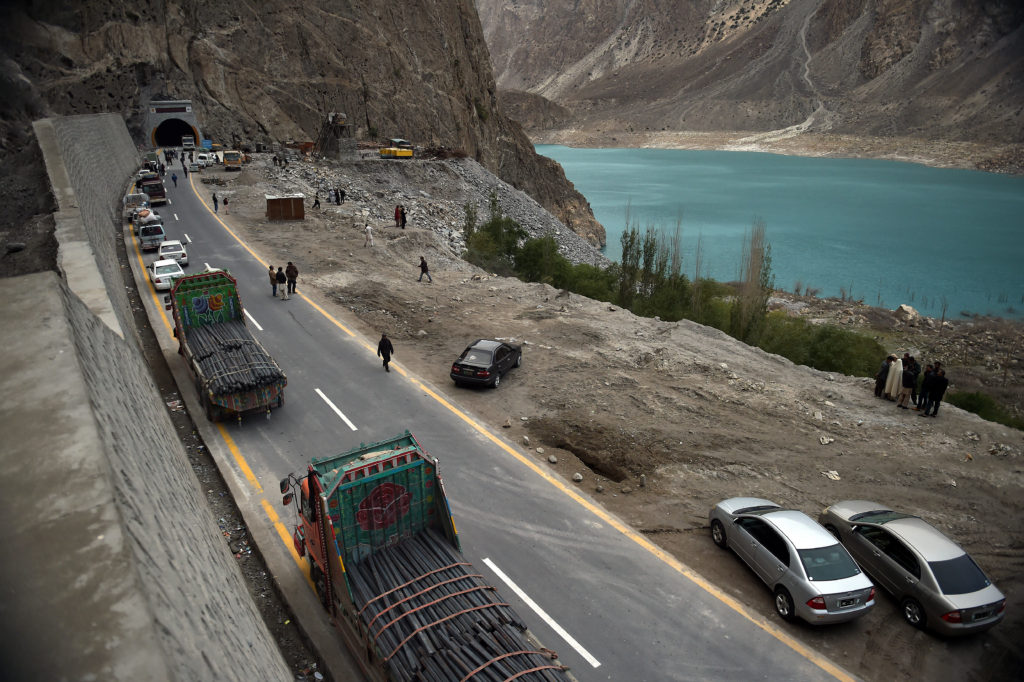 The above-stated apprehensions are totally misplaced and based on conjecture — not on actual facts. Out of a total commitment of $50 billion, 70 per cent — or $35 billion — would be coming to Pakistan in the form of Foreign Direct Investment (FDI). Chinese companies are following the established Independent Power Producers (IPP) policy of the government, which is applicable to all domestic and foreign investors, and under which they are allowed 17 per cent return on equity in US dollar terms. Infrastructure projects would be financed by long-term concessional loans averaging an interest rate of two per cent, and grants. It is estimated that the total annual outflows on both these counts would average between $2.5 to $3 billion annually. How would this amount be repaid? The losses to the national income due to energy shortages amount to $6 billion annually. As these shortages are eased and efficiency gains are realised, the national income would rise by at least $6-7 billion per annum. Resumption of a higher growth rate of six to seven per cent would not only suffice to repay these obligations comfortably, but also provide ample resources for new investment. Exports had stumbled from $25 billion to $21 billion, again because of outages. These are now beginning to grow in double digits. It is estimated that a 14 per cent growth rate of exports would be able to finance the additional foreign exchange burden of all the repayments on account of CPEC. Imports of capital goods would recede with the completion of the energy projects, leading to savings on the import bill. Similarly, as the demand for imported fuel oil and diesel diminishes, despite the LNG imports, there would be easing of pressure on the petroleum, oil and lubricants (POL) import bill. These savings on the import side have not been reflected in the above analysis of repayment capacity. We also have not taken into account the transit fees in these calculations, as we do not know the volume of trade that would pass through the corridor. Moreover, these calculations do not include the second order effects, whereby infrastructure projects make our industries more competitive for import substitutes and new export products. The substantial inflow of Chinese investment is also changing the perception of Pakistan. It is a signal to other countries that Pakistan is an attractive and safe place to invest. To the extent that foreign investment from other countries is also stepped up, Pakistan’s capacity to repay would be further enhanced. The higher growth of economy and exports would enable Pakistan to meet its repayment obligations comfortably.

In order to realise these opportunities and mitigate the risks, the government has to undertake several policy and institutional reforms and streamline its bureaucratic processes. In the absence of such measures, benefits may turn out to be lower than calculated and the risks may be heightened.