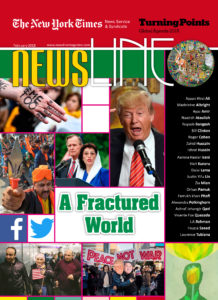 The theme of the Davos Summit this year was, ‘Creating a Shared Future in a Fractured World.’

A tall order indeed, in a First World led by a man called Donald Trump. His election to the post of President of the United States was a turning point not just for the US, but the world at large.

In one fell swoop, he divided the world like never before; indulged in name-calling, bullying and abusing; pulled out of international accords and treaties; threatened countries with dire consequences if they did not do his bidding; accused the media of spreading fake news and, above all, stripped the office of the US President of all dignity and decorum.

The world looked askance, as he closed the doors on immigrants soon after he took over, imposed a travel ban on citizens from several Muslim and African countries, providing sustenance to racist bigots like France’s Marine Le Pen and the ‘Dutch Trump’ Geert Wilders. Fortunately, compassionate leaders like Angela Merkel in Germany and Emmanuel Macron in France won the vote, with the former providing shelter to refugees from war-torn countries. But lurking in the wings, neo-fascist governments, like those in Poland and Hungary, could tip that balance rightwards — in the European Union and the rest of the world.

The American dream is all but over for now. In Trump’s new world disorder, there is no place for the “poor…huddled masses yearning to breathe free… the wretched refuse…” as US aid is cut to the bare bones.

“I am the only one that matters,” Trump told Fox News. “That’s what the policy is going to be… call it Me-ism.” And so Me-ism flourishes. He pulled out of the Paris Climate Accord, even as storms, flash floods and heavy rains wreaked havoc across the world, including the US, and pollution levels touched dangerous highs in cities like Delhi and Lahore.

Any mention of ‘climate change’ is anathema to Trump. As is the word ‘Palestine.’ The dream of a Palestinian homeland receded as Trump announced the shifting of the US Embassy from Tel Aviv to Jerusalem. So did the Iranian dream of peace with the US and removal of sanctions as Trump threatened to pull out of the nuclear deal that Obama had pulled off. As did Pakistan’s desire of a healthy equilibrium in its relations with India as Trump propped up India in the region as a bulwark against China, the newly emerging leader that poses a threat to US interests in the region with CPEC and the One Belt, One Road initiatives.

Meanwhile, the deadly barbs being traded between the twitter-happy Trump and the trigger-happy Kim Jong-un of North Korea are raising fears of a nuclear nightmare. The Bulletin of Atomic Scientists announced that the world is inching its way towards a nuclear holocaust and forwarded the Doomsday clock by 30 seconds to 2 minutes to midnight. It blamed the world leaders for failing to respond effectively to the looming threats of a nuclear war and climate change, making the world’s situation ever more precarious, ever more dangerous than a year ago.

The question is, is the world listening?