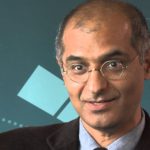 Zia Mian is a physicist and nuclear expert at Princeton University. He is co-director of the Program on Science and Global Security.

The world has inched a little closer to doomsday this past year, according to the Bulletin of the Atomic Scientists, a magazine founded over 70 years ago by the scientists who built the first atom bomb. The announcement on January 25 explained that we now are all in greater danger of catastrophe because of a growing threat of nuclear weapons and a failure to address climate change, saying “The greatest risks last year arose in the nuclear realm.”

There are nuclear flashpoints in at least two different places in the world today. Both places are marked by borders created by a forced partition of place and people. The key antagonists have nuclear weapons and a history of war. Conflict in either place threatens death and suffering on an unimaginable scale. There is a desperate need for international intervention to make sure nuclear weapons are not used.

The first flashpoint is the Korean peninsula, divided between North Korea and South Korea where threats of war are hurled almost daily. The second is India and Pakistan and the Line of Control (LoC) that separates their armies in divided Kashmir, a nuclear border where a low grade war is already ongoing, with soldiers shooting at and killing each other and civilians. 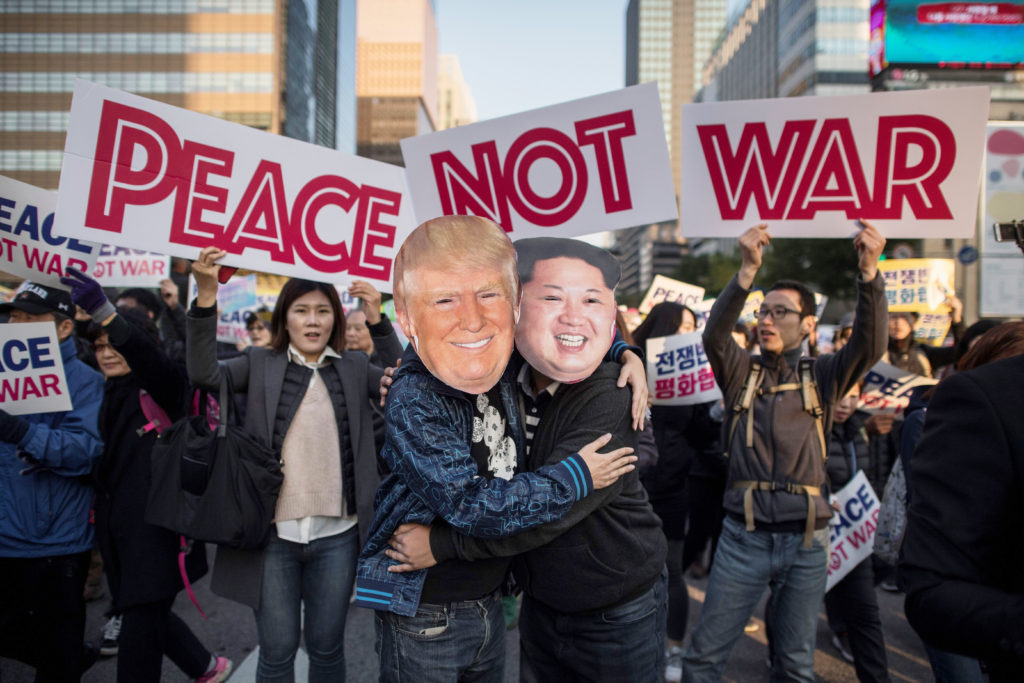 Demonstrators dressed as North Korean leader Kim Jong-Un (R) and US President Donald Trump (L) embrace during a peace rally in Seoul on November 5, 2017.
Thousands of South Koreans called for peace in a protest against an upcoming visit by Donald Trump as he begins a two-week Asia tour amid tension over North Korea’s weapons drive. / AFP PHOTO / Ed JONES

The United States and North Korea have the bloodiest history of contest between any two nuclear-armed countries. As Bruce Cumings observed in his book, North Korea: Another Country, for the people and leaders of North Korea, war proved to be a stern teacher. In the war that raged from 1950 to 1953, backed by the United Nations, the US and its allies fought first to roll back North Korea’s effort to force reunification of the Korean peninsula and then to occupy North Korea. Over three million North Koreans and around one million South Koreans were killed. China, which came to North Korea’s aid, suffered perhaps a million casualties. Over 35,000 American soldiers died in the fighting. The ceasefire line was drawn at the 38th parallel.

The Korean war was fought under the nuclear shadow. US commanders planned and threatened to use nuclear weapons against North Korea and China. Soon afterwards, in violation of the 1953 armistice which ended the fighting, the United States put nuclear weapons in South Korea. These were withdrawn in 1991, but the United States still flies nuclear-capable bombers near Korea as if to prove a point. The United States today has about 4,500 nuclear weapons, with over 1,700 weapons deployed on submarine and land-based missiles and aircraft. It is no surprise, as Cumings explains, “The North Korean population is constantly drilled to prepare for war, indeed for anything — including a nuclear attack.”

Over the past 25 years, North Korea has built its own nuclear weapons. It has perhaps as many as 60 nuclear weapons by some estimates. Its missiles pose a threat to cities and US bases in South Korea and Japan and it is intent on being able to attack American cities. This capability may be achieved in 2018. The recent false alert of an incoming missile that terrified the people of the US island state of Hawaii may be indicative of the shape of things to come. To prevent this, the US is said to be planning a “bloody nose” attack on North Korea. It hopes this assault will be destructive enough to convince North Korea to back off from its nuclear programme. The risk is a series of ever more desperate and destructive attacks that could end in a nuclear war.

As North Korea’s nuclear programme has advanced in President Donald Trump’s first year of office, he has shown that leaders are key in creating nuclear risks. Trump has declared “North Korea best not make any more threats to the United States… They will be met with fire and fury like the world has never seen.” North Korea’s leader Kim Jong-un seems undeterred. “A frightened dog barks louder,” he says about Trump and claims, “I will surely and definitely tame the mentally deranged US dotard with fire.” With leaders like these, ego drives policy decisions. When they run countries armed with nuclear weapons, a nuclear war is not far away. 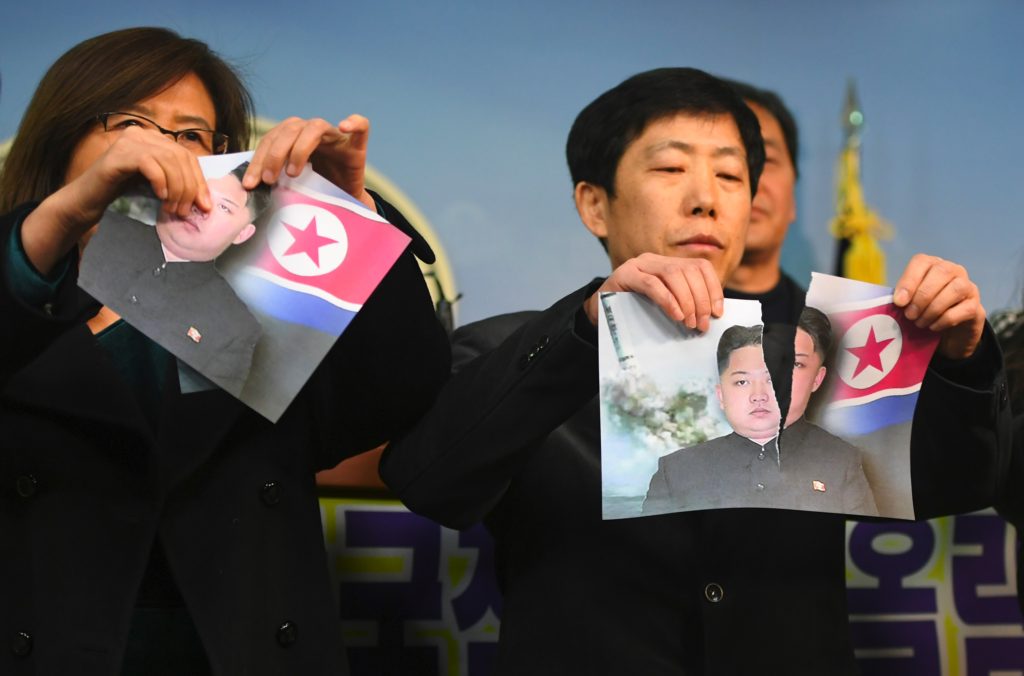 North Koreans who defected to the South tear pictures of North Korean leader Kim Jong-Un during a press conference against the North’s attendance at the Pyeongchang Olympics, at the National Assembly in Seoul on January 24, 2018.
South Korea’s efforts to bring the North to its Winter Olympics in Pyeongchang next month are provoking a backlash among its own people, with accusations that Seoul risks turning the Games into a “Pyongyang Olympics”. / AFP PHOTO / JUNG Yeon-Je

Like North Korea and the United States, Pakistan and India have an old story of conflict and war wrapped up in ideas about national identity and power. The first India-Pakistan war came soon after their independence from the British Empire in 1947. Pakistan claimed the Muslim majority area of Kashmir, but Kashmir’s Hindu ruler opted for India. Thousands died in the fighting, and India in 1948 asked the United Nations to intervene. The eventual ceasefire left Kashmir divided along a LoC and the promise of a plebiscite in Kashmir to decide its future was left hanging.

Pakistan tried again in 1965 to seize Kashmir. Armed with new American weapons and feeling emboldened at having a superpower as an ally, Pakistan sent forces across the LoC in the hope of inciting an uprising by Kashmiris against Indian rule. It proved futile. India retaliated by invading Pakistan. They fought each other to a standstill. In time, Pakistan turned to arming first Kashmiri nationalists, and then Islamists, to fight India indirectly in Kashmir. Kashmiris struggling for democracy and autonomy bore the brunt of the violence from the militants and from Indian repression aimed at maintaining control. Some 70,000 Kashmiris are believed to have been killed in the past 30 years.

It was no surprise that the nuclear weapon tests in May 1998, first by India and then by Pakistan, unleashed a new Kashmir crisis. In May 1999, Pakistani troops and allied militants crossed the LoC and fought a bitter campaign against Indian forces. Eventually Pakistan had to retreat. Then militants, believed to be backed by Pakistan, attacked India’s parliament at the end of 2001. There was justified outrage in India. A million troops were mobilised, war seemed imminent even though both countries now had nuclear weapons. A former chief of the Pakistan army, General Mirza Aslam Beg, declared, “You can die crossing the street, or you could die in a nuclear war. You’ve got to die someday anyway.”

Kashmir may drive the countries to war again. The 2003 ceasefire that brought some calm to the LoC has given way, over the past few years, to frequent and fierce firing by the opposing armies. Locals say, “It appears as if a full-blown war is going on between India and Pakistan.” Meanwhile, a new generation of Kashmiris is protesting what they see as Indian occupation and repression. Pakistan is accused of supporting the militant groups’ attacks on Indian forces. An attack in 2016 that killed 18 soldiers at an Indian army base, led India to launch what it called “surgical strikes” across the LoC to destroy the “launching pads of militants.” The militant attacks did not end.

The 2008 attack in Mumbai was traced back to Pakistan. The next attack in Kashmir or elsewhere in India may drive demands to strike hard against Pakistan. A November 2017 Pew poll found that over 60 per cent of people in India supported greater use of military force to deal with Kashmir.

If war breaks out, both Pakistan and India will be better prepared than they were during their last crisis. They have been building up their arsenals: they are believed to have between 100 and 150 weapons each. 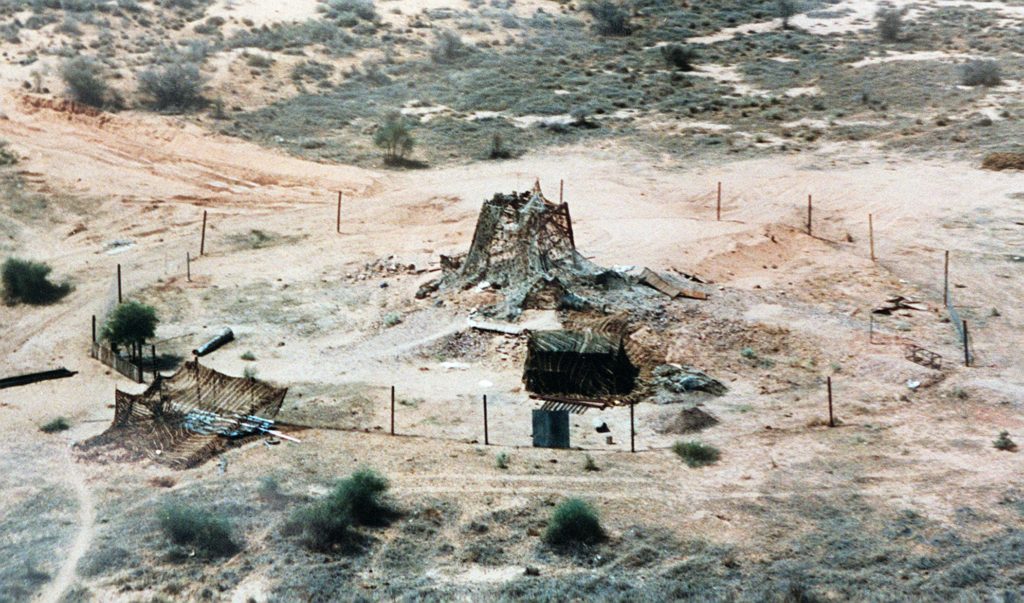 This photograph released by the Indian government 17 May shows the Shakti-3 nuclear site after a nuclear device was detonated underground 11 May. In response to India’s tests, it was announced that Pakistan would conduct nuclear tests of its own in the near future. / AFP PHOTO /HO

Over the past decade, Pakistan has developed short-range nuclear weapons for battlefield use to counter India’s larger conventional forces. General Khalid Kidwai, who managed Pakistan’s nuclear arsenal, says with these new weapons there is no fear of a conventional war with India. While Pakistan rehearses using these weapons, India runs massive military exercises to fight on after a nuclear attack on its forces. Indian Army commander, General Bipin Rawat, said in January 2018, “If we will have to really confront the Pakistanis, and a task is given to us, we are not going to say we cannot cross the border because they have nuclear weapons. We will have to call their nuclear bluff.”

In both the Korean Peninsula and South Asia, the world can do more than hold its breath out of fear of a nuclear war. Governments and publics can send a clear message to the leaders of the United States, North Korea, Pakistan and India, who seem to have no problem threatening the use of nuclear weapons: we will not accept this and will hold you to account.

A prohibition on using nuclear weapons would be a small step back from the nuclear brink and the goal already has broad support and a legal foundation. The new Treaty on the Prohibition of Nuclear Weapons adopted at the United Nations in July 2017 by 112 countries includes the obligation that “never under any circumstances” may states “use or threaten to use nuclear weapons.” The nine nuclear armed states have so far ignored this injunction from the majority of the world’s countries. 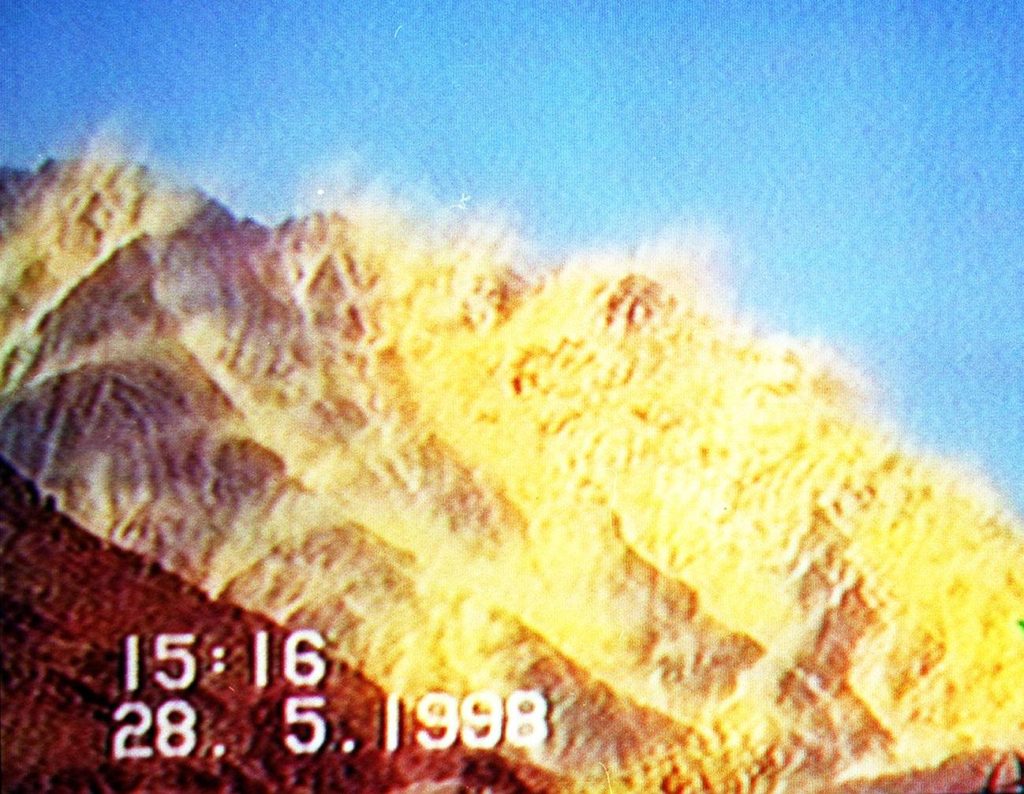 Pakistan Television (PTV) grab picture shows the site of nuclear blasts conducted by Pakistan in Chaghi, in the southwestern province of Baluchistan, 28 May.

A next step could be for action at the United Nations General Assembly, the one place where all states have one vote and none have a veto. It has failed for over 60 years, to undo the partitions that underlie the Korean crisis and the Kashmir dispute, but it need not fail on preventing the use of nuclear weapons.

The General Assembly, for instance, could revisit its famous resolution from November 24, 1961, that declared “any state using nuclear and thermonuclear weapons is to be considered as violating the Charter of the United Nations, as acting contrary to the laws of humanity and as committing a crime against mankind and civilisation.” The General Assembly could recall and uphold this judgement and lay down international law on what the world should do with presidents and prime ministers and their generals who commit nuclear crimes against mankind and civilisation.