Ashraf Jehangir Qazi has served as Pakistan’s ambassador to the US, India and China and as the head of UN missions in Iraq and Sudan.

“The login name for the Modi government is development, but the password is Hindu.” — Karri Sriram.

Hinduism, as it took shape along the Indus, was a regional cultural entity rather than a broader political consciousness. However, as it matured and its centre of gravity shifted from the Indus Valley to the Gangetic plain, it increasingly took on a political exclusiveness. It progressively assumed its modern form along the banks of the Ganges, including its social ideas, laws and the caste system. This process was later accentuated by contact with foreign armies and religions such as those of Islam and later Christianity — even if the first relatively non-political contacts with Christianity and Judaism pre-dated the arrival of Islam. 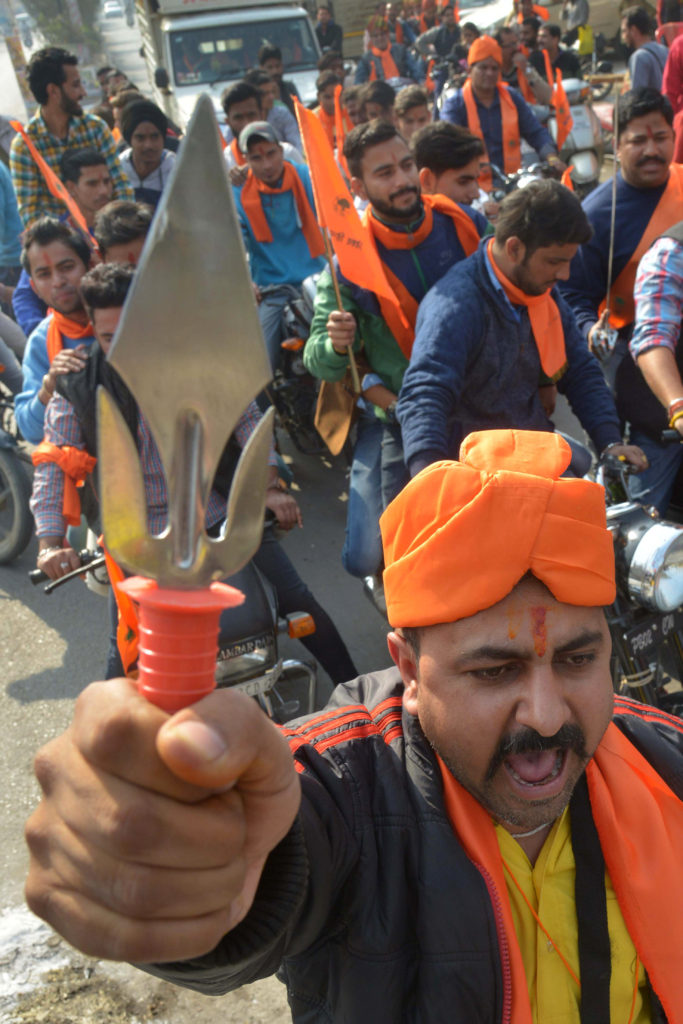 Indian activists of Hindu Bajrang Dal, along with the Vishva Hindu Parishad (VHP), raise religious slogans during a procession marking the 24th anniversary of the demolition of the Babri Masjid Mosque in Ayodhya, in Amritsar on December 6, 2016. / AFP / Narinder Nanu

By the time the first Muslim conquerors arrived, the local inhabitants had begun to refer to themselves collectively as “Hindu.” They soon became conscious of “foreign” or non-Indian religions in India, and those religions that developed in India or “Bharata,” including the Hindu Dharma, Buddhism, Jainism and later Sikhism, etc. Being Hindu changed from just a regional cultural identity to include a religious and political self-consciousness vis-Ã -vis unassimilated foreigners who had settled as rulers and elites among or above them.

Over the centuries, conflicting historical, political and identity narratives began to take shape among the Hindus and Muslims of India as conquests, displacements, uprisings, destruction of temples, conversions, social exclusion, resentment, fear, etc. began to construct and inform the collective consciousness of the rulers and ruled respectively (even if the poorer Muslims who were often converts became rulers only in their own imagination). This mutually exclusive consciousness did not, however, exclude the vast array of social contacts, shared traditions and cultural interactions between them. But it did limit their political salience — and eventually these limits shaped the history of the subcontinent.

The coming of the British colonialists; the progressive displacement and alienation of Muslim elites and religious leaders which impacted on Muslim mass perceptions; the re-discovery of the cultural, literary and philosophical antiquity, diversity and richness of Indian history; the development of a contemporary national consciousness among Hindus and its counterpoint among the Muslims, especially after 1857; the Urdu-Hindi controversy; the prospect of independence after the two world wars and the fears of a vulnerable Muslim minority; the inability of the Muslims to see any real difference between a secular Indian nationalism that did not truly embrace them and an exclusive and militant Hindu religious nationalism articulated by Savarkar, Hedgewar and Golwalkar and embodied in the RSS, and the concept of Hindutva which threatened a Muslim political existence in India; and the atrocities and tragedies that accompanied the massive exchanges of population at the time of Partition set the scene for the reality of an essentially Muslim Pakistan and an essentially Hindu post-Partition India.

Accordingly, contemporary India is very Hindu, even without the embellishments of Modi, and despite the secular assertions of the Congress. Over 80 per cent of India’s population is Hindu and the politics of the Sangh Parivar (the Hindu political family), which was decidedly marginal at Partition, has now become the dominant trend of mainstream politics in India. Moreover, this trend finds its most explicit expression in India’s handling of the situation in Indian-occupied Kashmir, its attitudes towards and treatment of its own Muslims, and its policies towards Pakistan. This is not to deny that a majority of Indians, especially educated Indians, may still prefer to politically, and certainly nationally, identify themselves as Indian rather than Hindu. But this norm appears to be rapidly giving way to an explicitly Hindu identity, mirroring a similar identity development in Pakistan.

There was a time when the BJP under Vajpayee seemed a more credible partner in the search for movement towards normalisation between India and Pakistan. The late Brajesh Mishra, who was Vajpayee’s principal secretary and national security adviser, told me the BJP was a post-Partition entity and accordingly carried none of the guilt of “batwara” (Partition) from which Pakistan emerged. The Congress, however, while professing a liberal secularism, was riddled with the guilt of “batwara.” This made any breakthrough in relations with Pakistan impossible under a Congress-led government. The BJP, on the contrary, was the mirror-image of Pakistan. It did not support Pakistan’s creation. But neither did it see Pakistan as a political albatross round its neck. Accordingly, while vehemently opposing Pakistan’s policies, it could understand Pakistan much better than Congress ever would. This raised the possibility of an eventual mutual understanding and accommodation, if both sides played their respective hands realistically.

Modi, at first, seemed interested in maintaining that expectation, but appears now to have abandoned it altogether. Many Indians would argue that Pakistan itself poured cold water on that hope. Pakistanis, in turn, tend to argue that the history of Modi and the Sangh Parivar — of which the RSS and BJP are part — rendered such hope illusory from the start. 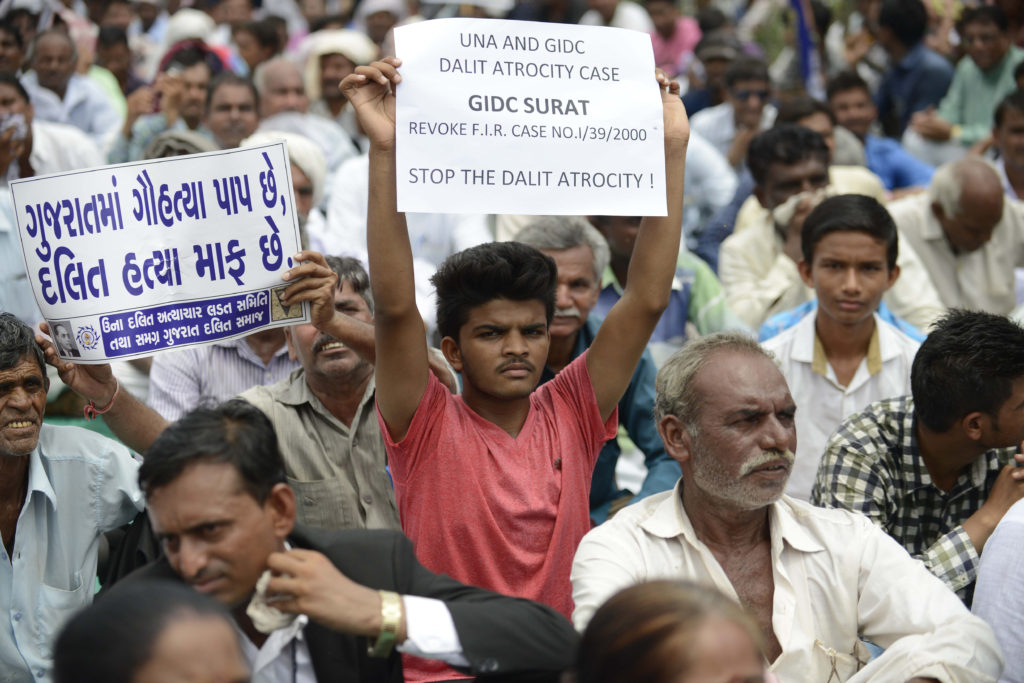 An Indian member of the Dalit caste community holds a placard saying ‘In Gujarat, Cow Slaughter is a Sin while Killing Dalits is pardonable’ (L) as he participates in a protest rally against an attack on Dalit caste members in the Gujarat town of Una, in Ahmedabad./ AFP Photo/Sam

How deep does Hindutva go? Is it a passing phase in the political development of India, or is it an ascendant and now more or less permanent fascist expression that political Hinduism — a relatively modern development — represents? Some argue that Hindutva dovetails seamlessly with India’s great power aspirations, while others argue that ultimately it is incompatible with the rational and humanitarian imperatives of developing a more or less harmonious and scientific political culture without which India will not even begin to compete with China.

Relations with Pakistan may determine the choice India makes. Much of historical Bharata, the land of nascent Hinduism, lies in Pakistan. To reach a settlement with Pakistan over the Kashmir dispute would be tantamount to committing a second “batwara” and betrayal of Bharatmata in the eyes of many Indian nationalists. According to Harvard Professor Diana Eck, the sacred land of Bharata conformed to the political map of pre-1947 British India. Pakistan is its negation. Moreover, Indian perceptions of Pakistan’s policies confirm their pessimism about India-Pakistan relations. During his visit to Lahore in 1999, Vajpayee sought to project a much more hopeful outlook for bilateral relations. Kargil, however, put paid to that hope.

Hindutva today shapes India’s policies towards Pakistan. In response, Pakistan needs to convey to an increasingly influential and technocratic Indian intelligentsia that such an anachronistic approach will not deliver on Indian aspirations. Through building its national capacities, including all aspects of human resource development, imaginative and far-sighted diplomacy, and generally projecting a positive national image to the world, Pakistan may progressively induce India to see its relations with Pakistan in a much less antagonistic context.

It will, of course, take two hands to clap. But seeking to build constituencies of mutual interest and understanding in both countries without compromising on principled policy positions should become a policy priority for Pakistan despite the current Hindutva obstacles. This seems to be beyond the political imagination and courage of its current policy makers. But this is the only way forward given the challenges of the 21st century. This also appears to be the only way to eventually overcome Indian obduracy. It may not work. But that is no reason not to even make the attempt. Pakistan cannot lose from it.

Hinduism is an Aryan religion which is far more malleable than Semitic religions. It has no core dogma. It does not have one God, one book, one prophet, one message, etc. It is considered as more a way of life and a philosophical outlook than an essential and exclusive body of specific beliefs.

Accordingly, Hinduism as a faith system is more difficult to precisely define than the Abrahamic belief systems. It does not entail any exclusive or necessary concept such as Islam entails submission to the will of Allah, or the Christian belief in Christ as Saviour, or the Jewish belief in the Mosaic Law. If Hindus share any common belief it is probably karma and reincarnation, not only as reality, but also as an ethical system of reward and punishment for living a good or a bad life.

The word ‘Hindu’ itself was foreign to the people of India until recent centuries. The ancient Persian or Aryan tribes who settled along the Indus referred to the native people they encountered along or beyond the river (Sindhu) as Sindhi or Hindi. ‘S’ and ‘H’ are interchangeable between Avesta and Sanskrit. The land of seven rivers or Hapta Hindhu in Avesta is the same as Sapta Sindhava in Sanskrit.

Accordingly, Hindu was a foreign name (although those Aryans who used it, in time became the first Hindus.) It referred to the region, Bharata, between the Indus in the West and the legendary Saraswati in the East. It did not refer to a belief system. Even today, Hindus refer to their “religion” or weltanshaaung as “Sanatan Dharma,” which according to Hindol Sengupta is “the harmonious code of balance that keeps everything functioning.” It is the way that ultimately leads to the ethical goal of “Moksha” or release from the cycle of death and rebirth (samsara) and its accompanying pain and vainglory.

Some observers regard the Abrahamic religions as “sky” or “desert” religions because they involve concepts of absoluteness and limitlessness which transcend any earthly phenomena, whereas Hinduism and other “Asian” religions are “earth” religions because their cumulative inspiration derives from the infinite complexity and diversity of mundane nature. Nothing is truly absolute. All is relative. Nevertheless, the concept of God is not absent from Hinduism. It exists in many forms such as Bhagwan, Ishwar, Parmatma, etc. It has many aspects such as Brahma, Vishnu and Shiva, each of which embody the divine cycle of creation, sustenance and destruction or karma and reincarnation, ascending towards Moksha.  — A.J.Q

Ashraf Jehangir Qazi has served as Pakistan’s Ambassador to the US, India and China and as the head of UN missions in Iraq and Sudan.