Let us consider two narratives, one being parroted in Washington, and the other in Islamabad. Is a nuclear-equipped Pakistan really worth $928.3 million in economic assistance, when it is dodgy, non-cooperative, and helping insurgents who are killing American and Afghan soldiers? This question by an American journalist, Daniel de Gracia (originally raised in the April 26, 2012 article ‘Making Waves: A Hawaii Perspective on Washington Politics’) essentially resonates the Washington narrative, reflecting frustration and rage. It also questions why the US should trust Pakistan, which supports those Afghan “insurgents” (read Haqqani Network) who kill Americans and other allied troops in Afghanistan. The United States should seriously review its commitments in South and Central Asia, especially in Pakistan. It makes little sense that the United States should be, in effect, paying tribute to Pakistan even as they build strategic weapons of mass destruction, as enunciated by Daniel de Gracia.

And the narrative in Islamabad reads like this: the partnership with Washington has had a huge human, financial and political cost. The arrogant and self-centred USA does not concern itself with Pakistan’s interests and sentiments. The refusal to tender an apology over the Salala attack (Nov 26), and continuing drone strikes (the latest on April 30) are glaring examples of American insensitivity towards Pakistan. The USA clearly remains oblivious to the new reality that in Pakistan, the parliament and its recommendations have taken centre-stage. And the parliament has categorically demanded an apology as well as a halt to the controversial predator strikes.

The two narratives offer a clear contrast; the one from a super power that wants blind compliance in return for money, i.e. monetising services and human losses. The discourse in a politically unsure and economically battered Islamabad meanwhile, reeks with mistrust of the US wish-list and the way it wants to handle Pakistan.

During special envoy Marc Grossman’s Islamabad visit, the two conflicting narratives practically ruled out any progress. Both stuck to their basic positions: the US delegation reiterated its “suspicions” of the Haqqani Network’s involvement (described on Sept 22 by former army chief Admiral Mullen as the veritable arm of the ISI ) in the April 15 Kabul attacks.

Grossman and his delegates used these multiple strikes as the excuse that led to the “hardening of position” on the apology issue. Pakistan conveyed in unambiguous terms that the demands come from the parliament and practically gave Grossman a shut-up call on this count, saying finger-pointing must stop because “it will take us nowhere.”

That is why the Islamabad round ended without any significant move forward; officials refused to declare it a stalemate or deadlock, but neither did they find any word to denote the discussions even as friendly. Stern meetings, marked by the exchange of the usual rhetoric, underlining a hardening of positions on both sides.

It is an unstable “love-hate, on-off affair” defined by mutual suspicions and driven by anger beneath the surface. But can both sides afford the status quo? Can Pakistan bear the possible geo-political and economic consequences of protracted defiance vis a vis the United States? Will it be able to continuously duck under the Parliamentary Resolution, rather than deploying deft diplomacy.

A dispassionate scrutiny would only draw a big no to almost all questions that are currently irritating the Pak-US relationship. Let us see why. 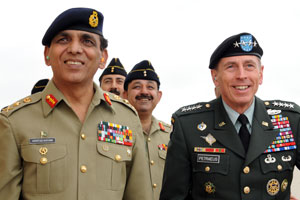 In numerical terms, the United States remains the largest source of bilateral aid to Pakistan. For 2010, the United States budgeted approximately $1.2 billion in economic assistance to Pakistan. The administration’s $1.5 billion funding request for economic assistance to Pakistan for 2011 exceeded the $1.39 billion requested for combating climate change, the $1.3 billion for the Millennium Challenge Corporation, and the $861 million for disaster relief worldwide, and it is about half of the entire global health budget of USAID (taken from What the United States spends in Pakistan, Center for Global Development, USA )

And, according to the State Department’s requested 2013 budget, some $928.3 million has been requested to “focus on programmes to help Pakistan address its energy challenges, increase economic growth, including agriculture, help stabilise border areas, and improve delivery of social services, particularly education and health.

Also, the relatively magnanimous funding stream from the World Bank, the IMF (which lent almost 12 billion dollars between 2008-2010), and the Asian Development Bank became possible also because of the goodwill of the United States, meaning thereby that Washington holds the key to international financial assistance to Pakistan and it can pull the plug whenever it deems fit.

But the power-brokers in Islamabad believe it cannot pull the plug. They think the ground lines of communications (GLOCS) running through Pakistan remain extremely crucial for the American and NATO pullout from Afghanistan, even ahead of the July 2014 deadline. This belief rests on arithmetic, which suggests that the cargo via the Northern Distribution Network (NDN) costs double that of the Pakistani route. But does the cost really matter to the sole superpower and the top seven wealthy nations of the world?

A US Senate Foreign Relations Committee report, quoted by Reuters news agency in December last year had pointed out that the US has since 2009 increasingly been relying on the Northern Distribution Network (NDN) to send non-military supplies to Afghanistan.

“Close to 75 per cent of ground sustainment cargo is now shipped via the NDN,” the reporter said. “One of the NDN routes stretches from the Georgian Black Sea port of Poti, through Baku, Azerbaijan, across the Caspian Sea, and into Central Asia. The other transports goods from the Latvian port of Riga through Russia, Kazakhstan, and Uzbekistan. The third route originates in Latvia and travels through Russia, Kazakhstan, Kyrgyzstan, and passes into Afghanistan via Tajikistan.”

The Reuters report cited figures from the US Transportation Command to underline that only 29% of cargo now goes through Pakistan ( a sharp contrast to over 75 % in 2008/2009). Some 40 per cent of the cargo goes through the NDN, and the rest is shipped by air.

The Foreign Relations Committee however, conceded that the NDN is not an ideal replacement for current supply routes in Pakistan because

b) it only allows for the transit of non-lethal supplies (forcing the transportation of “sensitive and high-technology equipment by air only” ), and

c) the NDN supply route is far more expensive than the southern, i.e. the Pakistan route; a 20-feet container via the NDN costs some $10,000, while a similar container by air would cost about $40,000.

If push came to shove, however, the US-NATO nations would most probably stick to the NDN. Seen in the context of the alliance’s geo-political objectives, a few billion dollars worth of additional cost would hardly matter for the three dozen nations that are currently engaged in Afghanistan.

The cumulative political and economic loss would be Pakistan’s; besides international diplomatic isolation, total suspension of US-NATO cargo via Pakistan means substantial loss of business for almost 7000 trucks that are involved in these supplies. Imagine the number of direct and indirect employment that this business brings ­â€‘ i.e. more than 20,000 families live off this business. If cargo transit through Pakistan came to an entire halt, this would mean a direct hit on the business activity from Karachi to Khyber and Chamman.

“We know this and that is why we are trying to convince the opposition that resumption of GLOCs is in Pakistan’s political and economic interest too,” said an extremely highly placed official. “If we can help the US-NATO forces pull out via Pakistan, this could perhaps also lead to some stabilisation in Afghanistan,” said the official, pointing to the Afghan insurgents and its Pakistani supporters, who claim that foreign troops’ presence in Afghanistan is fueling the current conflict.

Where is the middle ground then? “The middle ground is for both to appreciate the respective limitations and the new realities (in Pakistan) as well as concede that compulsions of American domestic politics keeps spoiling the broth with every new election, as Sherard Cowper-Coles, former British envoy to Kabul, wrote in his memoirs Cables from Kabul.

This article was originally published in the May issue under the headline “A War of Narratives.”