You don’t need to travel to Balochistan to understand how it has been systematically separated from the rest of the country. There is a cell-phone company advertisement at the airport in Karachi showing off the breadth of its network. A thousand points of light illuminate most of the country. However, Balochistan is mostly shrouded in darkness.

It has now become a journalistic clichÃ© for an outsider to breathlessly report on the diversity of a city and Quetta, Balochistan’s capital city, certainly is diverse. But what is truly astounding is how diversely militarised Quetta is. There is the XII Corps of the Pakistan Army stationed there, now headed by Lt Gen Aslam Khattak and moved to the city in 2004, just before the Baloch rebellion began. A base of the Pakistan Air Force is maintained at Samungali and the Frontier Corps headquarters in the province is also maintained in Quetta and headed by Major General Obaidullah Khattak. That the military presence in Balochistan has such a strong Pakhtun component is not coincidental, for reasons that will become apparent. In addition, it is hard to walk any place in Quetta that doesn’t have policemen from the provincial police force patrolling the streets. It’s as if Pakistan’s security establishment is playing the world-domination board game Risk and has decided the best strategy is to move all its pieces to one tiny area.

However, in the minds of locals, because of this overwhelming military presence, Quetta may be one of the most insecure places in the country. By now everyone knows that a separatist rebellion is exploding in the province; less attention is being given to an organised war against minorities in the province’s capital. The most systematic of these campaigns may be the one against its Shia Hazara community.

Speaking out against or reporting on the violence specifically targeting Hazaras comes with its own set of fears. Journalists are reluctant to put their bylines to overly critical pieces and Hazaras personally affected by violence are afraid to speak out, knowing that the malevolent gaze of the spooks is upon them. This is where being an outsider has its advantages. Knowing that after a week in Quetta, one can safely retreat makes it easier to be a conduit for those who actually know what is happening in the city. The stories of the current violence and the history behind them belong to these nameless people.

Statistics on the level of anti-Hazara violence are easily available through the Hazara Democratic Party, a liberal-secular group that is the only organised voice of the Hazara community. In the last two weeks of April alone, 27 Hazaras were killed; in the last decade that number is over 700. Everyone knowledgeable about the situation says the same thing: the main perpetrators of the violence are the supposedly outlawed Lashkar-e-Jhangavi (LeJ). 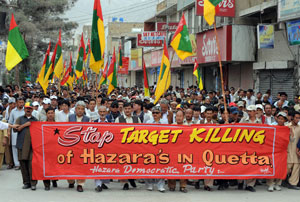 It’s not as if the LeJ hides its complicity in the attacks. Rather it giddily boasts of its achievements, wearing it as a badge of honour. A journalist in Quetta showed me an open letter issued by the group in June of last year. The letter openly declared all Shias “wajib ul qatl.” It said the Hazara sect was impure and called for its extermination, before going on to explain that its definition of extermination is actually akin to something like genocide. “We will make Pakistan their graveyard,” the letter stated matter-of-factly.

The LeJ has been going about that mission with gusto. The militant outfit is blamed by a 23-year-old for the murder of his father at a teashop in Quetta last year. He asks only to be quoted as Changezi, a title commonly adopted by Hazaras since they trace their lineage to Changez (anglicised to Genghis) Khan, the 13th century Mongolian warrior.

Apart from holding the LeJ directly responsible for the murder of his father, and hundreds of other Hazaras, Changezi also sees the complicity of the state in the killings. He points out that Usman Saifullah Kurd, an LeJ leader, was able to escape from a high-security prison in Quetta. “How would this be possible without inside help?” Kurd, along with another LeJ operative Shafiq-ur-Rehman, were convicted for the murder of 53 people in a Shia mosque in Quetta in 2003. In January 2008, Kurd managed to escape.

Changezi holds the military primarily responsible for aiding the LeJ but has harsh words for the cowardice of the politicians as well. He says, “The chief minister [Nawab Aslam Raisani] does not take our problems seriously because our population is so small. He treats us like a joke.” And indeed Raisani has used the Hazara community as the punchline to a joke only he could find funny. In October 2011, after 40 Hazaras were killed in Mastung, he played down the impact of the murders, saying, from the comfort of Islamabad of course, “Of the millions who live in Balochistan, 40 dead in Mastung is not a big deal.” He went on to crack, “I will send a truckload of tissue papers to the bereaved families. I’d send tobacco if I wasn’t a politician.”

The hard reality of realpolitik has left the Hazaras silenced. The total Hazara population is around 300,000 with most of them living in Quetta, with others scattered in Zhob, Khuzdar, Loralai and Dera Murad Jamali. Even in Quetta the Hazaras are ghettoised, with most living in Hazara Town in the western end of the city and Alamadar Road on the eastern end. Knowing this geography is vital to understanding how Hazaras are so easy to target but that doesn’t explain why this particular, largely peaceable community has been declared an insidious enemy in the last couple of decades. For that one has to reach back a century, to the end of the 1800s. 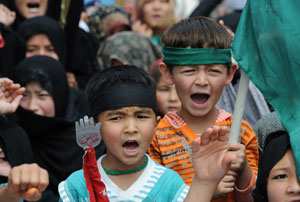 It was in the late 19th century that a trickle of Hazaras began making its way to Balochistan from Afghanistan. Khan Abdur Rahman, the then amir of Afghanistan, began a violent campaign against the Hazaras, leading to the first migration of the community. Having established Balochistan, as well as Turkistan and Khorasan, as the destination of choice for migrating Hazaras, a few hundred more families moved to the province seeking employment opportunities under colonial British rule. Apart from working in the railways, the main career path for Hazaras was to join the Indian Army. In 1904, a separate regiment known as the 106th Hazara Pioneers was created, although it was later disbanded in the 1930s. It was after that that the Hazaras primarily settled in Quetta because of the economic opportunities it offered.

But even in independent Pakistan, the military remained the best route to success for the Hazara community. In fact, the most well-known member of the community is General Mohammed Musa Khan Hazara, who was commander-in-chief of the Pakistan Army during the 1965 war against India and then went on to become governor. Incidentally, the first woman to become a pilot in the air force, Saira Batool, was also a member of the community. Even at a time when the military is looked at with justifiable suspicion, the Hazaras proudly relate stories about the exploits of Flight Lieutenant Samad Ali Changezi, who was posthumously awarded the Sitara-e-Jurrat for carrying out one of the last missions in the 1971 war, and Air Marshal Sharbat Ali Changezi, who even as a junior flying officer in 1955, refused to be presented to the visiting Afghan king, Zahir Shah, because of his persecution of the Hazaras.

The Pakistan state was tardy in recognising the Hazara community, only giving them formal status as citizens of the country as late as 1962. This, not coincidentally, was the year when Afghan President Daud Khan sent troops across the border, against which Hazaras were eager to fight back. A decade later, Daud Khan would make the Pashtunistan issue the cornerstone of steadily-worsening relations with Pakistan. Since he saw the Hazaras as natural allies of Pakistan, this began the next great migration to Quetta, which only hastened with the Soviet invasion of Afghanistan.

Although the Hazara community lived peacefully with the Baloch and Pakhtun populations of Quetta until the LeJ started targeting them in the late 1990s, there were signs of their coming persecution even before that. In 1984, clashes broke out between the Hazaras and the police and FC. Then there were various entanglements with Pashtun groups in the early-1990s. These incidents, said a Hazara teacher, were only sporadic and certainly didn’t denote any pattern of suspicion. But he is worried that there will be a definite split between the Hazaras and Pashtuns, since the FC and the army have a large Pakhtun contingent. This, he feels, is a deliberate policy to further isolate the Hazara community.

In 2009, Hussain Ali Yousafi, a former chairman of the Hazara Democratic Party, was shot dead in Quetta. No one has been charged with his murder as yet, although the LeJ is believed to be responsible. In addition to his political career, Yousafi was a poet, playwright and actor, and wrote in the Hazaravi language. At the offices of Radio Pakistan Quetta, archives of Yousafi’s programme Paiwand Lalai can be found. One of Yousafi’s followers, Jan Muhammad, said that this commitment to the Hazara cause was as sturdy as his luxurious moustache. According to him, 40,000 people showed up at Yousafi’s funeral. But mass mobilisation alone, he said, is not enough. “Yousafi’s sacrifice will have been for nothing if the rest of the country does not wake up to what is being done to us.”

This article was originally published in the May issue under the headline “Planned Extermination.”