Mansoora Hassan’s latest solo show, Parallel Views, is a treatise on movement. Of the 25 untitled works, nearly half feature figures of whirling dervishes superimposed over each other and the other half consists of expressive pulp paper paintings — a technique that uses pigmented fibers to create paint-like marks on the canvas. The two styles, although distinct, share the same meditative quality and when placed side by side in the Canvas Gallery, proved to be quite complimentary to each other.

The whirling dervish paintings are titled the Semaseries and these multimedia works capture the spirituality of the subjects. In some paintings the robes of the dervishes, rendered in warm shades of ochre and burnt sienna, are left smudged and the figures dissolve into each other, creating a larger, somewhat incomprehensible, sense of movement. In others, pencil hatches over the outstretched arms of the dervish emphasise action even where there is stillness. Many of the Sema works are restricted to circular frames, thereby evoking the spinning motions of the dervishes as well as highlighting the shape’s association with divinity.

Nearly all the paintings are done on textured paper and the engravings become more prominent when covered in paint or chalk marks. This layering of imagery adds depth and specifically in the Sema series gives the figures a phantom-like quality as Quranic verses and decorative patterns emerge across their bodies. 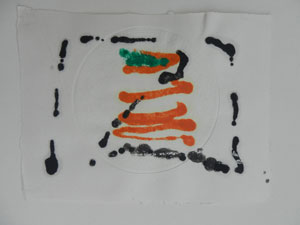 The swirls of colour in the pulp paper paintings can be viewed as abstractions of the whirling dervishes and these images contain a sense of exuberance and energy that is not seen in the more subdued Semaworks. The bold, brightly coloured pigments are unexpected against the delicate patterns of the white paper, but Hassan embraces such contradictions and the very idea of presenting two parallel series of works together emphasises the importance of balance.

Had the sub-collections been viewed in isolation, perhaps the Sema paintings might have seemed overwrought with spirituality and symbolism and the abstract pulp works may have been viewed as, well, too abstract. But by placing them together, Hassan strikes equilibrium and shows how works of art, with all their contrasts and similarities, enhance and feed off each other.

This review was originally published in the May issue under the headline “Moving Strokes.”