The much-feared and warned-against clash of institutions is happening and not many in the power loop are too concerned about it. After Prime Minister Yusuf Raza Gilani’s conviction in the contempt of court case, the country is torn apart along parochial political loyalties. What some may view as a giant leap forward in the effort to build a strong judiciary, the lynchpin of any modern legal order, has pitted the opposition against the government, and the government against the judiciary in an unprecedented show of disorder.

The Supreme Court is now, at once, a platinum hero and vile villain. A protector of the fundamental canons of justice and a gross violator of the people’s mandate. Part of the reason the prime minister’s conviction has triggered off such a divisive reaction is because of the nature of politics. The government is under the immense pressure of its own misgovernance. Four years in power have produced little relief and too much by way of sweat and blood for the people. From Khyber to Karachi, signs of despair and dismay are unmistakable. Incumbency is now an albatross. For a party that wants to win another term, there has to be a cause that breathes life into its shrivelled ranks and distracts the peoples’ mind from the alarming situation the country is in.

Even before the conviction, the People’s Party had been playing the martyr. Sometimes by pointing a finger at the generals, at other times at the media or the judges. The government had been aiming to prove that they were under siege and part of the reason they could not deliver was that there were conspiracies being hatched against them all the time.

Now the prime minister’s conviction fits this framework like the proverbial glove and helps justify incompetence at the helm. In fact, this has provided the PPP the opportunity to dig deep into the graveyard of court decisions that were manifestly biased against them, the most prominent of which was the hanging of the founder of the party Zulfikar Ali Bhutto, the first elected prime minister of Pakistan. It has conjured up all the imagery of “leaders at the cross” to whip up sympathy.

But there is no martyr without a tormentor, and that is what the party has now got in the shape of the present-day judges whose verdicts are being projected as the final chapter in the book of conspiracy against the PPP. The unsuspecting party workers have bought this line, and, in what are officially endorsed country-wide campaigns, they are coming out to protest, genuinely believing that their leaders have been wronged.

The Opposition, the Pakistan Muslim League-N and the still to be electorally endorsed Pakistan-Tehreek-e-Insaf have sensed an opportunity to increase their public ratings and play on the deep frustrations built over the years against this government. In an election year, such moments are rare when sophisticated constitutional issues and public grievances are rolled into a cause for agitational politics. The government’s frontal assault against the judiciary has created just that kind of climate in the country where the Opposition can hope to cash in for greater political gains. This is a head-on clash that would be hard to avert unless the government climbs down from its pole of mourning and reconciles to the fact that the conviction of the prime minister is for real and cannot be altered by legal and procedural sophistry.

One such argument from the government lawyers relates to the disconnect between the charge-sheet against the prime minister and the punishment that was meted out to him. The prime minister, say his lawyers, was accused of wilfully flouting the court’s directive and not for “ridiculing the Court.” The punishment for the first does not raise the issue of his disqualification, but for the second charge it does. Others disagree. They say that wilful flouting of the order of the Court substantially ridicules the court and brings it into disrepute. To say otherwise is to admit shooting someone in the head but claiming that the injury caused is not the responsibility of the one who fired the bullets. 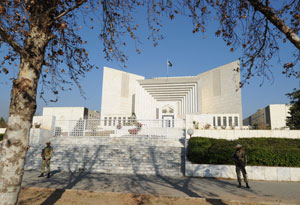 At heart however, the issue is not about the nature of the conviction of the prime minister in the contempt case. It is about ensuring that the prime minister continues to be the shield behind which President Asif Ali Zardari’s stays safe from the probing assault of the judiciary. Long before the prime minister walked into the court to hear the unprecedented-in-Pakistan’s history verdict against him, it was clear that regardless of what the judges did to establish a fairness of trial procedure, the prime minister would only defy them. He would not write to the Swiss authorities asking them to re-open the cases of ill-gotten wealth worth USD 60 million that allegedly belong to President Zardari who obtained it through kickbacks in the ’90s. Premier Yusuf Raza Gilani and his loquacious lawyer, the formidable Aitzaz Ahsan, had only one order to follow: say no to writing the letter, and protect the president. With that target carved in stone, the defence could only delay and defy and after having lost the case in the court, press the street into service to achieve the same end — of ensuring that no questions get asked about whose wealth there was in offshore accounts.

But it is not as if Prime Minister Yusuf Raza Gilani has no personal interest in unleashing the dragon against the courts. His family is in hot soup, as cases involving corruption worth billions of rupees are taking shape against his son, Musa Gilani and some of those who sat in the prime minister’s house and swindled the country’s businessmen through fake proposals. Just three days before his conviction, the prime minister told me in an exclusive meeting that the establishment was after his family because they want “him to go against the president.” He was unambiguous in saying that he would not write the letter against his own president. The judiciary, for its part, could not concern itself with the political compulsions of an accused. Letting the prime minister off the hook of the contempt charge would have meant obliterating judicial power to seek enforcement of its verdicts. From being the legal recourse of the highest resort, it would have become a clerical dispensation, merely pushing papers, unconcerned with the results of its directives.

This is a fairly accurate pointer to which way things are headed. The triangle of confrontation would involve the judiciary, the Opposition and the government, including its allies. It is also a fair framework to forecast that rough political weather would undermine whatever little chances there were of governance improving and service delivery registering progress. The Peoples Party had the choice of lowering political conflict and addressing pressing issues of public interest in its fifth year of power. That option seems to have been pushed to the backburner, and a more pugnacious, rebellious posture is now the preferred choice. As the government acts as an aggrieved party and locks horns with the judges, more mayhem and chaos might spread. There are more cases to be adjudicated and more dirt will inevitably fly. Politics versus politics versus the law: this is the new battle-line in an already embattled country.

This article was originally published in the May issue of Newsline under the headline “Politics Versus the Law.”