A young Natalie (Rebel Wilson) sits glued to the TV, watching Pretty Woman, when her…

On March 12, Rozan, an Islamabad-based NGO, in collaboration with the Sindh Commission on the…

When they were children, Kanwal Ahmed and her older sister enjoyed keeping diaries, the kind…

Spicing it up in Bannu

A satirical horror-comedy, Velvet Buzzsaw is a Netflix original that tells a story of the commodification…

A young Natalie (Rebel Wilson) sits glued to the TV, watching Pretty Woman, when her wine-drinking…

Your party has a long record of participating in rigged elections (1987 and 1996), and…

We know your fingers were badly burnt on account of your tie-up with the BJP.…

At night, they would come in stealth, to bury the bodies of their women. The…

A Rani Among Us

A short film on transgenders that dares to be different. Life, in general, is challenging…

Stanley’s passing on February 19, has been a great personal loss for me as a…

Celebrating Voices of Dissent No stranger to the country, Dr Anita Weiss, a professor of…

Three months ago, Kashmir witnessed the panchayat and local bodies elections that came to be…

In 2018 it was one poster saying “khud khana garam karlo.” This year the number…

Priyanka Gandhi Vadra’s initiation into the hubbub of Indian politics, three months before the country…

Not Me, Not Yet

“He took off my clothes in front of his employees. The employees held me as…

During the early hours of February 26, the Director-General, Inter-Services Public Relation (ISPR), Major General Asif Ghafoor tweeted that Indian Air Force (IAF) jets had violated Pakistani airspace. He said a timely reaction by the Pakistan Air Force (PAF) forced the IAF jets to scramble back after dropping payloads in a forest near Balakot, along the Khyber Pakhtunkhwa (KP)-Azad Jammu and Kashmir (AJK) border.

PAF officials confirm that the IAF used 12 jets for the operation – six Mirages and six SU-30s – with the former dropping bombs that had a range (upper limit) of 50 to 60 kilometres, while the latter escorted them.

The Indian government and the media claimed that the IAF had targeted the training camp of terror outfit Jaish-e-Mohammad (JeM). The figure of casualities provided by the Indian media was around 300 – the number kept fluctuating between 250 and 350 on various Indian channels and media outlets. The exact number, however, was neither confirmed by the Indian government nor the IAF.

Satellite images of the alleged JeM camp, taken by neutral observers and the international media, showed that no infrastructural damage had been done in the area, with locals telling multiple media outlets that there had been no casualties as a result of the IAF raid.

On February 27, Major General Ghafoor said that the IAF jets once again tried to enter Pakistani airspace but PAF jets forestalled the manoeuvre. One Indian MiG-21 was shot down and its pilot, Wing Commander Abhinandan Varathman, was arrested and later released as a goodwill gesture.

Both, the PAF and IAF, claimed victory in the aerial dogfight. Pakistan, however, provided the wreckage of the downed MiG-21 in AJK and the captured Indian pilot as evidence of its triumph. While India claimed to have shot down a Pakistan F-16, it couldn’t provide any tangible proof to support its claim.

A remnant of an Advanced Medium Range Air-to-Air Missile (AMRAAM) was highlighted by the Indian media. The Indian Air Vice Marshal, RGK Kapoor, claimed in a press conference that the missile could only be launched by an F-16 and that no other Pakistani jet has the capability for it.

The official narrative provided to the Pakistani public by Major General Ghafoor, however, categorically stated that Pakistan had not used an F-16 in the operation, and that the strikes had been carried out by JF-17s.

The dogfight between the two nuclear-armed states instigated a debate over their respective military capabilities. Experts noted that the PAF outdid the IAF during the dogfight owing to its relatively modern aircraft.

In a report, The New York Times termed the Indian Air Force “vintage,” citing its heavy reliance on Soviet-era MiG-21s, which were inducted in the IAF in the 1960s. The MiGs are the backbone of the IAF, but owing to an increasing frequency of crashes, these jets are also labelled “flying coffins.” According to Indian media reports, 38 MiGs of the IAF have crashed between 2010 and 2018 alone. And since 1970, more than 170 Indian pilots and 40 civilians have died in these crashes. 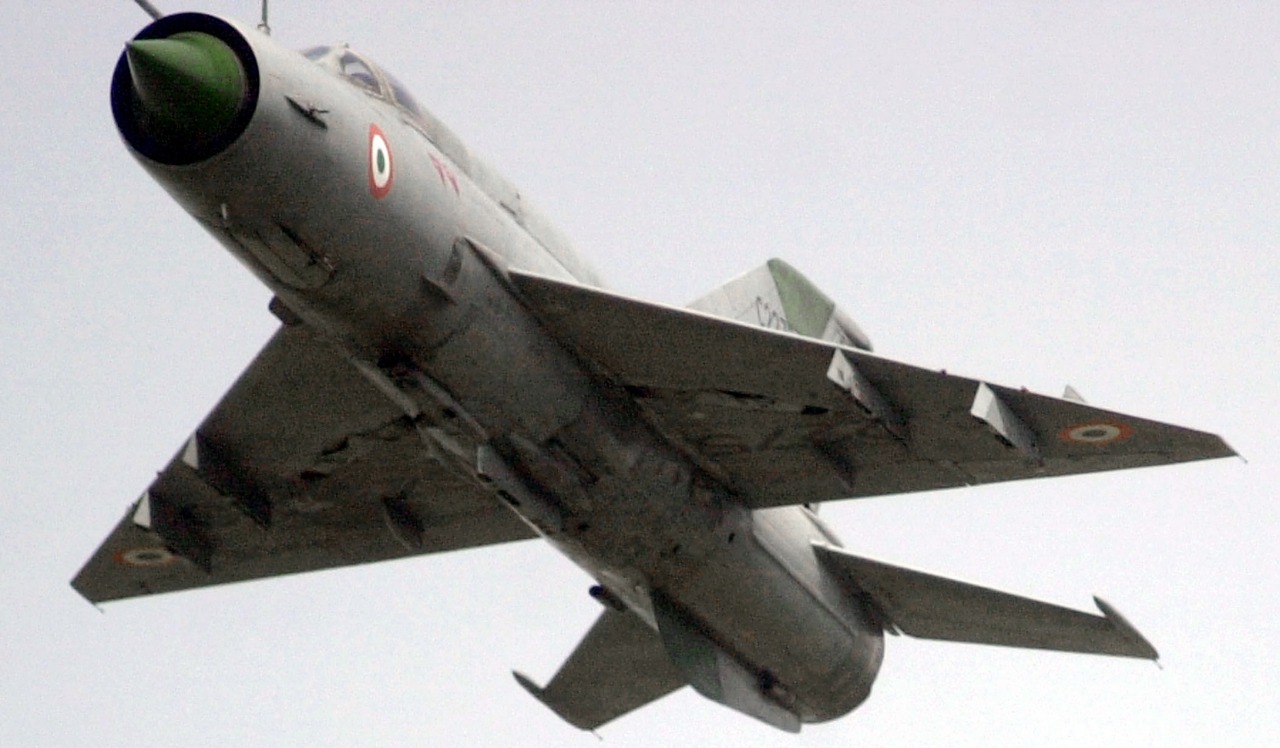 The Indian Air Force’s outdated MiG-21 fighter jets have been labelled “flying coffins” owing to the frequency of crashes.

While the MiG-21 Fishbed had been upgraded to MiG-21 Bison in the 1980s, equipped with better communication systems, avionics and multi-mode radar, an India media report revealed that the IAF had lost half of its MiG combat fleet of 872 by 2012. Along with the issue of old fighter jets, the IAF faces a dearth of personnel and squadrons. In 2012, India had 34 squadrons across the country, which is further expected to dip to 31 in the coming years.

On March 2, Indian PM Narendra Modi said that the result of the dogfight with Pakistan would have been different if India had the Dassault Rafale fighter jets. The statement was also interpreted as Modi’s admission that PAF had got the better of IAF.

Another reason cited for the PAF’s dominance in the air battle is its indigenous military industry. Despite the mammoth size of India’s military, it lacks domestically made arms and weapons, whereas Pakistan – owing in large part to China – has an extensive military industry. The JF-17 Thunder is being seen as the latest triumph of Pak-China military cooperation.

Over the past decade or so, India has become one of the top weapon importers. In 2018, India spent $62 billion on its defense, being outspent only by America, China, Russia and Saudi Arabia.

Pakistan, despite its smaller size, not only has domestically-produced jets, but has also incorporated these in the PAF. In 2010, the PAF inducted its first JF-17 Thunder. In 2015, the PAF produced 16 JF-17s and as of 2016, it is believed to have a capability to produce 25 jets per year.

Observers have noted the disparity between the indigenous industries of the two South Asian neighbours and consider it a vital differentiating factor between the two.

Air Commodore Kaiser Tufail, a former F-16 fighter pilot in the PAF and the author of Great Air Battles of the Pakistan Air Force, says that Pakistan is much more battle-ready than India. “We have been ready for such an operation for over 20 years,” he says. “When I was in the PAF, we especially prepared for skirmishes along the LoC, centering around Kashmir. We have been rehearsing our potential responses and sharpening them in consultation with the army for years,” he adds.

“So we knew exactly what to do in response to the so-called surgical strikes from India,” continues Tufail. “For us, it was as simple as pulling out war plans from the drawers and handing them out to the concerned pilots. Our contingency planning was at the cutting edge.”

The air commodore believes that the IAF also made poor tactical decisions during the dogfight. “In the presence of the Mirage 2000 and Su-30, putting up a MiG-21 was a bad decision,” he says. “The MiG-21 first flew in 1956 and even though this one was its ‘latest’ model, it came out around 1969 – and hence is still extremely old. Notwithstanding the fact that its radar and missiles had been modified, why did they have to put this vintage aircraft up? It was shot down with far superior weapons,” he maintains.

Tufail reveals how Pakistan actually uses its smaller fleet to its advantage. “The PAF has only four types of fighters – the F-16, the JF-17, the Mirage and the F-7 – while the IAF has more. Similarly, in transport, we only have the C-130s and a few CASA-235s, while they have six different types. Maintenance and logistics support of such a varied fleet is a nightmare, especially when all of these are in huge numbers,” he shares.

“Our serviceability is over 90 per cent, as compared to the global benchmark of around 75 per cent,” continues Tufail. “The IAF’s has been varying between 55-60 per cent, which is very poor. Given that India has around 850-900 combat aircraft, and Pakistan has around 400, the respective serviceability rates of the two means that the number of aircraft available to both at any given time is almost the same.”

Security analyst and former secretary at the Ministry of Defence Production, Lieutenant General Talat Masood, agrees that Pakistan has the edge in morale, training and preparedness level, but underlined the need to address the shortcomings as well. “I think we were better prepared [for the dogfight] because we’ve been fighting against terrorism for many years now. We have been in a constant state of war,” he says. 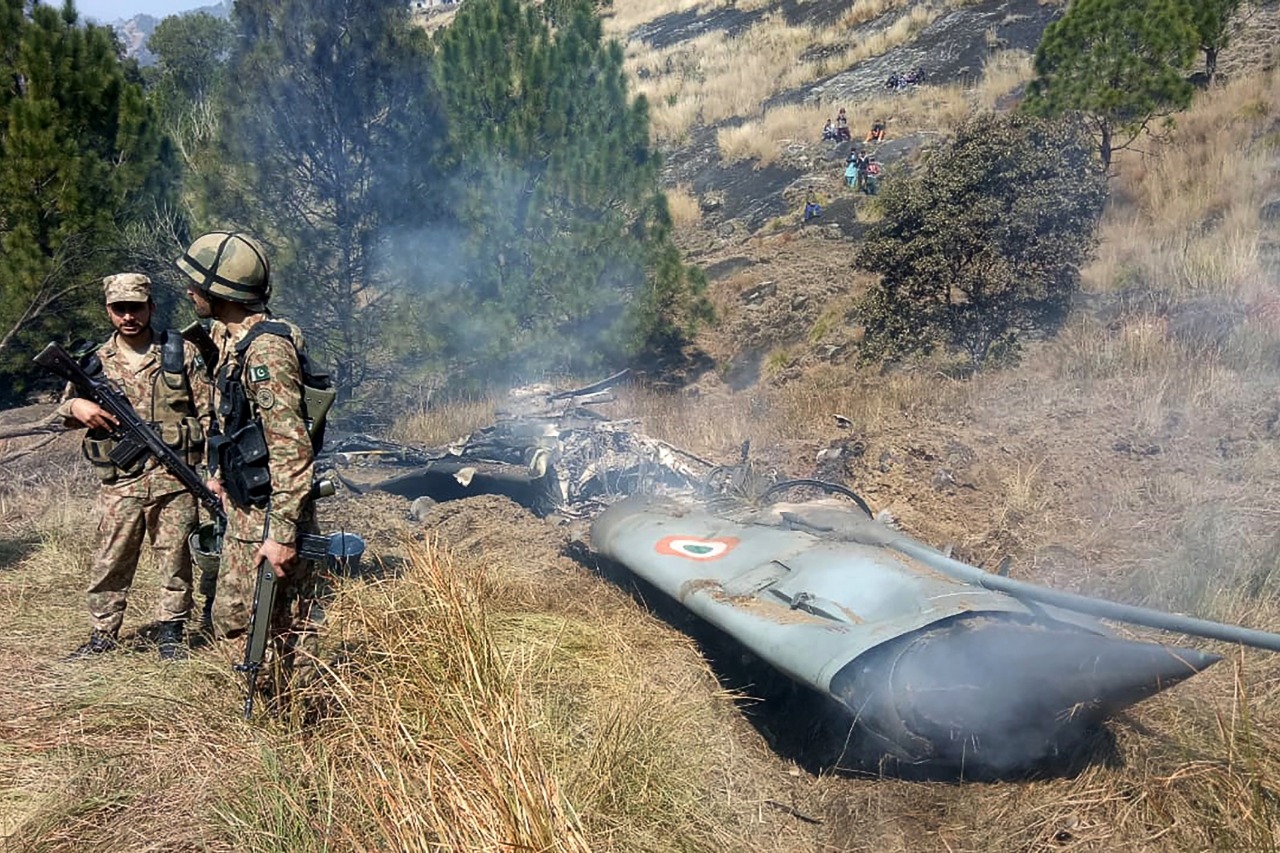 Pakistani soldiers stand next to an Indian fighter jet shot down by the PAF in Pakistan-controlled Kashmir’s Bhimber district.

“But we have our weaknesses as well, which we can’t overlook,” he adds. “First of all we don’t have sufficient logistic support. We don’t have enough fuel and storage capacity. We have done well at the tactical level, but there is a lot more that we need to work on.”

Lieutenant General Talat Masood says Pakistan has a long way to go to be able to challenge India in the long run. “We need to understand that India has a much larger fleet, much larger army, much larger budget and much more international air support. We would not have been able to outdo them in a longer war, it was only in a short-term engagement that we [managed to beat them],” he says.

“We need to develop our capacity for prolonged warfare,” he continues. “The most important factor is that our economy is in the doldrums. The PAF vigilance came at the cost of a lot of money. The IAF can make us bankrupt by just keeping our air force occasionally engaged.”