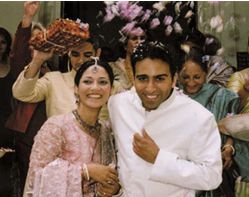 Her face is familiar to viewers all over the world but Mishal Husain, 30, is surprisingly low-key for such a well-known television presenter. She exudes none of the tension and aggression that so many well-known journalists tend to.

One of youngest presenters on BBC’s international satellite channel, BBC World, Mishal became even more high-profile over the past year as she was the channel’s Washington correspondent during the invasion of Iraq. Interestingly, her first foray into journalism was at age 18, working for The News, Islamabad.

“It was rather daunting,” she recalls. “Quite a male environment… I was working on the city pages, mostly reporting on Islamabad events, and I remember the logistics of how to get around and transport and so on were a little confusing.” Mishal had her first byline in the paper — something she describes as quite “thrilling”. Her stint in Islamabad lasted three months, and preceded a six-month sojourn in Moscow teaching English.

Although Mishal’s home is now London, most of her extended family lives in Pakistan, and she and her brother grew up in Abu Dhabi where her doctor father moved for professional reasons. “I was born in England and we moved to the Emirates when I was two,” says Mishal. She considers herself lucky to have spent those years in the Middle East. “It made my links with Pakistan stronger, because of the geographical factor,” she says. Apart from the fact that it was so close to family in Pakistan, she recalls that Abu Dhabi was also a wonderful place to grow up in because “in those days it was a more international, less materialistic place.”

From the age of 12 to 18, she attended a girls’ boarding school, Cobham Hall, in Kent. Although she is evasive about whether she was a shining star at school, one senses she must surely have been. After doing her A levels ( in English, Russian and Chemistry), and stints in Islamabad and Moscow, she went on to Cambridge to study law.

Why law? “Well, I wanted a broad-based degree, and there were bits of the law I really enjoyed. And now I find it really useful in my work, when I’m talking about things like conflict-resolution or human rights law or international law and the use of force.”

Cambridge was followed by a masters degree in human rights law from the European University Institute in Florence, Italy, that focussed “mostly on Bosnian refugees.”

While she was still at university, Mishal did several stints at the BBC as work experience, but her first full-time television job was as a producer for Bloomberg TV. Bloomberg gave her the opportunity to produce as well as present, so that when she moved to BBC World as a producer two years later, she was able to take up a variety of roles.

At BBC World, she worked in the newsroom and the news channel News 24, but then moved to the economy and business unit. It was here that she first had the opportunity to present live. She started out by producing business segments but in just a few months was told that “there was a gap in the presenters’ rota and would she be interested.” 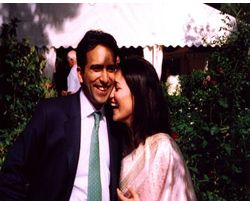 She decided to give it a shot and describes that first time as “very, very frightening. After I had finished I got up from behind the desk and literally fell over because my knees just gave way!” Although she had presented segments at Bloomberg, it had never been live TV, so she still remembers the feeling of that first broadcast. So does she still get nervous before going on air? She laughs and says she’s used to it — “Now it’s as natural as breathing.”

Extremely well-spoken and poised, Mishal, with her polished, gazelle-like demeanour, looks as if she’s walked out of the pages of Vogue. On television, her personality does not overwhelm or dominate the proceedings; she tends to observe, engage and elicit information rather than intimidate her interviewee. When we meet up, this time with her in the interviewee’s role, she is equally unassuming. She looks a little different than on TV because she is wearing glasses.

Does she get recognised a lot? “In London no, but in Washington, people would come up and say oh, we see you on the BBC.” Mishal went to Washington in September 2002 and was the main news anchor there through the buildup to the invasion of Iraq and during the war.

“I was on air when the war began,” she recalls, “and the whole thing had a really unreal feel to it because this was a story we had already been covering for so long; we had even discussed post-war Iraq before the war began. It was almost as if we’d got ahead of the conflict itself. But then when it happened, we crossed the line, moved into a different phase.”

She says her one year in the States gave her a “heightened awareness of my identity”, especially because of the way she was perceived in the light of her Muslim name and Pakistani connections. One of the most common questions directed at Mishal was a reaction to her name — “Are you related to Saddam?” — and she says it was always posed as a serious question with no intended irony at all.

She describes the post 9/11 US she saw as a frightened nation which interpreted everything in terms of fear or perceived threat. Says she: “I’ve lived in the UK through all the years of the IRA terror. One somehow got used to it, but for the Americans something like this was all very new.”

She was also surprised by the US media: “Remarks that would be considered incitement in the UK are considered freedom of expression there.” That right-wing Christian channels could present skewed information in the guise of news coverage was another unexpected discovery. “In many ways I found the press in Pakistan to be much freer than the American press, much more critical and outspoken,” she maintains.

In July 2003, Mishal tied the knot with Meekal Hashmi, 33, a solicitor with Bearings Asset Management in London. How did they meet? “Well, our families had always known each other as our mothers were at Kinnaird together. But Meekal’s parents live in London and he grew up here. People always think it was arranged but it wasn’t, but it’s very fortunate because one does realise how very important family is.”

Mishal’s numerous relatives in Pakistan also include journalists Ahmed Rashid and Kaleem Omar, who happen to be her mother’s cousins. She says that after the success of the former’s book on the Taliban and his subsequent high profile, she’d tease him saying, “But I wanted to be the media star of the family!”

Mishal is anchoring news on BBC World four nights a week, but still actively seeks out projects “I can get my teeth into.” She recently hosted a Hard Talk interview and also hosted a debate on the digital divide and the question of access to information, out of Geneva. Plus, she is very involved with a scholarship scheme named in memory of the slain Washington Post reporter Daniel Pearl, which funds a Pakistani journalist for two years’ study and professional development in Canada. The scheme is obviously close to her heart, one that she describes as a wonderful opportunity for somebody in the Pakistani media.