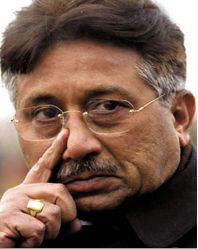 Constitutional amendments should be easy to deal with. The document prescribes the method by which changes can be effected. If there is an issue which commands the consensus of a two-thirds majority in both houses of Parliament, the constitution is amended. This, however, is the theory, and like most theories, this too remained far removed from reality.

General Pervez Musharraf’s political advisors are patting themselves on the back for having piloted the 17th amendment through the treacherous terrain of a hostile Parliament and for closing a sordid chapter that wasted one full year of the new Parliament and a hamstrung government.

The Legal Framework Order is now part of the constitution, thanks to the out-of-Parliament pact between the government of Mir Zafrullah Khan Jamali, and the leadership of the Muttahida Majlis-e-Amal (MMA) — a six-party alliance of religious parties. This pact, whose every page was signed by the leaders of both sides, passed the 17th amendment with 248 votes out of the National Assembly’s 342, and 72 out of the Senate’s 100.

“We have chosen the middle way for settling the issue. In ideal circumstances the situation would have been different, but we are transiting from military rule to a democratic dispensation and the 17th amendment was the most feasible way possible to move forward,” said Senator S.M. Zafar, the government’s chief negotiator with the MMA and author of the final draft of the agreement between the two sides which led to the passage of the 17th amendment.

The opposition, still smarting from the blow of the MMA’s deal with the government, violently disagrees. It has characterised the amendments as day-time robbery of the people’s rights.

Their hostility stems from the fear that President Musharraf is now in an unassailable position. He has got a vote of confidence from the Parliament, put to rest some of the ghosts of his controversial referendum, and, what is more, has constitutionalised his position with the help and backing of the religious parties.

A simple reading of the bill makes it clear that the President is the most powerful man in Pakistani politics. He now has the power to dissolve the Assembly and, within 15 days, send a reference to the Supreme Court to decide the matter within 30 days after the filing of the reference. While other interested parties are not barred from taking the dissolution matter to the Supreme Court, his reference practically restricts the issue to the confines of the presidency and the Supreme Court.

The President makes all the important military appointments and the Prime Minister’s suggestions are not binding on him. He has managed to get endorsed and constitutionally protected — in a one-off arrangement — the actions taken during the first three years of his tenure as Chief Executive and now through the vote of confidence has extended his tenure by another term.

The local government (devolution plan) system and the Police Act, both subjects of great debate, are protected for six years.

The biggest stumbling block — that of General Musharraf being the President of Pakistan and Chief of Army Staff at the same time, has also been sorted out by mentioning the relevant clause article 63(1) (d) prohibiting one man from holding two offices. But the clause becomes effective from December 31, 2004. Till then the constitution allows General Musharraf to be the legitimate president of the country and the army chief at the same time. His power is now virtually complete.

The opposition’s Alliance for Restoration of Democracy (ARD) is feeling frustrated because its ranks have been depleted by the deal that the MMA has struck with the government.

Pakistan Peoples Party leaders admit that they played along with the MMA’s politics of fence-sitting because they had no other option.”There is nothing in the MMA’s acceptance of General Musharraf’s second coup, the 17th amendment, that surprises us. The only element of surprise is that it took the mullah-military pact a whole year to mature. We put up with the MMA’s backroom deals because of their public posture of savaging President Musharraf in public. It supported our stance and we had to remain in sync,” said a senior PPP leader.

While the ARD and its newly-formed auxiliary opposition alliance in the Senate, the 8-party Democratic Alliance, looks shaken, the MMA has not exactly gained all that much. For one thing, by casting its vote in favour of the 17th amendment, the MMA has gone against the very grain of the constituency that voted for it. Its vote-bank is a confusing mix of anti-US, anti-reform, pro-Sharia, socially-marginalised, economically-deprived, and politically-frustrated groups, with one thing in common: dislike for General Musharraf’s policies — especially towards Afghanistan and India. This dislike was expressed in the most extreme form: a second suicide attack on General Musharraf involving two Pakistanis — one from Poonch and the other from Swat.

The MMA’s deal with the government and General Musharraf is an affront to their constituency. Its grudge against the ruling generals has, ironically, been nursed for nearly four years by the religious alliance’s own leaders. Beyond the loss-and-gain calculus of groups and parties lie even harsher realities. The 17th amendment has brought to the fore stronger political battle lines. The military, its Punjab-based support group, the PML (Q), and the religious elite stand on one side of the fence. Most of the smaller parties from the provinces, especially the nationalists, and two of country’s mainstream political forces: the PPPP and the PML (N) are ranged on the other. Between these two lies a constitution on whose authentic version both sides still disagree.