“As a film-maker, you can’t hide behind any one” 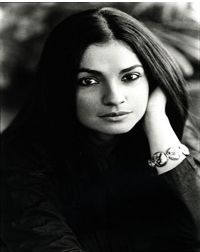 Q: Have you ever thought of casting your father in your movies?

A: That’s an unusual question — no one has ever asked me that before! I’ve thought of it very often. In fact, many times there have been roles that I’ve thought would be perfect for him and I’ve pestered him to do them, but the fact is that though I know he is brilliant when enacting a scene as a director, the minute the camera comes on, he becomes extremely self-conscious. I’ve never pushed him because I know it would be sheer torture for him.

Q: How has it been working with your father as a director?

A: I began with him, so I don’t know any other way. He is the kind of director that creates an environment in which his actors feel very comfortable. In fact, I probably got the worst of it because every time he couldn’t shout at anyone else, he’d turn around and scream at me! We’ve had our share of fights too, because I would want to leave a shot half-way and he would tell me to trust myself, give a bad shot rather than constantly make attempts at greatness, and that’s when I learnt to let go.

Q: What made you launch a new production company when you had previous successes from your old one?

A: Well, till recently I was running a company called Pooja Bhatt Productions in tandem with my uncle, Mukesh Bhatt. I felt the need to branch out and start an independent company because even when your family is as supportive as mine, you need to move out in order to find your own voice and individuality. I felt most of the movies I was making earlier reflected my uncle’s personality. Women have an eye for detailing and can turn around a set in a limited budget because they are used to doing it around their homes. I wanted to find my own world, hence launched Fish Eye Network, and since then have produced films like Sur and Jism which have earned me credibility.

Q: So was there any rift between you and your uncle?

A: Not a rift, but a clash of ideologies. He is still very accessible to me and whenever I need advice, I go to him. But, what I was basically against was the archaic way of working, which most production houses at the time, including ours, adopted. I believe in transparency and accountability. Also, Mukesh is a businessman and believes in hard-core commercial movies, which is fine, but I don’t want that. I would rather have modest success and would prefer to make a movie that can change things.

Q: You keep saying that you haven’t given up acting, but at the same time you haven’t been seen on the screen for a while. Why is that?

A: I acted in Zakhm in 1999 and then I did a film last year called Everybody says I ‘m fine. But, the fact is that at 17 I did Daddy, and by 21 was the biggest star I could ever imagine myself to be and was independent financially, and at 22, was saying, ‘now what?’ I needed some satisfaction creatively and for me an acting career has to be a challenge. I don’t want to be in a film just because it is a commercial set-up or someone is giving me X amount of money. I’d rather make that money by taking a chance as a film-maker.

As an actor, I am only good with certain kinds of roles. I was never meant to be a glamour girl — although I have no problems with that and have the greatest respect for Madhuri and Sri Devi, etc. — but that is not me. As long as I am given a role I find interesting and unique, which makes me feel that I can push my limit as an actress, I am prepared to do it. I am 31 years old, can’t hope to compete with someone who is 21, and shouldn’t. I couldn’t be the conventional Indian heroine at 25 and have no intention of being that at 31. And, quite honestly, for the next two years my priority is my company because there is nobody else to fall back on, so I can’t just disappear for 50 days with my company’s work-load pressure because it would be doing great injustice to both sides. So, if it’s a 15-20 days cameo role, sure I can make the time.

Q: Which was your most challenging role?

A: My role in Zakhm was by far the most challenging, for it brought with it the pressure of playing a woman who is so relevant to my father’s life, and was a demanding role professionally. Through the movie, I discovered that my grandmother was a really tough cookie. It was not what she did or didn’t do so much as how she did it. There was so much angst that the family put up with but the face she projected was always one of dignity and of being in control. They don’t make women like that any more.

Q: What are your immediate plans regarding film production?

A: I’ve just finished making Paap and until the film releases, it isn’t really behind me. Soon after that I’m going to be starting another film which my father will be writing for me and which will star my brother. We are casting him although he didn’t really want to be an actor. I am an incurable romantic at heart, so it is a love story. Then I’m going to take a holiday!

Q: Do you concur with your father that one should invest in memories and make autobiographical movies?

A: I have great admiration for people who can write books about their lives or make movies about it because I know what it takes. As an actor you have to revisit parts of your life in order to evoke emotions from your audience and it is an exhausting process. However, we can hide behind the character and get away with it. But as a film-maker, you can’t hide behind anyone.

Also, if you have a life that is rich and can tell that tale articulately, then hats off to you. I would be extremely vain to want to tell my story because I haven’t even led two per cent of the life my father has. I’ve had the privilege of having parents like my father and mother and so didn’t have to grow up before my time like he did. If 20 years down the line or even five, for that matter, I feel that I do have something to say about my life that is worth saying and have the courage to say it, I might, but right now I don’t think I have a personal story to tell. I have a lot of living to do to even attempt making a film like Zakhm.