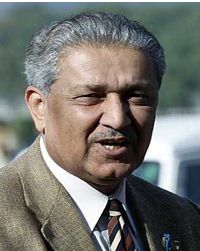 The shocking revelation that some Pakistani scientists might have sold nuclear technology to Iran and possibly to other countries as well raises serious concerns about the management of our nuclear programme and policy-making process. What shook the ivory towers of Islamabad is that the list of suspects included none other than the architect of Pakistan’s nuclear bomb — Dr. Abdul Qadeer Khan. At least three top scientists, linked with the country’s main nuclear facility at Kahuta, are being questioned for allegedly breaching nuclear export controls for either financial or ideological reasons.

While Iran has not directly identified Pakistan as a supplier, Pakistani individuals and companies are strongly implicated as sources of crucial technology that helped put Iran on a fast track towards becoming a nuclear weapons power. There are also suspicions that some top Pakistani scientists may have also been linked with the Libyan and North Korean nuclear programmes.

The illegal sale of nuclear secrets came to light two months ago when Iranian leaders handed President Musharraf a list of the scientists allegedly involved in the sale during his visit to Tehran. Iran also passed on the information to the International Atomic Energy Agency after agreeing to open its nuclear facilities for inspection. The sensational disclosure led to increased pressure on Pakistan from Washington and international nuclear inspectors to question Dr A.Q Khan and some of his close aides at Khan Research Laboratories (KRL), backed by evidence that Pakistan was the source of crucial technology transfer to enrich uranium for Iran, North Korea and possibly other nations. New questions about Pakistan’s role have also been raised by Libya’s decision to reveal and dismantle its nuclear weapons programme. Until then Islamabad had firmly denied that KRL was the source of nuclear proliferation, maintaining that its stringent command and control system guarantee any leakage of nuclear secrets. However, the damning evidence out of Iran, left the Pakistan government with no choice but to come clean. Last month Pakistani security agencies detained Dr. Mohammed Farooq, a director at the Khan Research Laboratories, and Yasin Chohan, both key players in Pakistan’s successful nuclear tests in 1998 for questioning. Dr. Farooq has been a close aide of Dr. A.Q Khan.

Although vigorusly denied by Pakistani officials, some reports suggest the scientists were also interrogated by the FBI. This is not the first time that Americans have been involved in the questioning of Pakistani nuclear scientists. Two other scientists who were detained last year for their alleged links with Al Qaeda and the former Taliban regime in Afghanistan were also queried by them. Initially Pakistani officials maintained the scientists were “undergoing a debriefing session.” “People associated with sensitive programmes are governed by stringent personnel dependability and debrief programmes,” said a foreign ministry official. “There are reports about the many sources from where Iran could have obtained nuclear technology, including several western companies and individuals. The focus should be on checking out those sources.” However, later the government admitted that the three scientists, driven by personal greed, might have sold nuclear secrets.

Investigations have shown that nuclear secrets were passed on to Iran at the end of the 1980s, when Dr. Khan was heading the country’s nuclear weapons programme. According to a senior security official the transfer of sensitive technology and equipment could not have been possible without the connivance of KRL’s top management. Dr. Khan remained the head of the KRL for more than 26 years before he was sacked for his alleged links with North Korea’s nuclear programme. He is now advisor to the Prime Minister on science and technology. Investigators are also collecting details of assets owned by the suspects. “Some top scientists have accumulated huge wealth and own palatial houses,” said a senior security official. “We are trying to determine the source of their wealth.”

The blueprints of Iran’s nuclear plant, reviewed by the IAEA, depicts a type of centrifuge that is nearly identical to a machine reportedly used by Pakistan in the early years of its nuclear programme and is one of several designs known to have been used for uranium enrichment. International nuclear inspectors believe the plans and components, which were acquired over several instalments from the late 1980s to the mid-1990s, allowed Iran to overcome several major technological hurdles in making its own enriched uranium, a necessary ingredient in nuclear weapons.

Acquiring the drawings and a few components was a tremendous boost to Iran’s centrifuge efforts. The scientists apparently used German go-betweens to sell their secrets to Iran. They were also helped by two Sri Lankan businessmen based in Dubai when they passed on details of Pakistani nuclear technology during the late 1980s. Intriguingly, that was also the period when General Aslam Beg was the Chief of Army Staff and reportedly advocated the transfer of nuclear technology to Iran. According to former finance minister Ishaq Dar, General Beg told Nawaz Sharif that Iran was prepared to pay 20 billion dollars for nuclear know-how. This raises serious questions about whether it was possible for Pakistan’s top scientists to deal with a foreign country without the knowledge of the army high command, which controls the country’s nuclear programme.

There are also investigations underway to determine if Pakistani nuclear technology has spread elsewhere in the Middle East and Asia, but so far the evidence points largely to the exchange of scientists with some countries, including Myanmar.

The government said it was determined to purge corrupt scientists from the country’s nuclear programme. “We will not allow any individual to play with the security of the country,” says a senior official. The question remains whether the government will broaden its investigation to other elements believed to be responsible for putting the country’s security at stake because of their blinkered worldview.