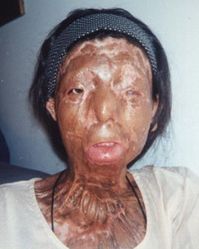 In the afternoon of May 14, 2000, a young woman named Fakhra was horribly disfigured for life. According to the statement she gave police, Fakhra was taking a nap with her five-year-old son when there was a knock on the front door to her flat. When she opened it and saw a man standing there, she frantically tried to push the door shut. But the unwelcome visitor forced his way in and pulled out a bottle of acid from his pocket. As she held out her arms in a vain attempt to protect herself, he threw its contents on her.

Fakhra screamed in agony, over and over again, as the acid seared its way relentlessly into her flesh, the fumes from it billowing around her, the acrid smell spreading through the small flat. Her face, neck, chest and arms were horribly lacerated, the skin tissue scorched. Evidently not satisfied with the terrible injuries he had already inflicted on her, the man then tried to force the remaining contents of the bottle into her mouth but was unsuccessful. Fakhra’s brother-in-law, who also happened to be present in the flat, was injured as he tried to intervene.

Amidst the commotion, the man threw down the bottle of acid and ran out of the flat. At least two people saw him dashing down the stairs with an accomplice, described as a “thin, dark man.”

The injured were taken to Civil Hospital, after which Shahida Malik, mother-in-law of Fakhra’s sister, filed an FIR at the Napier Road police station.

The four witnesses, including the two injured, were unanimous in the statements they gave to the investigating officer, sub-inspector Altaf Sial. According to them, the attacker was Fakhra’s estranged husband, Bilal Khar, son of Mustafa Khar, ex-MNA and one of Pakistan’s most powerful feudals.

As the police were ostensibly unable to apprehend Bilal, an inability that reportedly had much to do with his cordial relations with them, he was declared an absconder. However, after the case received much publicity, he was finally arrested on November 1, 2002, in Muzaffargarh and charged with attempted murder under sections 324, 326 and 34 of the Pakistan Penal Code (PPC). Meanwhile some time earlier, Tehmina Durrani, Bilal’s stepmother, had managed to arrange for Fakhra’s treatment at a hospital in Italy and taken her there.

On December 16, 2003, Bilal Khar was acquitted of the charges filed against him when all four prosecution witnesses — her sister Kiran, Kiran’s husband Irfan Malik who was also injured in the attack, his mother Shahida Malik, and his brother Amir Malik — turned hostile. They claimed in their evidence before the court that Bilal, who was present during the proceedings, was not the culprit. According to the district attorney, South, Abdur Rehman Baloch, who represented the prosecution’s case, “They said they had never seen Fakhra’s husband before, and that they had only named the attacker, who they now described in court as ‘a pock-marked man’, as Bilal Khar in their statements to the police because Fakhra had identified him as such.”

From this one must conclude that in the 11 months that Fakhra had been married to Bilal Khar before the attack took place, her family had never even seen his photograph, let alone been introduced to him, although the marriage took place in Karachi. However, according to the statement given to the police by Kiran, Fakhra’s sister, Bilal often came over to visit during their courtship. Bilal’s family was vehemently against the marriage, his fourth, because Fakhra was a call-girl from Napier Road, where she and her family live in one of the cramped flats in the notorious Bulbul-i-Hazar Dastan building. The couple’s relationship was soon on the rocks, with Fakhra accusing him of repeated sexual and physical abuse. Fakhra’s determination to retain the custody of her son from a previous marriage was also reportedly a bone of contention between them. The fact of their estrangement was reiterated by several of the witnesses in the police statements.

While this was not denied in court, the witnesses retracted their earlier statements regarding the identity of the accused. However, they stand in no danger of being accused of perjury. Statements made before the police under section 161 of the Criminal Procedure Code (CrPc) have no legal standing as such, and are essentially the record of the police investigation reduced to notes. In fact, section 162 of the CrPc explicitly states, “Statements recorded under CrPc section 161 cannot be produced in court as evidence. In fact these are inadmissible pieces of evidence. Such statements are not to be signed by witnesses who are making them.” 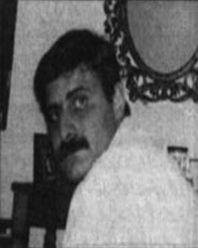 In Pakistan, it is common knowledge that, in the absence of a witness protection programme, when there is social and political disparity between the two parties in court, pressure, financial or otherwise, is often brought to bear upon witnesses to change their statements. If, in this case, the investigating officer had ensured that the witnesses had recorded their statements before a magistrate, a procedure under section 164 of the CrPc, they would have been guilty of perjury had they retracted their statements. According to criminal lawyer Khawaja Naveed Ahmed, “In such a case, where the accused is so influential, it was important that the investigating officer have the witnesses record their statements before a magistrate. I would describe this as an instance of deliberate omission, where the police took the investigation very lightly, something that isn’t uncommon when one of the parties is from an influential family.”

When it was clear that Fakhra may be taken abroad for treatment and her testimony would thus not be available during the trial, it was all the more imperative that her statement be recorded before a magistrate. “The main lacunae in the case was that the principal victim was transported out of the country,” says Khawaja Naveed. “Although this helped her personally, the prosecution’s case suffered a blow.”

The fact that Fakhra’s brother-in-law, Irfan Malik, who was also injured in the attack, denied that Bilal Khar was the culprit, further compromised the prosecution.

According to Khawaja Naveed, once an injured witness exonerates the accused, the judge has no option but to acquit him. “The judge has to record his judgement on the basis of pure evidence,” he explains. “He cannot draw inferences, make conjectures or be influenced by his own opinion.”

However, if a competent prosecution is able to puncture holes in a witness’ testimony, the judge can consider incriminating evidence, cause of action and motive to arrive at a decision.

Although Shahida Malik deposed in court that Fakhra was out of the country and unlikely to return in the forseeable future, in the event that she does return, she can appeal the judgement and request that her evidence be recorded. Says Khawaja Naveed, “She can file an appeal in the high court under section 428, according to which the appellate court has the power to record evidence — which it does not normally do — and in the interest of justice, summon a witness not examined earlier. The court can also set aside the judgement, remand back the case to the trial court with directions to record the statement of the victim and rewrite the judgement.” This argument however may well be purely academic, as her lawyer, district attorney Baloch himself believes that there is virtually no chance of the verdict being set aside. “The other witnesses haven’t supported her allegation and that fatally weakens her case. If she had been the sole witness, she would have stood a better chance,” he says.

Shahadat Awan, Bilal Khar’s defence lawyer, states, “The burden was on the prosecution to prove the case. With their star witness out of the country, their case was very weak.”

Awan filed an application for his client’s acquittal under section 265-K CrPc on the grounds, among others, that, “The complainants…have not identified/implicated the accused…it is a case of political victimisation and as the accused belonged to a political family opposed to the government, therefore, he has been falsely roped into this case…the accused is an ex-MPA and being prosecuted to harass him…in the circumstances the trial of the above named accused will be an exercise in futility.”

Bilal, who had been bailed out on 100,000 rupees on March 22, 2003, having served less than four months in prison, was in court when the acquittal was announced.

Fakhra meanwhile remains abroad undergoing treatment, her present condition unknown. Two years ago, before her departure, due to the contractures she had developed, she was barely able to breathe and the sight in her left eye was becoming increasingly impaired. The scars on her psyche are undoubtedly even greater.

However, her case elicits little sympathy among those who have a duty towards her. When asked whether he has ever met her, the lawyer entrusted with prosecuting her attacker, shakes his head dismissively as a look of distaste crosses his face. In Pakistan, being a woman, and a prostitute, is obviously double jeopardy.