Creativity in learning is about fostering flexibility, openness for the new, the ability to adapt or to see new ways of doings things and the courage to face the unexpected. Giving play to this creative gesture, Chawkandi Art’s recent show, “The Other Side,” cuts through standard practices of predictable procedures to entertain the wonders of divergent thinking. Taking a fresh view of emerging art by recent NCA graduates, curator Imran Qureshi has compiled a selection of alternate art expressions by six artists. Originally specialising in painting, sculpture or miniature art, these artists during the course of their work have consciously or unconsciously gravitated towards other disciplines of visual arts. It is this engagement with other genres and consequent production of hybrid art forms and concepts that give definition to “The Other Side.” 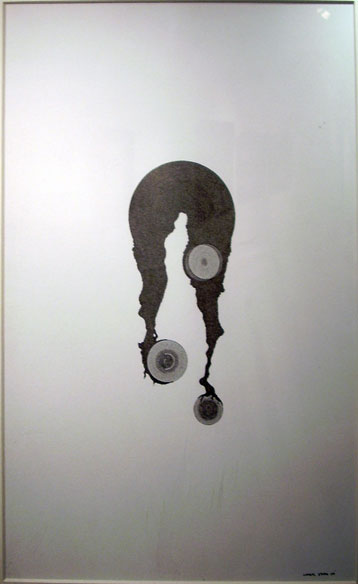 A printmaker by qualification, Waqas Khan flirts with miniature art to reference the basic pardakht process of applying paints on wasli with a fine, single squirrel-hair brush. Situated between George Seurat’s prominent pure colour pointillism and the miniature method of building mass with micro dots, Waqas Khan’s technique consists of applying marks on wasli with a felt-tip pen. In the absence of a serious, structured concept, the artist opts for ambiguous configurations, densely packed with dotted mass in varying tonalities of black. Giving the appearance of clusters of crawly micro-organisms up close, the works speak of an artist’s obsession with mark-making and a penchant for outrÃ© designs. The technique also reveals his capacity to labour — an important miniature requisite — and the monochrome play with pattern is an assertion of his printmaker sensibility.

The dot-to-dot pardakht mannerism was also sourced by Noor Ali Chagani but his was a novel interpretation when he replicated it with thousands of miniature-sized terracotta bricks encompassed within a picture frame. These mini brick wall simulations were inscribed with graffiti art. This sculptural translation of the miniature pardakht ethos is a huge move away from the refined painterly act to the coarsely-textured three-dimensional forms.

A more visible engagement with miniature art is evident in printmaker Imran Mudassar’s new work. Analysing the issues of life and its destruction, he accents the current danger to the human being by war weaponry. By creating a dialogue between his body and war related objects/events, he portrays such states as the menace of threat, the infliction of wounds and the pain of injury. The topicality of the subject draws in the viewer but it is the emphasis on the soft rendering of the figure in ‘Siyah Qalam’ that takes him close to the miniature sensibility, yet the stark, monochrome and very contemporary treatment keeps him rooted in the print aesthetic. 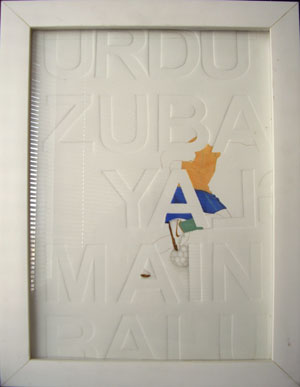 In the works of Shoaib Mehmood there is a reversal as we see a miniature artist venturing into the printmaking techniques of embossing and screen printing to create a body of work. Working on language as a determinant of identity, he plays with the character of Urdu and English to create a statement. A clever imposition of embossed English text cutting through Urdu lettering forced one to take a critical look at the changing status of Urdu as a spoken and written language, much like the intrusion of Minglish in verbal and scripted Urdu. Well conceived and executed, this work was independent of any miniature influence.

Huma Iftekhar is yet another artist digressing from her miniature practice to an alternate medium. An overlap, layering, juxtaposition or repetition of computer-generated architectural patterns and geometric forms have shifted her interest towards the exploration of mechanical design. She also combined paper cut-out forms and painted surfaces to create novel tactile works — her stencilled series of overturned chair images speak of power politics and the ‘hot seat’ imbroglio.

Among the most radical departures was the eerie presence of soft sculptures by Kakul Kamran Kureshi. A formally-trained painter, her adeptness with felt material to create animal sculptures in somewhat awkward postures ties in with the off-kilter subjects of some of her paintings. But the three-dimensionality of the works contrasts with her former endeavours. 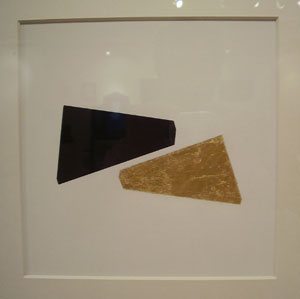 Imran Qureshi’s selection of art in this show centralises on works that smack of creative innovation — especially interesting is the ease with which some of the artists entertained sculptural forms in new media. These shifts are not faculty directed or monitored — they are self-initiated efforts and speak of moments when artists flex their creative urges.

It is not unusual for artists to experiment with new media but today’s art climate is much more conducive to ‘newness’ than before. The nature of such shifts has been accelerated by the post-modern stance of open-ended inquiries where there are no closures or conclusions.