By launching a stiff rearguard action, Pakistan’s beleaguered President Asif Ali Zardari seemed to have staved off a formidable challenge to his position as head of state. But even then he is in a precarious position. Now that the Supreme Court of Pakistan has struck down the National Reconciliation Ordinance, the process of prosecuting all individuals whose cases were closed under the infamous NRO, which former president Pervez Musharraf had promulgated as part of a larger political deal with the leadership of the PPP, will likely begin. Because of that amnesty deal, proceedings in thousands of criminal and corruption trials came to an abrupt halt, allowing hundreds of politicians and bureaucrats, including President Zardari himself and his close confidants, to claw back into the political and administrative mainstream.

Even though President Zardari is technically protected against prosecution while in office, reopening of the cases against his right-hand men, like Interior Minister Rehman Malik, can severely upset his power applecart.

But that might not set the stage for his removal from office. “I think he has tided over the crisis, which was only created by a handful of people in the media, who were giving dates of his departure and now, by the grace of Allah, have egg on their faces,” said a close confidant of President Zardari.

This new sense of relief in the presidential camp has been caused by a string of manoeuvres the party’s leadership has made on behalf of the president to ward off a public opinion build-up for his ouster from power. As part of the survival strategy, the president’s core team has launched a fierce projection drive across the country, flexing PPP’s muscle, particularly in Sindh. The party’s district-level leadership has been galvanised to assert its political profile in order to send the signal that they would not take any attempt to throw out the party co-chairperson lying down.

More significantly, the presidential camp has also moved hastily to remove the perception that Zardari is personally dragging his feet on shedding powers of the office of the president acquired under the dictatorial rule of Musharraf. Handing over the chair of the National Command Authority, the country’s highest decision-making body on matters concerning nuclear weapons, to the prime minister is one such step in this regard.

Under the same cut-your-losses-but-stay plan, President Zardari has jettisoned his un-splendid isolation and has begun interacting with members of the media and other opinion-making ciricles. “We have realised that our case is going unsung by default, and a distant president has become a soft target for everyone to lay into,” said the presidential aide, who claims to have contributed to the new-look campaign on behalf of the president.

But President Zardari’s problems are much deeper than the issue of his image. He has fallen afoul of Pakistan’s military and the intelligence agencies, whose conclusion is that he is a national security hazard. This dim view of the co-chairperson of the country’s largest political party is also shared by Zardari’s allies, including the MQM and PML-N, even though both continue to hang on to the coat-tails of coalition governments in the Centre, Sindh, and the Punjab.

Political sources in Sindh claim that Zardari’s ability to regain the trust of the establishment and his allies has now hit rock-bottom. They forecast that the process of his exit from power is likely to speed up in the coming weeks, starting from possible court verdicts on the cases of corruption and heinous crimes that are getting reopened. 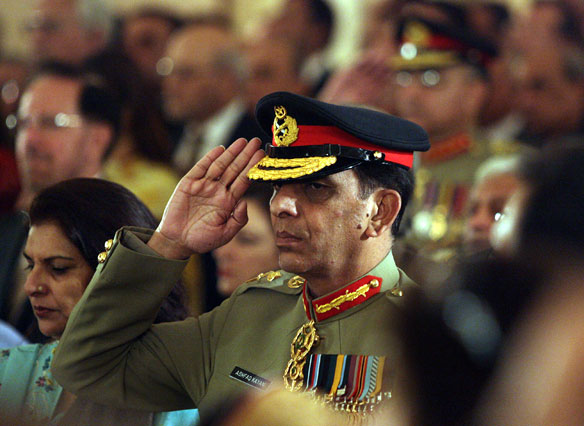 “He might be able to drag it out, but he won’t be able to get out of it. He can advise the prime minister to dissolve the National Assembly, and then create an interim setup for the next election. He can, from abroad, sack General Ashfaq Pervaiz Kayani. He has these and other options but can he exercise them? I think not. His presence in the system cannot work anymore,” says a source requesting anonymity.

The same source claims that even if Zardari sheds his powers under the 17th amendment to the prime minister, particularly the power to appoint the service chiefs, sidelines the undesirable elements around him, and agrees to become a mere figurehead, the window of opportunity for him to be acceptable as supreme commander of the armed forces is too narrow now to squeeze through.

The view in Islamabad’s informed circles is not much different. One reliable source connected to the military establishment claims that Zardari has shown a complete “incapacity to do the right thing at the right time.” “He has had to be forced into retreating from absurd and dangerous courses of action. Three examples can be quoted out of many. The first was the restoration of the judges. The second was the National Reconciliation Order. The third was the Kerry-Lugar Bill. On all three counts the president was seen involved in dangerous games and eventually caved in when he was firmly told [by the army] to behave.” It should be noted that although the Kerry-Lugar Bill was eventually accepted by the government, it was at best a partial victory, since army criticism and public outcry forced the bill to be debated in Parliament, something the government was hoping to avoid.

The same source also claims that the president’s actions have convinced the powerful governments of Qatar, Saudi Arabia and even the UAE that in case he is dislodged they would keep quiet and not let him fly into their countries. “Even the US has given up on him. They say ‘as long as the change is constitutional it is acceptable as Pakistan’s internal matter,’” says the source.

But the presidential camp is still confident. Most of President Zardari’s political advisers are of the opinion that his ouster plans are far-fetched and are bound to fail. They cite the fact that he controls the levers of the party, which is bound to rally behind him in case he is booted out in a manner that is politically and constitutionally questionable. They also say that Zardari would ‘fight it out in the event he is asked to leave’ — a position the president took in his speech on the founding day celebrations of the PPP three weeks ago. “Zardari is here to stay for five years; make no mistake about it,” says one of his advisors.

If that is to be the shape of things to come, then there is little doubt that there would be much political bloodletting in the coming months. It is an open secret that there is no love lost between the president and the present army chief who, ironically, paved the way for his accession to power by putting his weight behind the due democratic process.

General Kayani’s contact with President Zardari is strictly on a must-need-to-meet basis, and even then the ambiance is cold and tense. “It is in the air and in their eyes, but not on their tongues,” says one source, who has sat in one of these meetings.

The army chief’s tension is built around the fact that at a time when the country needs unity of command and focus, the president’s views and actions on national security matters are found in complete variance even with his own prime minister and the federal cabinet.

“Is it coincidence that the president is always found on the opposite side of the consensus on national security matters? Or is it a conspiracy? Is it a question of his capacity or his commitment?” These are some of the questions that routinely pop up in debates in formation commanders’ meetings.

By all means, these are loaded questions whose answers depend on which side of the political spectrum you come from. But one thing is for sure: in the past every time these or similar questions got asked, political upheaval followed swiftly on their heels. Unfortunately, it doesn’t look to be any different this time around either.