Running a gallery in these times is undoubtedly a high-risk venture, yet unless new initiatives to promote the burgeoning breed of young artists are undertaken, the art scene may face stagnation. Fortunately, Karachi’s art scene appears to be thriving, despite the economic downturn. A new gallery, Poppy Seed, located in Shafi Court, has just opened its doors to art and art lovers. The approach is challenging, ending in a narrow staircase that leads to the first floor, but the gallery hall is spacious, with an environment that has potential.

Poppy Seed opened with a group exhibition of works by seven young artists, organised by the gallery curator Sumbul Khan. The exhibition theme examined the work of the media and was aptly titled, “The Moving Image.” As one entered the gallery, a text on the wall described the theme of the event interpreted by the artists in dramatically different ways. It read, “The Moving Image is a conversation between seven artists about how the media boom has transformed lived reality in urban Pakistan. The work addresses concerns about the power of the moving image to create an illusive reality, a hyper-reality, for uncritical audiences. 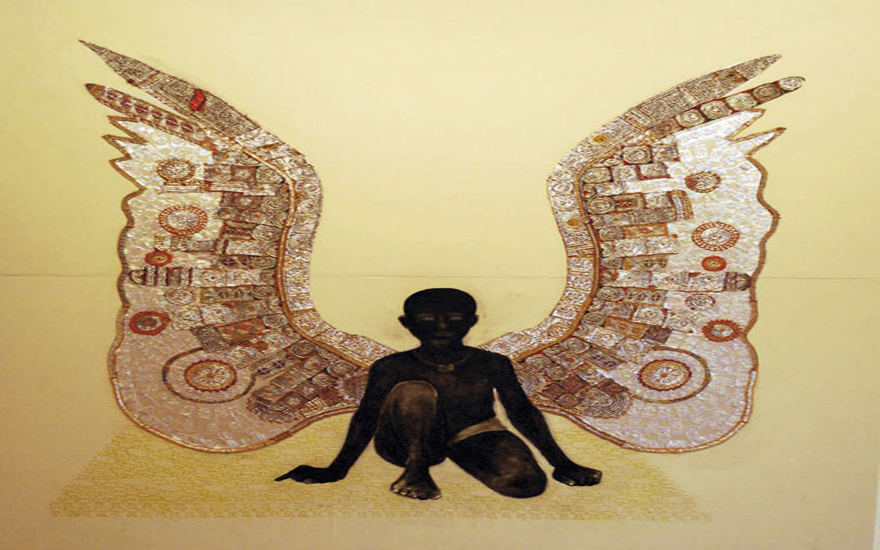 “The myth of the objective reportage, the ever-watchful gaze of the well-informed anchor and the particularity of network agendas in tailoring coverage are referenced here. Other voices question the glamorous representation of the real world in entertainment programmes, querying how these representations speak to the psyche of the usual consumer and effects changes in his/her perceptions and expectations of life.”

The contributing artists responded vigorously to the subject with their highly individualistic and unique styles. Mixed exhibitions are invariably difficult to hang but despite the artists’ different approaches to the subject, the varied viewpoints worked well together and in a way that did not invite comparison. The artworks revolved around recurring references and urban myths which invade the psyche of modern man.

While perhaps not immediately accessible, several pieces were visually intriguing, demanding the attention of the viewer in extraordinary ways. The artists expressed their feelings through a number of interesting methods and disciplines as they questioned the responsibility of the media and its power to formulate public opinions while addressing a vulnerable audience.

Irfan Hasan, a graduate of NCA, trained as a miniaturist, is an artist to watch out for. His unique mastery over his media was evident in a sequence of work, ‘Standby,’ a vertical composition executed in gouache and screen-print on wasli, and ‘Noise’ in which an open-mouthed dog’s head appeared to cover a listener’s ear. Most entrancing was the artist’s sensitive and skilled use of the media, with delicate brushwork that appeared to delineate every detail of the facial hair as well as the wrinkles.

‘I-We,’ was the title of Roohi Ahmed’s work. Seldom repeating her work offered in exhibitions, she has a multitude of ways to capture an audience. Here, she mapped out a strong, wall-based assemblage with wires and text, and a drip stand with drip bags classified ‘Violence,’ ‘Eroticism,’ ‘Obsession’ and ‘Exposure.’

One of the most compelling experiences of the show was the interaction of portraits in fibre glass, wood and acrylic created by Munnawar Ali Syed. The well-known illusion of the eyes of the Mona Lisa following one around in the Louvre Museum, had nothing on Munnawar’s artworks where, not only did the eyes follow the observer, but the entire face seemed to move. One tried walking up and down in front of it and it was a very eerie but incredible observation. The central theme of the gaze confronting the viewer with every turn of the head appeared to confirm the artist’s interest in the observer intervening in a ‘partnership’ with the artwork.

Farah Jamaluddin’s work, ‘Mera Moqaf’ (‘My Agenda’), consisted of a collage comprising patterned circles, squares and flower-like shapes varying in design and size. Mirrors added to the configuration brought the outside world into the collage by reflecting tiny aspects of the hall. 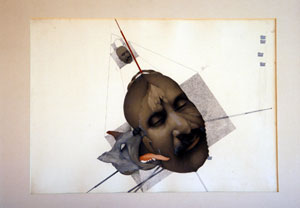 Abdullah Sayeed’s work alluded to the dilemma of looking and absorbing suggestion in the flickering molecules of neon light. In an electronic and painted aluminum installation, he stressed the power of words. Other pieces included cast Beeswax that appeared as a TV set; honey, permanent ink and emboss on wasli also formed part of the artist’s experimental approach. Syed continues to explore the possibilities of Beeswax as a medium, symbolising the mythical narratives of bees spreading news far and wide.

A very beautiful piece by Asad Hussain attracted considerable audience attention, and proved to be an exciting reminder of his growth and development as an artist. Titled ‘Morphing,’ its central figure was a charcoal-drawn angel, flanked by gorgeous, richly decorated all-encompassing wings. This piece was created with a painter’s sensitivity and a sculptors’s skilled hands. One remembers Asad from his student years at the Karachi School of Art; his witty junk sculptures often enlivened local group shows. This time round his mixed media compositions included charcoal, embroidery, pen on leather, and even a lamb created out of foam rubber.