The East has always been the fountainhead of prayer, mysticism and meditation. Ideas like commercialism, industrialisation and objectivism come from the West. In recent years the term global village is seeping through the internet and into people’s psyches. We are replacing all our age-old wisdom and finding shortcuts to make life faster and more lucrative.

Similarly, our art forms are also suffering. Artists are finding gimmicks to create a buzz whereas the real artist, who actually spends time with his work and creates art as a labour of love, is becoming an extinct creature.

R.M. Naeem’s work, entitled “Faith, Soul and Search,” was done over a period of three years and displayed at the Koel Gallery last month. This body of work was an eye-opener for many viewers and artists. It was, in essence, a larger view of humanity, and captured the essence of our background and roots as South-East Asians. 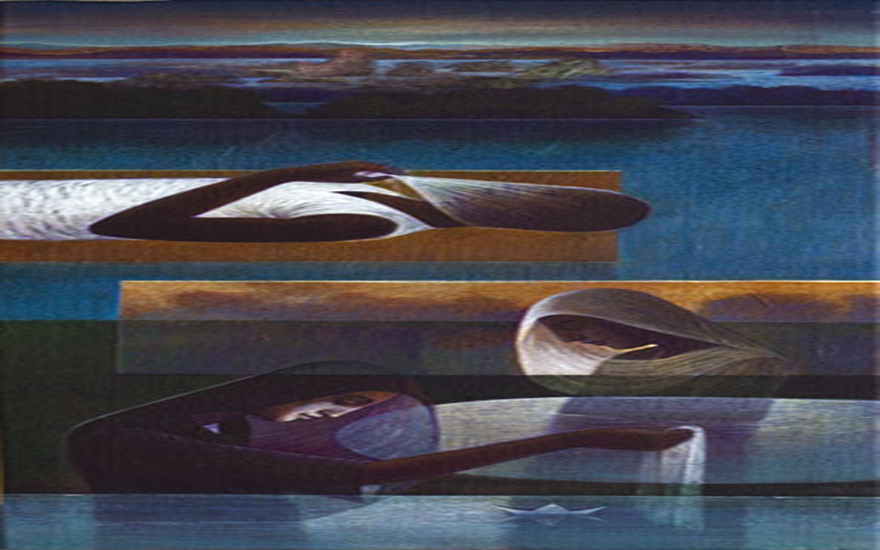 The narrative is not only of tales that we see around us every day but there are also references to fables told over time by elders to impart lifelong lessons. The stage is set to show people with heads bowed in meditation. Some of the figures seem to be going through an epiphany; others have covered eyes, perhaps a metaphor for the herd mentality. Some figures are in the process of disguising themselves; others are looking to the road signs for guidance.

The journey of man through the earth and beyond is depicted with the help of symbols. Symbols such as traffic signals, road blocks, boxes, pyramids, boats, the Kaaba, masks and the halo are all used to enhance the strong story-telling powers of the canvas.

A halo is strategically placed to remind us of the inner child, that innocence eroded in the grind of our day-to-day struggles, whose loss we mourn. The figures are mostly of men, but women and children are featured as well — silently, faithfully, searching for their true path in this life and beyond.

When asked about the absence of titles for the paintings, Naeem said that the three words, “Faith, Soul and Search,” would work as the titles for all the work in general.

Naeem’s skilfully composed and magnificently rendered canvases create a mysterious, layered revelation in painting. His training as a miniature artist comes across in the impeccable finish of these works. All in all, R.M Naeem’s art serves as a veritable window for self-reflection.