For four days in November, Pakistan hit the headlines the world over — and for once we didn’t have to cringe. It was Fashion Pakistan Week (FPW) that ruled the airwaves and it was the FPW ramp, and not a Taliban rampage, that got Pakistan on CNN, BBC and even the Conan O’Brien show!

FPW began with 32 designers, a shoe-string budget and a sceptical local press. And what the audience got was a superbly organised event that started on time, with no glitches, great music and the sleekest ramp ever seen in Pakistan. FPW closed to rave reviews and an international media blitz. But it was a rocky road to that smooth, seamless performance that raised the bar for all future shows.

First, Triple EEE, the original sponsors, didn’t come through — the sticking point apparently was control — which Fashion Pakistan (FP) rightly was not prepared to share. It fell to Ayesha Tammy Haq, FP’s newly appointed CEO, to come up with another sponsor — no mean feat with barely a week to go for opening day. She got MCB as the major sponsor and Abbott also came on board, but there was still a shortfall. With no options and time running out, Faiza Samee, Bunto Kazmi, Maheen Khan, Deepak Perwani and Rizwan Beyg stepped in and put in the rest. With security concerns at an all-time high, the venue had to be changed and kudos to the Marriott for taking on such a high-profile event and putting security in place — sniffer dogs et al!

“What FPW had going for it was amazing goodwill,” says Tammy Haq. Everybody involved worked selflessly to ensure that FPW was a success. People did stuff for free. There was an amazing spirit of camaraderie; everybody wanted to see it work. They took ownership and made FPW a success story that converted even the most sceptical.” It was only on October 26 that Rizwan called the Marriott, got WOW Factor to handle the lounges and show space. “I ran amok for a week,” says Rizwan. “I think a major reason behind FPW’s success is that there was no micro-management. I was given carte blanche by the board and I did my best to implement whatever I had seen at various international fashion weeks.”

The local press, apparently, wasn’t too supportive or enthusiastic pre-FPW. “There was no build-up, no hype,” says Tammy. “In fact, some were openly negative. The electronic media, however, played a very positive role.”

But Tammy had the proverbial ace up her sleeve: the international media. Her close involvement with the lawyers’ movement had brought her into close contact with all the major networks and newspapers. And they were all there to cover FPW: Kate Brooks for Time, Daniel Bereulak for Getty Images, CNN, BBC, Reuters, AFP …

Kudos also to the audience who packed the Marriott Marquee despite the event being labeled “an act of defiance against the Taliban” by the international media who printed or showed footage of the most provocative shots to prove their point. Unfortunately, what they missed out on was something far more important: that a group of people who had never done this before, pulled off such an ambitious event with such exemplary professionalism and finesse. And that is FPW’s real triumph.

“Everybody had a role to play and were given responsibility for different aspects of the show,” says Tammy. “Rizwan Beyg was the key coordinator to cue the models along with Deepak managing light and sound. Rizwan also briefed Aslam and Bary of WOW Factor on the ramp, seating plan, etc., which was a copy of what he had just seen in Milan Fashion Week. WOW Factor translated that brief to perfection. We had Production 021 handling backstage and they did a brilliant job.” Maheen Khan, Chairperson FP, says that for her, “Production 021 were the unsung heroes of FPW. Backstage was flawless and that resulted in a flawless show.” 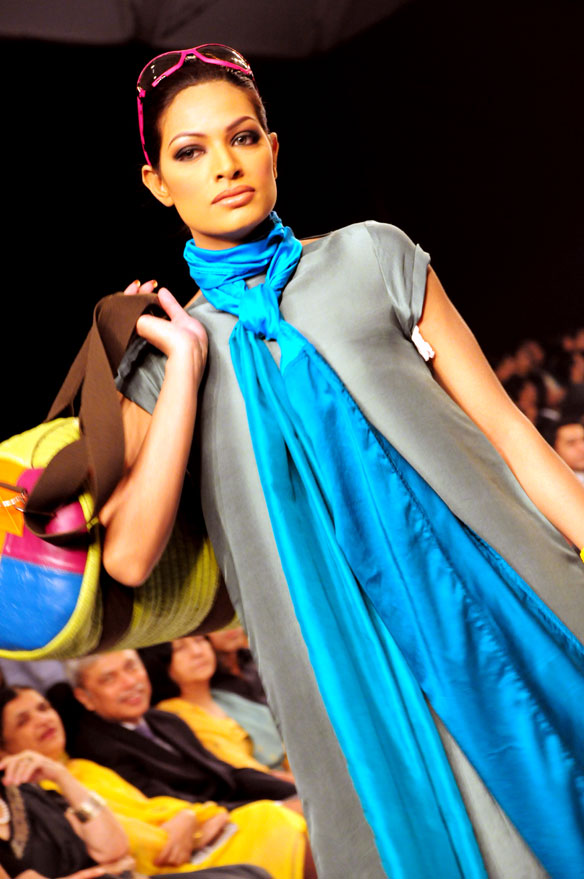 Hair and makeup was a surprise — there were no style gurus to be seen. SABS handled a gruelling four-day schedule following new designer briefs every day. Khawar Riaz was responsible for the male models. Raheel Rao coordinated the models from Lahore and Karachi. The indefatigable Tehmina Khalid was responsible for organising the press. Arif Mehmood and Aesha Arif were behind the dramatic images in the red carpet area. Tapu Javeri did a superb job with the music — as always. “For once there were no divas,” says Tammy. “All the senior designers helped their junior counterparts. It was amazing to see the spirit that fired everyone involved.”

Now to what went down that uber-chic ramp. It was really a mix of the good, the mediocre and the positively ugly. Fortunately there were very few in the last category, but sadly not enough in the first. However, it was inspiring to see exciting new talent showing alongside the all-time greats. Feeha Jamshed, Fahd Hussayn and Ismail Farid were outstanding in the young designer category. Nomi Ansari sent some very sophisticated, beautifully constructed creations down the ramp, while newcomer, Rizwanullah, with his mehndi-inspired collection, attracted attention for his ingenuity if nothing else. Ather Hafeez’s brilliant jewel-toned fantasy collection was a high-impact visual treat — long on style, but a little short on cut and construction. Design maestros Maheen Khan, Rizwan Beyg and Deepak Perwani showed their stunning Milan Fashion Week collections. As always, Sonya Battla defined style with a fluid, draped silhouette, sharpened by metal body armour and metal spikes. Faiza Samee showed a glimpse of the art of chandi ka varak highlighting her signature screen prints.

Though for their first show FP wanted everyone on board and understandably so, there should have been some judgement criteria in place to filter out those who really weren’t ready to participate in such an event.

It was great to see “real people” walk for their favourite designers: Ronak Lakhani and Tammy Haq for Faiza Samee and Tapu Javeri for Feeha Jamshed. And even better to see designers showing their support by walking for their friends: Feeha and Rizwanullah walked for each other, while Deepak Perwani walked for Kuki Concepts and Tanya Shafi Khan opened for Deepak Perwani. And what a nostalgic moment it was for those who were around when fashion in Pakistan was taking its first baby steps, to see trailblazer models, Freiha Altaf and Atiya Khan, walk the ramp again after decades for Faiza Samee and Deepak Perwani.

Members of the Lahore-based Pakistan Fashion Design Council were conspicuous by their absence. They chose not to participate even though they had been invited to join by Tammy three months before the event. “I personally rang up the chairperson and CEO of PFDC and invited them on board,” says Tammy. “Fashion Week doesn’t belong to us — it belongs to everyone. It’s not about personalities, its about building an institution and I wish people would understand and appreciate that and join us to work towards that goal. We hope to have 50 designers showing next March.”

FP has ambitious plans for the March show. “This time we didn’t have the funds to hire two sets of models so the segments were a little too long,” says Tammy. “Hopefully next time we will be able to pull off nine-minute segments. We’ve learnt a lot. We need better media management with media rooms where they can upload immediately. In time, perhaps, we can set up a polytechnic for cutting, sewing and finishing, fund fashion students, encourage textiles etc.” In the pipeline are plans to find FP a home. “We’re looking to rent a place where we can showcase 20 designers, open a fashion cafÃ© and install a permanent ramp to facilitate designers to have shows.”

FP already has MOU’s to send Pakistani designers to show in Miami, Dubai and Colombo. Ather Hafeez will be going to the Dubai Fashion Fiesta, Fahd Hussayn has been invited to show in Creations Fashion Week in Dubai and Feeha Jamshed will be participating in Colombo Fashion Week. Miami Fashion Week is still up for grabs.

Meanwhile, back on that gleaming white FPW ramp, when Deepak Perwani’s vibrant, festive collection for Milan Fashion Week closed FPW, the shower of glittering confetti said it all — it was celebration time!