For the first 12 years of his career, Shahid Afridi took tennis legend Andre Agassi’s maxim “Image is everything” to heart. With an ODI batting average under 25, Afridi was coasting along on the reputation he garnered in just his second match, when he scored the world’s fastest hundred. What Afridi lacked in achievement, he compensated by being the crowd favourite. His innings, usually lasted a dozen balls or so but his bravado, self-belief and ability to hit the ball a long, long way would send spectators into a frenzy. Afridi, it seemed, was content to be a charismatic underachiever, one who preferred to go out with a bang than savour the reputation that comes from being a winner.

Then, something changed last year. Perhaps it was the realisation that he had only a few years left in his career, most of which would be spent on the sidelines. Maybe he finally decided to take his bowling seriously and became an effective leg spinner. Most likely it was the advent of T20 cricket where even a couple of sixes can turn a match and less value is attached to each wicket. Suddenly Afridi had become a senior statesman and the emotional core of the Pakistan team. He is now the man the ball is thrown to whenever a wicket is needed and it is he who pumps up the team in the field. Most of all, even his batting has matured ever so slightly. Afridi will still throw his wicket away but he will also be content to follow boundaries with singles.

It is this sudden change in Afridi and the accolades that have followed, including being the standout player in the T20 World Championships and the T20 captaincy, that spurred veteran journalist Asif Noorani to write Boom Boom Shahid Afridi. The book is not a comprehensive biography; rather it captures the euphoria and excitement surrounding Pakistan’s foremost celebrity. Noorani personally interviewed Afridi after the T20 win and he has also provided snippets of an interview he gave to DawnNews. Also included are a conversation with Afridi’s supportive father and messages of encouragement from former cricketers, including Wasim Akram and Zaheer Abbas. 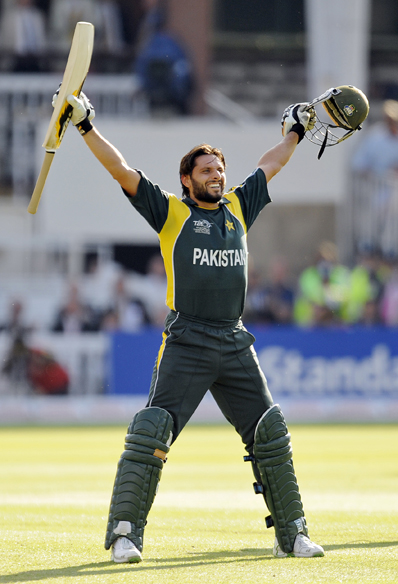 Afridi was the standout player in the T20 World Championships. Photo: AFP

Given the recent player revolt that led to the ouster of captain Younus Khan, one naturally searches the interview for clues that Afridi may have been unhappy under his captaincy. It is somewhat telling, then, that he doesn’t name Younus among his favourite captains. In the DawnNews interview, though, he is more than happy to lavish praise on Younus’ captaincy. What makes the interview conducted by Noorani so fascinating is Afridi’s complete honesty. He admits that he has been inconsistent throughout his career and that he often played a rash shot or two. He is also perfectly willing to concede that he joined the IPL mainly for mercenary reasons.

A number of cricket writers, on both sides of the border, contributed essays on the Afridi phenomenon. By far the most incisive is by Pakistani writer Saad Shafqat, who places Afridi’s career in its proper historical context. He is willing to cast a jaundiced eye on Afridi’s shortcomings but does not deny the man’s charisma, talent and ability.

Once Afridi’s exhilarating career comes to an end, there will be need of a more comprehensive look at his life and career. But Noorani’s book fills a void by capturing the daring-do, the feeling of not knowing what may happen next, that has defined Shahid Afridi.