The media may be known as the Fourth Estate but Nadeem Ahsan, an employee of an NGO working with the IDPs, declares, “Like the other three pillars of the state, it must also act responsibly.” It has almost become a clichÃ© to say that that the media in Pakistan has evolved in leaps and bounds in recent years. Apparent media freedom has definitely increased but with this freedom, of course, comes responsibility and here opinion is divided as to whether the media is behaving responsibly or not.

According to a Gilani Research Foundation survey carried out by Gallup Pakistan, despite being enthusiastic consumers of media, more than half of all Pakistanis (57%) blamed the media for the political instability in the country, 31% disagreed while 12% of the respondents were unsure.

The respondents were of the opinion that the media plays up certain events and, according to columnist Imran Kureshi, “Political programmes on our television channels are probably the only political institution which are noisier than the assemblies. The fiction they present is better than soap operas, leaving the viewer on the edge of his seat waiting for the next episode. The crises they cook up have more ingredients than the cookery shows and the superheroes and villains they create are more imaginative than the cartoons and, like the advertisements, they are bent on ‘selling’ their political agendas.” Student Hasaan Saeed is of the opinion, “Just like some songs are popularised by MTV and put in their top 10 lists, the media also pumps up some issues at the cost of others. Where is the citizen in the print and electronic media?”

Media monitoring revealed some examples to substantiate the arguments of selective reporting on the part of the media. For instance, in November, 34 innocent people were killed as they stood in a queue at a bank waiting to receive their monthly salary in Rawalpindi when a suicide bomb went off. However, that did not occupy the media attention as much as the political disagreement between President Zardari and MQM leader Altaf Hussain. Altaf Hussain, in an interview to an anchor person, had some “advice” for the president and hogged the limelight at the cost of the citizens who were killed in a terror attack. During the coverage of the IDPs, according to activist Abid Sultan, “It was very disturbing to see male media personnel enter tents and thrust mikes into the faces of the female IDPs. They should have known the cultural sensitivities of the IDPs. At the very least, common sense demanded that female journalists should have been sent inside tents to interview the female IDPs.”

Another example where the media created unnecessary hype was when allegations made by one of the leading newspapers in Pakistan against journalists and ex-army men working with Blackwater were made without any concrete proof and based on “hunches,” and an internet source.

Anchor persons and reporters have become opinion-makers in their own right. Since cross-media ownership is allowed, there is hardly any difference between the political leanings of the print and electronic media. Breaking news is not a phenomenon restricted to the electronic media. Leading newspapers have come out with front page stories alleging that a certain house is owned by Blackwater or that spies have entered the tribal areas disguised as journalists. This is not only irresponsible but also puts genuine tribal journalists at risk in an already hostile environment. There is now also a greater chance of being labelled an American spy. Another case of the media putting its fellow colleagues in jeopardy has been demonstrated in the case of Mathew Rosenberg from The Wall Street Journal who was also accused by The Nation of working for the US. This was protested by a consortium of international editors in a letter sent to the foreign minister causing the Pakistani government international embarrassment.

Apart from such high-profile cases, there are other smaller but equally significant cases of media irresponsibility. The media played a very important role in the lawyers’ movement, which should be appreciated. However, not all the coverage was impartial and responsible. Through commentaries and reporting by some media organisations, it appeared as if the media was taking sides.

Dawn News correspondent Ali Mustafa was reporting on March 15 from GPO Chowk, Lahore. After the police started teargassing the crowd, it took less than a minute for the correspondent to declare that the teargassing was ‘relentless.’ 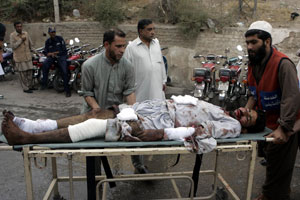 But to give credit where its due, Pakistan’s media organisations have drawn up some guidelines for the coverage of terrorism this month. Delayed reporting and prohibiting the showing of dead bodies were two of the stipulations. But only two hours after the framework was announced, all the TV stations announced that the sound of a bomb was “heard” in Islamabad. Minutes after the ticker ran, it was discarded and no follow-up done. The channels should not have aired unsubstantiated news. And once they had, it was their responsibility to declare that it was false.

This is not to suggest that there should be a government-imposed regulatory code on the media. That media houses are coming together to develop a voluntary code is welcome and shows maturity of the media landscape. However, the test is in the implementation.