The menace of loadshedding has disturbed the masses all over the country and protests against it are now commonplace. Punjab has been the worst hit and angry protestors have taken to the streets, creating an alarming law and order situation in the province.

The protesters accused the federal government of discriminating against the Punjab in its loadshedding management policy and subjecting its cities to nearly 20 hours of loadshedding a day, whereas other provinces where the PPP was in power were in a much better situation. That may well be true, but the manner in which the agitators registered their protest was highly undesirable. Shockingly enough, the police, which falls under the jurisdiction of the provincial government, did not intervene when the burning and looting was taking place under its very nose. In fact, when the houses of former Prime Minister Gilani’s adviser, Ahmed Yar Hiraj, and his cousin, Hamid Yar Hiraj, in Khanewal were surrounded by the protestors and attacked, PML-Q leaders claimed that it was their private guards who had to step in to control the situation. They had to resort to firing at the crowds, which resulted in the death of a protestor. A similar situation was seen in Kamalia at MNA Riaz Fatyana’s residence, where the legislator, along with his guards, was booked for the deaths of protestors who had allegedly stormed his house. 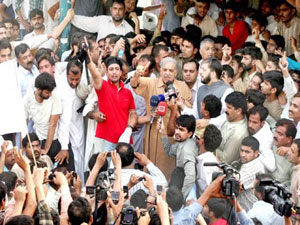 Criminal cases were registered against the guards, who in their defence stated that they would never have resorted to firing had the police and district administration moved in to avert the situation.

According to the latest reports, the Punjab police has registered cases against more than 4,000 persons allegedly involved in the loadshedding riots and vandalism that took place recently.

Meanwhile, the leaders of PML-Q and PPP have accused the Punjab Chief Minister Mian Shahbaz Sharif of instigating people to carry out the violent protests. The chief minister’s announcement that protests will continue until the loadshedding ends has been taken as a tacit approval of the violent demonstrations.

PML-Q leader Chaudhry Shujaat Hussain maintains that the Punjab CM should have considered his formula to resolve the energy crisis instead of encouraging street protests. According to Shujaat’s formula, had every province surrendered its share of the National Finance Commission Award (NFCA) for the last three months of the financial year, the funds could have been allocated to the power plants. Pakistan’s power-generation capacity currently stands at 23,000 megawatts, of which only 15,000 megawatts are generated daily because the plants lack sufficient fuel and other resources. Shujaat maintains that the funds from NFCA would have amounted to nearly Rs 50 billion and loadshedding could eventually have been ended in all the major cities and significantly been reduced in the rural areas.

However, PPP’s Chaudhry Aitzaz Ahsan defends the Punjab government, saying that the demands of the province were justified. “The menace of power theft is much more rampant in other provinces than in the Punjab,” he says, which is why he believes it should suffer less. “It is the Punjab which has to pay for the kundas in Karachi,” he stresses. 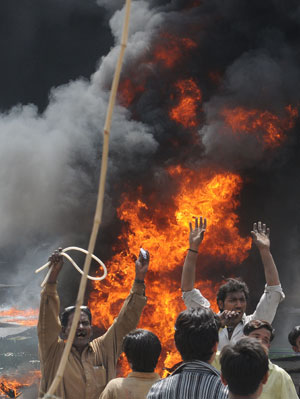 Recovery of dues is a good benchmark for devising load management policies and this is the model being followed by KESC in Karachi. Areas where the recovery rate is the highest in Karachi are subjected to minimal loadshedding. The same formula can be applied to other provinces and districts as well.

The Adviser on Interior Affairs, Rehman Malik, has warned Shahbaz Sharif that he might get an FIR registered against him if any PPP legislator in the Punjab is harmed and alongside, has offered the services of the Rangers to ensure law and order. He questions why only legislators from the ruling coalition in the federal government are coming under attack in Punjab.

However, the Punjab chief minister has denied all the charges levelled against him and has called for peaceful protests. His focus is on the fact that power consumption in the Punjab is 68% of the total national consumption while the province contributes 65% of the GDP. As 60% of the industries are operating in the Punjab, loadshedding has resulted in losses worth approximately Rs 400 billion to the province in one year alone.

Sharif also insists that the people who are deprived of their livelihood, have no other option but to come out on the streets, “Nobody can instigate or motivate them to do that unless there is a genuine reason.”

The removal of the National Transmission and Despatch Company (NTDC) managing director, Rasool Mehsud, by the new minister of water and power, Ahmed Mukhtar, and the decision to take back 700 MW electricity from KESC for distribution in the Punjab, are some signs that the federal government is finally getting serious about solving Punjab’s energy crisis. How the people of the Punjab respond to this gesture is yet to be seen.