Alchemy, a new collection by London-based artist, Faiza Sheikh, showed at the Canvas Gallery in Karachi, on June 11-15, 2012. An artist of Pakistani origin, who has lived in the West for over 26 years, Faiza says her message is that of positivity, optimism and hope, and her endeavour is to shatter myths and stereotypes about Islam and Muslims and to reiterate the fact that the message of all religions is essentially the same — one of peace and tolerance. “I paint the philosophy I meditate upon,” says Faiza, a slender, subtle persona, whose comparatively larger-than-life canvases provide a lush, flamboyant, sometimes velvety texture in opulent hues, as background to the thought-provoking and beautiful texts from the Quran, the Bible, the Bhagavad Gita and other spiritual, religious and literary sources that she inscribes from, set in silver and gold leaf. 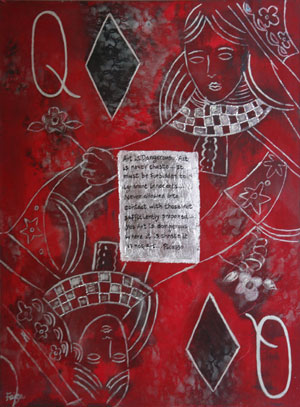 Faiza’s paintings are a celebration of life; her quest is to attain inner peace, learn to detach from the material world, gain redemption and remove all traces of negativity from her ambit. Sheikh uses the verses of Rumi, Rabindranath Tagore, Shakespeare and Chaucer to express her message. Her canvases display selections of text, prominently etched on her trademark gold and silver leaf, showcased on a canvas suffused with bold lashings of colour. Interestingly, two paintings, ‘The King of Hearts’ and ‘The Queen of Diamonds,’ displaying quotes of Picasso and Einstein, differ from the rest. Though conceptually interesting — premised on the concept of destiny, where life is like a game of cards — they do not appear technically as sound as some of the others. ‘A Lover’s Complaint,’ which features a nude figure and a stanza from Chaucer’s ‘A Complaint to His Lady,’ is also different from the rest; once again, Sheikh refrains from devotional imagery and the poem speaks of the deep pain of unfulfilled love. In ‘Victory’ and ‘Journey,’ the images of the small, refined, Arabian horses denote courage when embarking on a quest, whereas ‘Trance,’ inscribed with a Persian verse by Rumi, provides a clarification for the quest: “On the way of quest, the sane and insane are one/On the way of love, relatives and strangers are one/Whom the wine of the beloved’s union was given, in his religion, the Ka’aba and idol temple are one.”