It took a long time coming, but when it did, not many within the media industry were surprised. All is not well inside the media machine, but strangely, viewers are just finding out.

The now infamous interview of real estate tycoon Malik Riaz on Dunya TV and the leaked footage of banter between the guests and anchors during a news break came as a shock to an unsuspecting media consumer market. That one single incident transformed the hunter into the hunted. At about the same time, a mysterious list appeared on the social media and added insult to injury. The list — which is highly suspect — was made on a Bahria Town letterhead and carried names of prominent journalists and details of alleged payments made to them by Bahria Town. The timing of the list could not have been worse. Despite being highly dubious, it found traction among a wary public smarting from the blow of the Dunya TV interview. Suddenly all media was suspect. And corrupt. And in bed with the power-wielders it criticised daily. Something, somewhere had gone horribly wrong.

This ‘something’ and ‘somewhere’ is not really a mystery if one digs a little deeper into the inner working of the Pakistani media industry. Plagued by unprofessionalism, vested interests, twisted values and domineering commercialism, the media is groaning under the weight of its own contradictions. The face it shows to the world through its screens and front pages — laced with sanctimonious verbiage — is not the real face. This Janus-like way of operating has finally begun to bite.

But is the bite hurting? For a while it may, but sadly the controversy will blow over. Once that happens, it will be back to business for the media till a new scandal erupts. The need to reform is fleeting, because those opposing reform are the biggest beneficiaries of the status quo within the media industry.

In Pakistan, media means money and power. A deadly combination by all standards. With its vast reach and access to the highest offices, the media platform is all too open — and tempting — to abuse. Hiding vested interests, personal, political and commercial agendas within the folds of the news and current affairs is fairly simple. In mature media markets, however, such abuse is checked through a journalistic value system. Journalism’s professional requirements act as a barrier to distorting truth and fact in order to extract gains. It separates right from wrong, ethical from unethical. 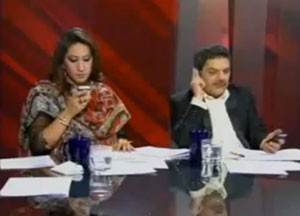 This is why Pakistan’s airwaves are a sacred trust of the people licensed to an entrepreneur in the name of the citizens of Pakistan. These airwaves belong to the people, not to any one individual or a group. The entrepreneur can extract profit from the license he has paid for, but his ultimate responsibility is to use these airwaves for the larger public good. If he is using them for his own vested interests, he is violating the sacred trust bestowed on him by the state in the name of the people.

Unfortunately, this is where the problem starts in Pakistan. Right from the top, commercial factors dominate from the start. Content is then tailored accordingly, regardless of its merit. Saleability trumps credibility. Balance sheets dictate editorial sheets. Marketing and product development personnel become gatekeepers to content instead of journalists. The mantra is not ‘inform, educate and hold accountable,’ but rather, ‘sell, sell, sell.’

Some do it less crudely than others, but all follow the same model. Owners, news managers, anchors, producers, reporters all follow the commercial Pied Piper. Journalists may crib and cry, but there’s little they can do except opt out of the industry. They have become part of the unholy nexus which sees media peddlers peddling their wares to power peddlers, who in turn peddle their political interests to media peddlers — all on the basis of the platform they have acquired in the name of the people of Pakistan.

The Dunya TV exposÃ© is merely the tip of the iceberg. The rot within is spreading like cancer, infecting vitals and weakening the body. A code of conduct at this stage would be nothing more than one stitch on a gaping wound. Much deeper and broader reform is required if journalism is to be saved in Pakistan. Such reform can only be instituted if there is institutional consensus to back it. No single c hannel, or media organisation can undertake such an exercise. All stakeholders — including the government, the parliament and advertisers — have to provide input for a comprehensive reformation of the media, before it is too late.

The problem is the stakeholders themselves. The owners have little incentive for reform as long as the cash machine keeps ringing. The news managers and anchors stay on the owners’ right side because they get their fat paychecks, politicians in government and parliament tread softly as they need the media for their own use, the advertisers play along as their checkbooks cast a deep shadow over editorial content, and the viewer…well, the viewer sits at home and consumes the digestible but unhealthy content being spewed out of his TV screen.

When everyone has a finger in the pie, who would want to reach for the remote?

This article was originally published in the July issue of Newsline under the headline “In the Eye of the Storm.”