Lots of photographers, lots of photos, but not enough space in Photospace — that should give you the gist of theImprints exhibition held at the gallery earlier in June. Nine photographers were invited to display works that comment on how people leave their imprints behind on objects and spaces. The result was a mixed bag, as it would be if you take a handful of images each from a diverse group of photographers and place them side-by-side in a relatively small gallery.

Malika Abbas’s black and white photographs taken with a single-lens Kodak film camera were displayed right next to Nubain Ali’s iPhone photo series. Abbas and Ali’s approach to photography could not have been more different but their works were certainly amongst the highlights of the exhibition. Upon learning the theme of the show, Ali figured that the photos he takes with his cellphone are in a sense an imprint of his life, and that too on a device that can easily be lost and stolen. He, therefore, took two years of photographs from his phone and then printed them in the form of a massive grid. Ali likens the end result to a contact sheet, but the series of images also functions as a film reel of sorts, introducing the viewer to the places Ali has visited and the people he has met. His work also comments on how social media affects the way people document their lives and he believes that by creating timelines on Facebook and Twitter, people are creating online imprints of themselves.

Malika Abbas’s photographs consisted of stark shots of a building being constructed (or was it being demolished?), with the inner skeletal structure exposed for the world to see. The beams and slabs fan out, almost mimicking the cage-like structure of crinoline. On their own, Abbas’s photographs are beautiful. But in the context of the imprints theme, her interpretation isn’t necessarily the most thought-provoking. 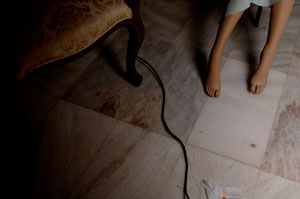 Many group exhibitions suffer from this problem and in the case of some shows, it seems that the curators deliberately use vague themes so that more work can be included. This often results in unevenness in the collection as a whole and while it is certainly important to promote as many artists as possible, sometimes these shows work to the detriment of younger, emerging artists. For example, the two photographs by Qamar Bana of a graveyard and an unattended restaurant table were overshadowed by Tapu Javeri’s larger photographs that were displayed right next to hers. 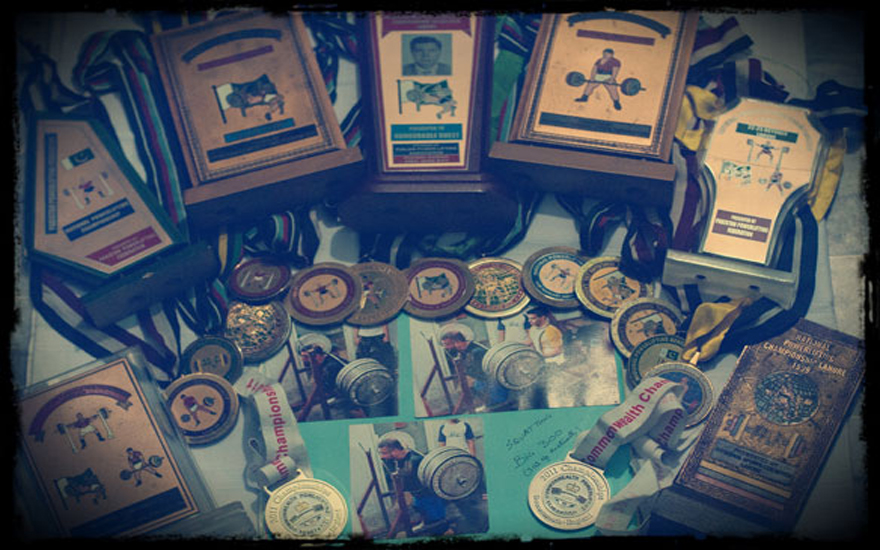 Javeri took a slightly different take on the theme and instead of looking at the imprints people leave behind on spaces, he decide to address how spaces and objects affect people. He took photographs of chairs and staircases and then projected them on the torsos of male figures — resulting in highly stylistic images that looked Photoshopped but actually were not. Another photographer who had a more conceptual take on the theme wasnone other than Arif Mahmood, who also curated the show. One of his photographs focused on a pair of doll legs on a marble floor, another on an empty plastic bag lying on a bed. The photographs were charged with a sense of emptiness, of abandonment, and were a departure from his regular portfolio of more naturalistic photographs.

Others worth mentioning include Stephen Andrews, whose faded photographs of weight-lifting trophies were tinged with nostalgia and Hameed Moinuddin whose photographs were of visually striking graffiti he found on the streets of Berlin. But again, both Andrews and Moinuddin’s work may have had a better impact if they were provided the space to show more photographs from their respective collections.