Still conforming to rhythmic arrangements of horizontal, spherical and tubular shapes, paintings from Imran Mir’s Eleventh Paper on Modernism, shown recently at Koel, reaffirm his considerable mastery of the modernist grid. As we register the presence of serial and repeated patterns or elements in his paintings, we think of order and structure and of the inorganic mingling with the organic but, most importantly, we are reminded that his work is about the creative, rational field of painting and not about social, emotional, or political issues.

The strength of the collection resides in the quality and range of the work. The mathematical purity in the tightly patterned geometrical figures comes out to advantage through a vast array of linear variations the artist has at his command, an economical palette of primaries — just red, blue and yellow — and a dramatic and effective use of space. In his irregular grids, there is a sense of information pouring through that cannot be decoded but that can be shaped and tamed by painting. Along with the stark geometrical forms, there are undulating shapes and gestural squiggles where lines jiggle out and across like computer blips. In some paintings an intricate network of circular lines collide and implode on top of each other, creating a complex play of turbulence and tension with hints of freedom and euphoria. 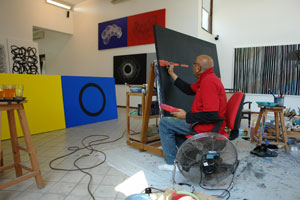 Imran Mir in his studio.

In Mir’s geometric lexicon there is frequent recourse to the repetition of the circle, a shape that can be considered to be an abstraction of the desire to penetrate. Spun in several layers, this tangle vacillates between chaos and a dynamic cellular order that invites the viewer to study the construction and to visually penetrate the interior of the object. Other elliptical and tubular forms in his repertoire also possess the same repetition and variance — as if something impersonal is being transformed by a highly personal, eccentric treatment.

Exploring the elements of art without the need to connect them to real imagery, Mir’s paintings evince the idea that all meaning resides in the physical object itself, rather than in its metaphorical content or relationship to the outside world. Here, content and form are not separate, in contrast to older forms of art where content ruled form.

For most modern artists and designers alike, geometry represents a distillation of the modern world. Through the use of pure forms such as the circle, square or line, or through fragmenting form and plane, the dynamism of the modern world can be condensed into pattern. Today, when most postmodern art is dispersed, chaotic, indeterminate, multicultural, subjective and populist, this art of the modernist era comes across as centred, determinate and objective. Imbued with European theoretical values, its spartan, streamlined form opts for simplicity and elegance.

Throughout 20th century art discourse, critics and artists working within the reductive or pure strains of abstraction have often suggested that geometric abstraction represents the height of a non-objective art practice, which necessarily stresses or calls attention to the root plasticity and two-dimensionality of painting as an artistic medium. From the technical point of view, there are as many ways of applying paint to a surface as there are abstract painters, and Mir, firmly anchored in his niche, continues to refine, polish and reshuffle an established and proven vocabulary with novel twists and turns that tease the eye and stir the imagination.