In a world increasingly dominated by graphic imagery, ‘looking’ at visual information today is rapidly displacing the act of ‘reading’ textual information, and this shift reflects directly on the quality and content of the photographed image. The viewer must now have the cognitive ability to distinguish between the trite and the commonplace, and the genuine and the heartfelt image. An effort to raise the bar of the photographed image was apparent in a photography exhibition, “Images: There and Then,” currently showing at the Mohatta Palace Museum. By inviting some of the country’s finest photographers to capture the hue and temperament of a land and its people through their individual lens, the curator went beyond the average tourist portfolio visuals of Pakistan to assemble a perceptive, thought-provoking collection.

Focusing on people and their environment, this exhibit is essentially culture photography by as many as 16 photographers whose interpretations, spanning from the traditional to the postmodern, have been knit into a composite whole by curator Nasreen Askari.

Acclaimed veteran Syed Javaid Kazi’s insightful collection of photographs (example, “Ageing Together”) was illustrative of his considerable acumen as a documentary portrait photographer interested in recording culture for historical and artistic purposes. But it was his eye for detail — a feel for authenticity and clever play with light to reflect what is real — reconstituted in luminous, grainy, black-and-white prints, that infused his portraits with the gravity of art. The unaffected beauty of the girl child and the innocence of boyhood was captured equally well by Umair Ghani and Daanish Tapal, but theirs was a light-hearted approach in terms of both their choice of subject and its projection. Accentuating religious ritual and folk culture through the human form, Kohi Marri’s “Gunga at Sufi Festival” was a picture story where narrative was built through gestural body language and the persona of the subject as well as an emphasis on strong chromatics (which just might be digitally enhanced).

This ability to skillfully zero in on gesture, glance and movement, was common to most photographs. Absorbing the spontaneous behaviour of their subjects in environments charged with aesthetic tension, the photographers captured attitudes, norms and typicalities at several levels. Izdeyar Setna’s “Prisoner City Courts Karachi” chronicled the travails of captivity. A critical take on child labour, Ayesha Vellani’s “Children of Brick Kiln Workers” was easy on the eye but heavy on the heart. Asim Akhtar, one of the few photographers who can tune profundity and aesthetics to a fine pitch, captivated the viewer with his “Bathers — Borit Lake, Ishkoman” series. Imbuing the glacial northern landscape with a pristine purity, he transformed the simple act of bathing in the lake into an intriguing experience.

In sharp contrast to the joyous simplicity of nature, Amean J’s “Urban Landscape” image, a charred corpse of a vehicle, spoke of another palpable reality — the physical and psychological tension generated by the current climate of fear, violence and destruction that surrounds us. Other concrete realities of the urban landscape — “Lahore Railway Station” by Farah Mahbub and “New Kaiser Hotel” by Arif Mehmood — reminded us of colonial legacies and how they still continue to permeate our lives. 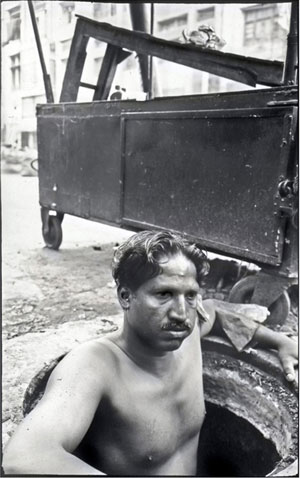 Urban detritus, an enormous health hazard, is yet another face of city life. It is said that Malcolm Hutcheson consistently points out and photographs what we do not want to see. His seemingly uninteresting and ordinary but perhaps among the most message-driven images in the show, the “Gunda Nullah” series, dwelt on the mismanagement of sewage waste in the city of Lahore. He consistently photographs the poor and how the environment impacts their lives to ferret out root causes of social ills. Preferring to photograph with the most basic equipment, the surfaces of his images are marked with scratches and dust, showing the circumstances under which the images were made.

Appealing and attractive to look at, images of the Kohli tribe of Mitthi by Akbar Khushik spoke of beauty in simplicity and document a primitive lifestyle still in existence in the 21st century. But often the happy face of underprivileged communities masked the hardship and sadness that surrounds their life of poverty, illiteracy and disenfranchisement. Unlike the spontaneously shot images, a ‘posed’ photograph of a group of transvestites as a candid portrait of gender constraints was also true to life.

Spectacles in motion are among the most difficult subject matter to capture. In most cases you only have a fraction of a second to choose an interesting subject, focus your camera, choose your zoom-setting, and press the shutter. To make the most of your experience as a photographer, you need to be ready to take snap decisions. Several images at the show encapsulate the split second ‘moment,’ but it was Shamyl Khuro’s “Khattak Dancers” that dwelt primarily on movement.

Possessing a keen sensitivity to the human condition and with minimal emphasis on technical manipulation, the photographers exhibiting at this show have tried to look beyond the surface to capture a deeper, richer culture on film. In this attempt to depict the essential character of the photographed environment, they have tried to preserve the integrity of the image.