Just a few hours before the opening ceremonies were scheduled to begin on Friday, tragedy struck the 2010 Winter Olympics in Vancouver. Georgian luger Nodar Kumaritashvili died in a crash in a pre-games practice run at the mountain resort town of Whistler, B.C., the site for luge and other select events, including alpine skiing.

Luge, if not the most dangerous sport in the Winter Olympics, is considered to be the fastest. Kumaritashvili went off the luge track at 140km/h.

The luge track on Blackcomb Mountain is characterised by steep slopes and has been described as “wild.” It has 16 turns over its 1,450-metre course and has the longest drop of any track in the world, reports the CBC.

The sled of Kumaritashvili overturned going around the fastest curve of the track and the athlete was thrown over the railing and into a metal pole. 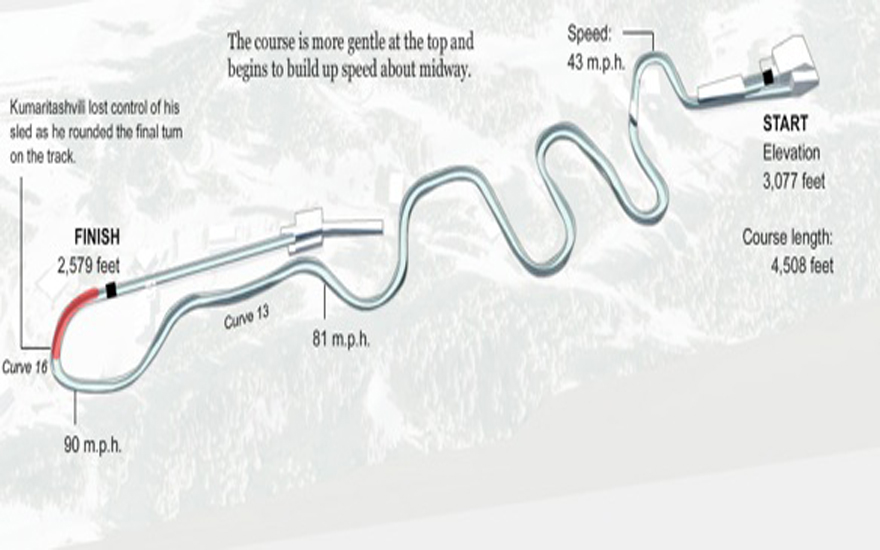 Immediately after the news broke confirming that the 21-year-old luger had died, criticism erupted. People quickly questioned how un-padded metal support poles could line the perimeter of the track, just inches from the tracks edge. But criticism and concern about the design of the icy raceway had already been voiced. Athletes were calling the track the fastest in the world, saying that it pushed the limits of luge. Before Kumaritashvili’s terrible accident, more than a dozen crashes had already taken place during test runs by both men and women lugers. One crash involved the world’s top men’s luger, Italian Armin Zoeggeler. A day earlier, women’s luger Romanian Violeta Stramaturaru crashed and was airlifted away. One luger had the guts to go on the record and say that besides being fast, the circuit was “dangerous.”

Olympic officials said an investigation was already underway. That is good. But clearly this track that has pushed the limits has pushed them too far. Changes need to be made and enhanced safety precautions need to be taken before more injuries and deaths occur — the first scheduled event is on Saturday evening, and delaying it should not be a concern. There has been talk that in order to slow speeds down the track may be shortened by moving the start line farther down the track. That would be a move in the right direction. Because at the current pace, Canada’s games are moving downhill fast.