Is the conflict between the Supreme Court (SC) of Pakistan and the government of President Asif Zardari gathering momentum or tapering off? Certainly, skirmishes have broken out on several fronts. But a showdown is not round the corner. The SC seems ready to step back from any major destabilisation of the Zardari regime and the government seems ready to make some concessions to the court. It is also looking increasingly unlikely that Mr Zardari can be knocked out of the presidency by the court.

Maulvi Iqbal Haider, a maverick lawyer, has filed a petition with the Chief Election Commissioner (CEC) asking him to retroactively re-examine President Zardari’s eligibility to contest the presidential elections in light of the National Reconciliation Ordinance (NRO) judgment. The petition asks the CEC to determine whether Mr Zardari is a good Muslim or whether he was ever convicted in the BMW case. If adjudged guilty of either sin, he can be disqualified from being a member of parliament and ousted from the presidency. But according to the National Accountability Bureau, the case was trumped-up and Mr Zardari was bailed out in 2004 and never convicted in absentia later. The question of being a good Muslim is a non-starter too. In 1985 a petitioner challenged the Islamic credentials of a competitor in an election and the SC threw out the petition, arguing that it was well nigh impossible to determine who was a good Muslim or not. Therefore, neither of these cases will amount to much.

However, questions are now likely to arise regarding Mr Zardari’s position as president and PPP co-chairman. Under Article 17(2) of the constitution, anyone in the service of Pakistan cannot belong to any political party. Mr Farooq Leghari formally resigned from the PPP before taking oath as president of Pakistan in 1993-94. On the basis of that precedent, Mr Zardari may have to relinquish his position in the PPP if he wants to hang on to the presidency. The problem is that his power flows from the party rather than the presidency, as is evident from his recent attempts to motivate and whip up the party in the face of threats to his presidency and government. So it seems he will resist any attempt to deny him the leadership of the party. That could be problematic.

But the crunch will come if the SC directly targets the prime minister, Yousaf Raza Gilani, for not carrying out its order to direct the Swiss government to reopen the money laundering case against Mr Zardari that was closed on the request of the Zardari government after the NRO was executed by the Musharraf regime in early 2008. In this context, an attempt was made on January 28 to whip up a section of the anti-PPP lawyers against the government for dragging its feet on implementing this SC order. But it was thwarted by a bigger section of the lawyers which feels that this accountability is pretty one-sided and the SC is overstepping its domain and creating unacceptable political ripples that could undermine the political system. The division in the lawyers is now palpable.

Understandably, the army’s leadership is coming in for a bit of flack. Until now, Mr Zardari and a section of the independent media had pointed fingers in the direction of GHQ, alleging that the khakis had destabilised the government on the issue of the Kerry-Lugar Bill some months ago and might be winking at other anti-Zardari elements to go for his jugular. Now, Maulana Fazl-ur Rehman of the Jamiat Ulema-e-Islam has openly accused GHQ of political meddling and warned that the democratic system is in danger. This is no mean allegation. Maulana Fazl is normally a very careful and circumspect man who never strays too far from GHQ. Something must be terribly amiss for him to be thundering against the “agencies.”

The fact is that the popular mood in the country is changing. Few people like Mr Zardari. But more and more are becoming convinced that he is being singled out for some sinister motives by the Punjabi establishment and that getting rid of him will not necessarily usher in the long-awaited salvation promised by his opponents. Indeed, the increasing fear is that by targeting him to the exclusion of the other alleged crooks among the politicians, military and media, the establishment may end up alienating the smaller provinces and open up a Pandora’s Box of national contradictions that invite hostile foreign powers to intervene and dismember Pakistan. Something like this has finally got into the mind of Nawaz Sharif who is no longer sure that he will be a beneficiary of the successful outcome of the Get-Zardari campaign. A split seems to have emerged in the Pakistan Muslim League-Nawaz, with one section urging Mr Sharif to give one final push to Mr Zardari and go for a mid-term election, and another that is cautioning restraint lest the powerful army and the resurgent judges and media make common cause against all politicians and devise a new caretaker system antithetical to them all. 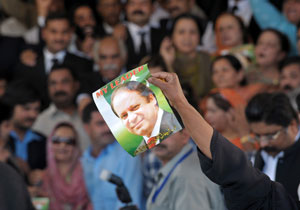 Nawaz Sharif is no longer sure that he will be a beneficiary of the ‘Get-Zardari’ campaign. Photo: AFP

In the next few weeks, the army may have to show its hand. Does it stand with the government, as ordered by the constitution to do so under all circumstances since the organs of the state are supposed to obey the legitimately elected government and parliament of the day, or with the SC that is increasingly perceived to be “going after Zardari?” If the army follows the constitution, stability will return to the country (even though corruption will not go away). If it doesn’t, we will jump from the frying pan into the fire.

But there is hope that we will pull back from the brink. President Zardari seems amenable to taking the advice of the chief justice regarding the appointment and promotion of judges. And the SC seems cognisant of the huge risks involved in pursuing one-sided accountability.