The H1N1 virus, popularly known as swine flu, that has claimed the lives of thousands, creating panic and concern the world over, is now being dubbed as the most overrated story of 2009 by the European Union (EU). The EU holds that panic about the flu was falsely generated by the World Health Organisation (WHO) to promote their “potentially dangerous vaccination strategies.”

As the EU prepares to fully investigate this matter, which it refers to as the “biggest medical scandal of all times,” in Karachi, it has initiated a debate among medical experts and the general public as to whether the level of outbreak was really as severe as portrayed in media reports.

“We cannot deny that we are facing an outbreak,” says Dr Iftikhar Ahmed, associate professor of medicine at the Dow University of Health Sciences, Karachi. “But the panic and sensation accompanying that outbreak has created a lot of fear and confusion among the people as there is little information available regarding what exactly swine flu is and what is it that they are preparing against.” In Pakistan, he says, the situation is not as dangerous as it might be in other countries.

Dr Ahmed adds that this outbreak is nowhere near the pandemic of 1918 and 1919. Known as the Spanish Flu, the influenza pandemic affected as much as half of the world’s population, killing around 50 to 100 million people. Experts and doctors believe that it may have been caused by an unusually virulent Influenza A virus strain of H1N1 subtype. In the United Sates, 500,000 people died and in India 17 million people lost their lives as there were no vaccines available at that time. Most of the victims of this flu were healthy young adults as compared to those of swine flu, which is fatal mainly for those who are old and already have heart or lung disease.

Dr Bushra Jamil of the infection control committee at the Aga Khan University (AKU) thinks otherwise, and says that it is necessary to create awareness whichever way we can: “In our case, it is extremely necessary to be prepared for such things.” Speaking about the spread of Spanish Flu, she says that the pandemic was also considered to be mild at first but it created a lot of havoc later, so there’s no problem in being over prepared.

Meanwhile, the ministry of health is taking all preventive measures to curb the spread of the disease by distributing anti-viral medicines like Osaltamivir (Tamiflu) to all hospitals in the major cities.

So far, the National Institute of Health (NIH) Islamabad has tested 847 suspected cases of H1N1 virus which were sent from different hospitals across Pakistan, and confirmed 192 to be positive for swine flu. As for the lives the flu claimed, the NIH confirmed 14 deaths around the country. Of the fatalities, two were from Islamabad, eight from the Punjab, three from NWFP and one from Pakistan-administered Kashmir.

When contacted, the executive district officers of Larkana and Khairpur stated there were no cases of swine flu reported in 2009 or at the start of this year. Similar statements were received from Nawabshah, Sanghar and Hyderabad. Only one patient with swine flu symptoms was tested positive at Sukkur hospital “but was discharged after he recuperated within a week,” says Dr Tariq Abbas Dareshani, EDO health, Sukkur. 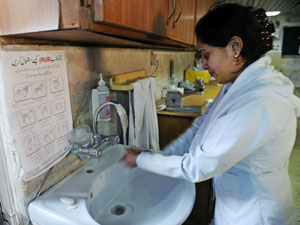 In April 2009, speculation pertaining to a swine flu pandemic started after a widespread swine flu virus outbreak was witnessed in Mexico. In June 2009, the WHO declared swine flu a global pandemic, giving it a level 6, meaning a full-fledged outbreak, stating that the disease spreads rapidly through human-to-human transmission. After the declaration, almost every country joined in the frenzy to procure vaccines to suppress the virus.

In November 2009, blood samples of some 24 patients were confirmed positive by the AKU lab in Karachi and were later sent to NIH, which confirmed five of those samples as positive. Dr Jamil says that she still receives outpatients with swine flu symptoms but, “the number has decreased since the start of this year — however, this does not mean that people are not still being infected.”

For an average Pakistani, to pay the fees for a simple blood test at AKU is quite expensive so the majority of them opt for Civil Hospital (CH) or Jinnah Postgraduate Medical Centre (JPMC) in Karachi, which are funded by the government. According to sources at the hospital, CH and JPMC have still not received the bulk of the medicines they were supposed to be given by the health department.

According to statistics provided by WHO, the health ministry distributed around 50,000 capsules of Tamiflu in the Punjab, 30,000 in Sindh, 4,000 in the NWFP and 4,000 in Balochistan. In addition, thermal scanners have been installed at the major airports in the country such as Lahore, Islamabad, Karachi, Multan, Quetta and Peshawar.

“The thermal scanners can only detect the body temprature and cannot diagnose a person with swine flu, so relying solely on them would be a little senseless,” says Dr Ahmed, adding that the virus can even be spread by a person without entering a country.

Dr Ahmed says that what came as a blessing in disguise for Pakistan was that we braced ourselves to face the situation beforehand. “We need to focus more on concerted efforts as policy-making or planning is not a one-man show, so there is a need for policy makers to sit with the media and doctors, and to collect data and ask questions as to what to do, and investigate the reasons behind the deaths which occurred.” The basic objective at this time should be to immunise the general public, for which, he says, “the vaccines need to be in the country at our disposal so we are already immunised when the next bout of influenza hits the nation.”