Sending shock waves through the nation is the government’s decision to allow Azam Tariq, the leader of the outlawed extremist religious party, Sipah-e-Sahaba, to stand for a National Assembly seat from Jhang. While many anti-military politicians have been barred on corruption charges, or disqualified by the graduation clause, the sectarian leader whose hands are bloodied by scores of murder cases, has been given the freedom to spread religious hatred and violence once again. The Musharraf government, which has vowed to eliminate extremism, has apparently given its blessings to a known terrorist to contest the elections.

Increasingly isolated, the military regime is now trying to mend fences with their estranged allies among the Islamic radicals and the list of pro-military candidates from Sindh prepared by the regime, includes many MMA candidates. Even this last ditch attempt at political expediency, however, is not likely to help the military government much.

The military’s alliance with some of Pakistan’s most corrupt politicians has also raised serious questions over President Musharraf’s pledge to fight corruption. The military regime’s backing of Chaudhry Shujaat Hussain has evoked strong criticism from political parties. The Chaudhries are allegedly, not only involved in the infamous multi-billion rupee cooperative scam, but have also had numerous loans written off. Similarly, the military has propped up Imtiaz Sheikh, a notoriously corrupt former bureaucrat, to counter the PPP in Sindh. The leader of the Sindh Democratic Alliance (SDA), Sheikh is believed to be one of the most corrupt civil servants who rose to power under former Sindh Chief Minister, Jam Sadiq Ali. Sheikh is now seen as the military’s candidate for Sindh’s chief ministership.

Elections 2002 are, to a great extent, reminiscent of the 1985 non-party based polls conducted by another military dictator. Although this time around, political parties have been allowed to participate, rampant allegations of pre-poll rigging, coupled with the absence of the main political leaders from the scene, has restricted the election campaign to local issues. 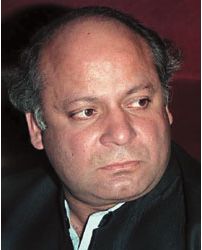 With Benazir Bhutto, Nawaz Sharif and Altaf Hussain, the leaders of Pakistan’s three major parties forced into exile, Pakistan, for the first time, is witnessing the phenomena of absentee leaders running their election campaigns through remote control. The absence of the three leaders and their disqualification from elections is one reason behind the most lacklustre election in the country’s history. Their political clout, however, has not diminished. Despite the military government’s best efforts to wipe out their influence, they continue to cast their shadows over the country’s politics.

Thousands of MQM supporters holding photo-posters of Altaf Hussain frenziedly chanted, “Long live the Quaid,” as the self-exiled mohajir leader began his long-distance telephonic address, kicking off his party’s election campaign. In his hour-long rhetoric at a rally at Karachi’s Nishtar Park, he called for a new constitution providing full autonomy to the provinces. The MQM is back in the electoral race, having donned a brand new multi-ethnic party image in an attempt to shed its narrow mohajir base. “We want a new federal contract,” declared Altaf Hussain. A British citizen now, he has been running his party by remote control during his 10 years of self-exile in London. Having been convicted on several murder and criminal charges, there is little hope of Altaf Hussain ever returning to Pakistan, but that has not weakened his stranglehold over the MQM which is trying to regain its political grip over the country’s largest, and most troubled cosmopolitan city, Karachi.

Benazir Bhutto, who spends her time between London and Dubai, relies mostly on international television and newspapers to propagate her political views and to fight military rule. Despite her fall from grace, due to the many corruption charges she faces, Bhutto remains a major attraction for the international media. “No decision, whether it is a policy issue or choice of candidate, can be taken without her approval,” maintains a senior PPP leader. Though it is the first time that no member of the Bhutto family is standing in the elections, she is still a major factor in the PPP’s stable vote bank. According to an opinion poll conducted by Newsline in five major cities, the PPP appears to have the largest support base.

Meanwhile, the ban on Nawaz Sharif using Saudi Arabia as a base for his political activities, has more or less thrown him out of the electoral race. Unable to play any significant role in guiding his party’s election campaign or addressing telephonic rallies, Sharif is confined to running the party through his party leaders. The list of the PML(N) candidates was approved by him and he is in constant touch with party candidates. However, his absence and the split within the party ranks, has restricted his ability to mobilise public support as compared to his political rivals, Bhutto and Altaf Hussain. 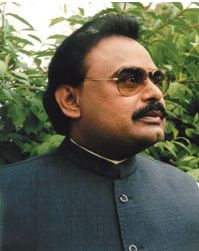 With only one week to go for the polls, election activities have yet to pick up and the outcome remains totally unpredictable. The situation seems to be much more fluid in Punjab where no party appears to be in a dominant position. Despite the administration’s full backing, the PML(Q) and the Grand National Alliance are unlikely to sweep the polls. There is, however, a strong likelihood of most pro-military candidates being routed through negative voting as happened in General Zia’s 1985 non-party based elections. There are strong indications, however, that the military will do everything in its power to prevent a replay and most political parties have accused the provincial administration of openly helping pro-military candidates.

Political observers agree that in Sindh the results will not be very different from the past. The PPP has regained its traditional support base in the rural areas, while the MQM is most likely to sweep Karachi and other cities. The Islamic parties, under the Muttahida Majlis-e-Amal banner, are expected to fare marginally better this time. In Balochistan too, there is no likelihood of any dramatic change in the political balance, with seats divided among various Baloch nationalist parties and the MMA.

In the Frontier, however, the alliance between the PPP and the ANP may have a dramatic impact on the province’s politics. It is the first time that the two political rivals have entered into an electoral adjustment thus strengthening the anti-military alliance. The MMA may also make some inroads by exploiting the growing anti-American and pro-Taliban sentiments in the province. The MMA also seems to have the backing of the military establishment which wants to contain the PPP-ANP alliance. There are some credible reports that President Musharraf’s government has reached an understanding with some of the MMA’s component Islamic parties. Despite their conflict over President Musharraf’s turnaround on Pakistan’s Afghan policy and joining the US-led coalition in the war on terror, the traditional link between the military and the Islamists has never been fully severed.

The thaw in relations between the military leadership and the Jamaat-e-Islami, the Musharraf regime’s most vocal critic among the Islamists, occurred last month after a three-hour-long meeting between President Musharraf and Qazi Hussain Ahmed. According to sources, the Jamaat leader told the General that his party has always stood by the military, despite their differences over the regime’s support for the United States. There has also been a marked softening in the government’s rhetoric against religious extremism as the elections draw closer.

Most political observers believe that the votes in the expectedly low turnout, will largely be cast on the biradari and ethnic basis. This is bound to further consolidate the political influence of the traditional power brokers. Despite a few changes of face, the same old feudal families are still in the arena. Many old stalwarts who were disqualified by the graduation clause are still in the race through their proxies and have launched the next generation into politics. The class composition of the future Assembly will hardly be different from the past. Most observers believe that the same 450 influential families will continue to hold sway over the country’s power structure. A situation which certainly suits the military who is looking for an easily manipulated and pliant Assembly.

Despite the government’s best efforts to manoeuvre a favourable result, the outcome of the elections remains highly unpredictable. Even in these managed elections, the National Assembly is expected to be dominated by mainstream political parties opposing President Musharraf’s move to concentrate all powers with himself. Most observers predict continuing political instability, while clashes seem imminent between the President and the future elected representatives. It is not likely that the Assembly will allow the President to run the government with a lame-duck Prime Minister. President Musharraf’s “tailored democracy,” has slim chances of survival.

The people have little faith in the elections which are already marred by widespread allegations of pre-poll rigging, and even less faith in a system where the source of power will lie outside an elected forum. However, the current election process has created its own political dynamics which could well lead to the demise of the Musharraf’s regime’s carefully crafted system, designed to give the military a permanent role in the country’s political scenario.